A man grips tightly onto the staff he holds, looking warily to the left. His head is bandaged, showing a recent injury. He wears yellow boots, a red tunic and the sleeves of his shirt are rolled up. The ground he is stood upon is flat – a road or pathway. Behind him, eight wands are struck into the ground like a fence or barricade and each is in leaf. Behind the fence of wands is vast expanse of sky and rolling green hills. 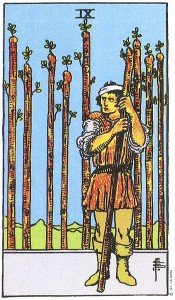 This man has been through a battle. He’s been wounded but he’s still standing and ready for more by the look on his face! Despite his injury, he is not about to give up, there is too much at stake. He will defend his freedom and his ideas. Freedom is denoted by the large expanse of sky and connects to the Sagittarius energy of this card. Wands as a suit connect with ideas, will and desire.

When the Nine of Wands appears in a spread, it is time to roll your sleeves up and pitch in. There is just one more hurdle to overcome, one more test, one more obstacle to navigate before you reach your goal. This is a card of resilience and persistence and advises that you keep going. It may be hard work, but you’ve got what it takes. Conquering your own fears may be half the battle.

It’s time to stand up for what you believe in. Stand firm in the face of adversity. You are so near to your goal. Don’t give up now! Sometimes it is hard to stay fighting when you have been knocked down but the Nine of Wands suggests that the battle is worth it. Don’t take it lying down. Yellow is a colour associated with courage as it connects to the solar plexus chakra. The yellow boots that the man wears show that courage will get you to where you need to be. The red of his tunic says, stay with your passion, it keeps you feeling alive.

In the preceding card of this suit, the wands are still up in the air. Now in this card the eight wands are struck firmly into the ground. This shows you have wisdom and experience on your side as well as breadth of vision. The man in the card however only holds one wand. It may be necessary to focus on one single goal or have a single minded approach in order to achieve your desire.

You may need a crutch, something or someone to help you through this difficult period. Maybe you need to let someone else take over for a short time whilst you gather your strength. This card can indicate the point when delegation is needed. Note that the next card in this suit often relates to feeling overwhelmed and carrying too many responsibilities. It is within the Nine of Wands where we learn that we cannot do it all alone.

It may be that you need to be on your guard and be watchful of people or events that might cause difficulties ahead. Whilst it is advisable to be aware, it is also important to push forward with plans and not to become stuck in a defensive position. Plan for the worst but hope for the best. Vigilance is necessary however keep in mind that just because you were hurt before, doesn’t mean you will be hurt again. The wound on the man’s head in the card can indicate psychological wounds as well as physical. Don’t allow negative experiences to fester in your mind.

The wariness indicated by the upright position of this card is tipped over into paranoia reversed. You may feel fenced in by perceived threats all around. Check in with yourself – what do you really believe?

Previous hurts may have made you feel like it’s not worth trying because there’s always someone who wants to knock you down.  Maybe you don’t want to commit for fear of being overwhelmed. Either way, you are hurting yourself more by fighting to stand still.

Distrust of others has left you feeling exhausted from being constantly on your guard. You may feel like you can’t get up after the most recent crushing defeat. A crutch may have gone long past helping and is now is a problem in itself. Seek out help so that you can rest and recuperate, ready to fight another day.

Affirmation
I can do this!

Keywords and Phrases
Upright – Don’t give up; We shall overcome; drawing on your last reserves; expect the worst, hope for the best; forewarned is forearmed; failure isn’t an option; resilience, strength, determination, stamina, perseverance, defensiveness,  it’s always darkest before dawn; against all odds; the final test; expecting trouble; holding your own; gathering your reserves; no rest for the wicked.

Reversed – Giving up the ghost, surrender, feeling too hurt to carry on; paranoia, adversity, obstacles appear insurmountable; being afraid to make your move; relying on a crutch; once bitten, twice shy; choose your battles; battle weary; shell-shocked; yellow-bellied.

Image – Nine of Wands from the Rider Waite Deck