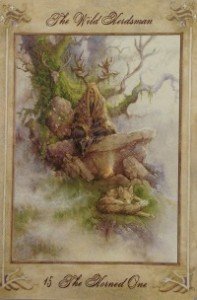 Q. Do you have more than one deck that you use and if so do you have a favourite? If not, why do you like the deck you have chosen?

My collection is way smaller than I would like it to be! There are a few decks that I have given away over the years which now I regret doing. I am in the process of re-purchasing those decks.

In the past I also had the Dreampower Tarot.

I am coveting my friend’s Greenwood deck which he doesn’t use!

There is something about this deck that just clicked and it’s a very personal deck. I think because I have worked with it so much, it’s imbued with my aura and thoroughly connected to me. Very occasionally, I use this deck with two close personal friends but only if I feel called to do so. The Legend Arthurian deck is very gentle, very spiritual. It requires me to step into it, work with it. It’s not a quick reading deck. If I require a short, sharp, no nonsense reading for myself, I use the Rider Waite. They don’t mess about and have a ‘tell it like it is’ vibe! If I’m feeling confused or upset or need to gain some clarity, they are my first port of call.

The Mythic Tarot was one of the decks I once gave away. I repurchased it last year and managed to get one with the old design. Some of you may know this deck was redesigned but I have to say I much prefer the original. As an astrologer I feel a real connection with the Mythic as it’s all based on Greek mythology. The astrologer in me was also drawn to the Celestial deck for obvious reasons. I love that this deck depicts the various constellations and weaves in their mythologies.

The Tarot of the Old Path was another deck I once gave away and has now returned to the fold. I still love this pack – especially the Moon card. As a practising Pagan and eclectic witch,  this deck is suited to those who follow the old ways.

I bought the Llewellyn Tarot because I like Anna-Marie Ferguson’s art so much. Strangely, although I do like this deck, it’s the one I work with the least. I think the Devil in this pack is the creepiest depiction out of any Devil card I have seen, even though I have no problem with the Devil card as an archetype. In this deck, it isn’t even called the Devil – he is The Horned One and connects to the old Horned God of the Pagan Path. There is just something very haunting about this particular image. It makes my hair stand on end and I both like and dislike it because of that!

The Gilded Tarot is my newest addition and I love it. I could instantly work with it and I have found its readings to be very accurate. Perhaps it’s my Leo Rising with Jupiter in the first house speaking but I love the richness of colour and the gold shining tone to the cards. They are very different to all my other decks but very much part of the clan.

As well as working with traditional meanings, I also let the cards speak to me. Certain images can suggest certain situations or issues and after a time these meanings ‘stick’. What I  have found fascinating is that once a meaning sticks to a card in one deck, it then translates to all the other decks I have even though the image on a different deck would not necessarily suggest the same thing.

For example – the Nine of Pentacles in the Arthurian Tarot (Stone Nine) shows an ancient stone surrounded with animals in the forest. Over time, this card started to come up to represent pets. Even though none of my other packs have this kind of symbolism on the card, the Nine of Pentacles will still show itself if a pet issue is relevant (and if it’s with the King of Swords, it may mean a trip to the vet or, as once happened – the Querant is a vet!).

Another example is that in the Legend Arthurian pack, the Two of Wands shows two people having a discussion. Even though the Rider Waite shows a very different image, it still comes up to represent ‘a discussion that is face to face’. I have noticed also that card combinations translate through decks as well.

I am curious to know whether others who work with a number of Tarot decks also experience this ‘translation’ of meaning through different packs. I sometimes joke that my cards come alive at night and all talk to each other!