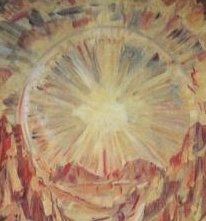 There’s light at the end of the tunnel. Solstice is almost upon us! I cannot wait for the return of the Sun. I’m not a winter child. I love blue skies, flowers and warmth on my skin. In the winter I yearn for light.

But this is a magical time of year. In the Northern hemisphere the Oak King defeats the Holly King and we honour the divine Goddess who gives birth to the young son/sun. Goddesses such as the Norse Frigg who blessed the mistletoe as a plant of love and Frau Holle, goddess of the woodland and evergreen, are ever present in our wintry stories and customs. And of course the stars themselves are remembered in every twinkling fairylight.

With a Full Moon, Uranus turning direct, the Sun’s ingress into Capricorn and Venus turning retrograde, it’s a busy week in the cosmos.

We begin with Mercury quincunx Jupiter on the 16th December. The trouble with these two is that it’s easy to feel pressured into saying yes when you really want to say no. Alternatively, you might be feeling on a high having just got all your Christmas shopping done so agreeing to host a pre-drinks party is just not a problem – until you remember the host of other things you need to do. There may be a tendency to talk to much and forget to listen. Differences in political opinions or moral standpoints could make for some awkward moments. If you’re entertaining guests, it might be easier to follow the usual advice and leave topics like money and religion for another day. But the plus side is that regardless of the odd foot in mouth moment, this little combo is likely to produce a generally optimistic feeling.

The Full Moon in Gemini occurs on the 17th December. As I said in my Full Moon post, this has a stellar vibe as the Full Moon is opposite the Galactic Centre. I’m hearing the Carpenters singing ‘Calling Occupants of Interplanetary Craft’. On the same day, Uranus finally turns direct, amping up the galactic message. I’m reminded of a dream I had years ago where I watched the sky open up and a flood of messages written on tiny pieces of paper fell like rain from the sky. Messages from the cosmos could come thick and fast today but it may be coupled with a sense of anxiety. The trick is to slow down the mental chatter – don’t try to understand it consciously. Let the message speak to your soul.

On the 18th December the Sun moves in to conjunct Psyche so those messages from the day before may give voice to aspects of yourself long since forgotten or dismissed. It’s a day to bring together those parts of your identity that have been cast off through crisis or fear. Getting it together is the focus of the day. By accepting all aspects of your personality, you become a force to be reckoned with – a God or Goddess in your own right.

Jupiter squares Ceres on the 19th December so you might want to avoid an all you can eat buffet for the Christmas do. With these two in a square aspect, diet promises are likely to diminish in equal measure to the waistband increasing. Appetites in general are increased but the hungering for ‘more’ may come from something else entirely – a deeper need buried deep within the body. Check in with yourself if this transit manifests for you.

On a mundane level, as squares indicate a need for action, this could be the perfect time to make a generous donation of food to your local shelter, buy a homeless person dinner or contribute to a charity which works to alleviate hunger.

A conjunction between Saturn and Circe on the 20th December asks you to recognise there is magic in every moment – even in the drudgery of supermarket queues and under the pile of work your boss left you. See through the veil. What we believe is real may not be as real as we think.

The Winter solstice occurs on the 21st December as the Sun moves into Capricorn. This is the perfect time to consider your goals for next year. What tangible results do you want to see? Light a candle and focus your intent. Give thanks for our beautiful star which gives us life.

Venus also turns retrograde on the same day as the Winter Solstice and so begins the first focus on relationships that will be reflected through the coming months with Mars also moving through Libra. A previous warm relationship may turn cold or it may just be that everyone is so caught up with day to day responsibilities it may feel like there’s just not enough love going on! The key is to go for quality over quantity. Treasure the precious time you have with your loved ones.

Venus also represents self-esteem. If your feeling a little flat in this department, Venus retrograde in Capricorn asks you to remember your achievements and/or to look at what it is you want to achieve. Check in to see if you are living your values.

Lastly, finances may also be affected by this transit. Whilst this may be a challenge at Christmas, it may help to simply set some firm limits about what can be spent and what will be saved. This Venus retrograde period is ideal for over-hauling your cash book.

The week ends with trines from both the Moon and the Sun to asteroid Hygeia on the 22nd December putting health in the spotlight once more. If Jupiter inclined you to over-eating whilst square to Ceres, this would be the perfect day to fast or cleanse your body by eating fresh wholsesome foods. Giving the body a rest before entering into the festival feasting might be a good idea anyway 🙂 The emphasis on Hygeia is also a gentle reminder to give thanks for your health if you have it and to treat yourself with loving kindness if your body is sick. Love your body. It is the temple of the soul.

Solstice Blessings to all of you 🙂