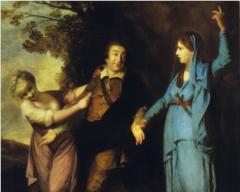 This feisty New Moon kicks off the current t-square in true Aries style with a conjunction to Uranus. The Moon is therefore square to both Jupiter and Pluto. This configuration is all building towards the Cardinal Grand Cross in April. We’re just waiting for Mars now to click into place and then the fireworks will begin.

New Moon in Aries is generally a time of beginnings. In the Northern hemisphere flowers are bursting into life to greet the Spring. Weeds are pushing up between paving stones giving a poke in the eye to ‘civilisation’. “Ha!” says Mother Nature “I’m bigger and stronger than you!”

Aries is first of the fire signs; passionate, impetuous, pioneering. This sign hops from foot to foot, impatient for the off! When the New Moon is in Aries, we have a chance to make a leap, begin a new project. It’s often the time of the year where we find ourselves straining at the bit to make our mark and get to where we want to be.

With the New Moon conjunct Uranus however, this chart shouts ‘wake up call!’. It’s like one of those horrible alarms that pierces your slumber,. The kind of alarm that has you sat bolt upright in bed, body trembling with shock. Boom! This chart is a seething mass of discontent with an unpredictable edge.

There’s a potential for things to reach boiling point. Even though ruler Mars is retrograde, I get the feeling of pressure – like someone wearing stilettos just trod on my foot. Something could make you hopping mad or hopping with excitement.

The problem with Aries is that this sign doesn’t like to be cornered. With Uranus in the mix, it’s like trapping a wild animal in a small space – never a good idea. Those teeth and claws may come out fighting. But of course, sometimes it’s necessary to come out fighting (metaphorically speaking). Especially if your normal rule of thumb is to hesitate. Sometimes you don’t know what you are capable of until you are pushed.

Uranus is inclined to giving flashes of inspiration just as much as shocks. But these brilliant ideas can’t be actioned until you’ve eliminated old beliefs that are holding you back. With the Moon square to both Jupiter and Pluto, you may feel under pressure. It’s pressure to perform, pressure to act, pressure to conform to the ideologies of the outside world. And maybe you just don’t want to. Maybe you just want to do your own thing – and that’s fine if you’re prepared for the flack. The obsessive urge of Pluto and the drive to explore bigger horizons with Jupiter may give you the courage you need to do what needs to be done. However you may need to weed out the things that are smothering new growth first in order to move forwards and meet the requirements of what is being demanded of you. I know many people are feeling overwhelmed with what is being asked of them both at home and at work. This Moon is about pushing yourself as hard as you can – but not to breaking point. It’s about knowing where the line is and asserting yourself effectively if you’re about to enter the red zone.

The caution with this New Moon is to choose your battles carefully. With the upcoming Cardinal Grand Cross, there are going to be some serious challenges ahead. Sometimes it’s just not worth your time and effort to bother with the smaller skirmishes. Sometimes you have to save you energies for the next battle. Part of the lesson of Aries is to know when to fight and when to back off. Sometimes you have to tame that wild energy to make it work for you, not against you. Mars retrograde in Libra challenges you to stay aware and centred.

An interesting story here is that the New Moon is conjunct asteroid Thalia, the Muse of Comedy. The cosmos is reminding you to keep your sense of humour, especially if things don’t go your way. Aries is by its nature a sore loser. Sometimes the best thing you can do to is laugh.

The New Moon sits on the Sabian symbol : –

This is a powerful symbol considering the current astrological revolutionary climate. But it’s important to note that in this image, it’s not about throwing out the old ways. It’s about re interpreting. It’s about looking at your current situation from a different perspective – very much a Uranian call. Once you reframe what is happening, maybe then you really can laugh at the absurdity of it all and turn tragedy into comedy.

Painting – ‘Garrick Between Tragedy and Comedy’ by Joshua Reynolds