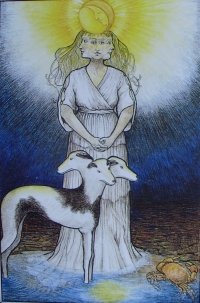 Hekate was officially discovered by J.C. Watson on July 11th 1868. Her number is 100 as she was the 100th asteroid discovered. Orbiting in the outer main asteroid belt between Mars and Jupiter, she is located in the same region as the Hygeia asteroid family but her composition suggests she’s an ‘interloper’. Her orbit is around 5.43 years.

Hekate is one of the great Goddesses of Greek mythology but with a history that stretches back into antiquity. Typically portrayed in triplicate, in Rome she was known as Trivia. Tri-Via literally means three roads and relates to the magical place where three roads meet. Note that how over time, the name of the Goddess has been corrupted to mean “insignificant, trifling”! The tearing down of the Divine Feminine even extended into language.

Hekate was born of Perses ( the destroyer) and Asteria (starry one) Goddess of the night. Her name in Egyptian meant ‘magical speech’. An only child, Hekate was revered amongst humankind and Gods alike. She was even doted upon by Zeus. In the myths it’s said that she bestowed great gifts upon those who prayed to her and made her offerings. With such love shown to her, she was given dominion over earth, sea and sky and also become a Goddess who watched over childbirth in her Mother aspect, as well as a guide for souls of the dead.

Hekate rules over those places and times that are between. Midnight and twilight, doorways, crossroads and stairways, birth and death. Hekate is there in the place of no place and time of no time. Hekate’s magic is drawn from the moment between breaths and between heartbeats. I sense a stillness emanating from her. Although honoured at the dark Moon, it is Hekate who taught witches to ‘draw down the Moon’. Her three faces are the Maid, Mother and Crone, three aspects of a single Goddess. She is skilled in all magical arts and spellcraft.

Whilst Hekate rules the dark of night, she is also the torch bearer. It was Hekate who aided Demeter in her search for Persephone. Described here as ‘tender hearted’ in the myths, Hekate heard the cries of Demeter and went to her aid. Consequently she became a friend and companion of Persephone, accompanying her in the dark of Hades. It is probably from her association with the Underworld that Hekate become a hellish figure.

Hekate is depicted with black dogs in many of her tales. To this day, the baying of dogs still appears in English folklore as a omen of death. Modern science has in a way verified this as studies show that dogs can smell cancer long before medical diagnosis. Some link Hekate to the three-headed dog Cerberus who guards the gates of Hades, perhaps due to her service to Persephone.

As a power animal, dogs are about loyalty. But perhaps too there is something here about how Hekate has tamed the wild instinctual magic of wolves. I feel as though there is something here about the ability to control the forces of the nature – natural magic. The Dog Star Sirius is also connected to Hekate. As the brightest star in the sky, this association harks back to when Hekate was revered instead of reviled.

Hekate guards the veil between the living and the dead. Originally she lead the souls of the dead to the upper worlds. As Goddess mythology was demonised over time, her story was corrupted to mean that at night she raised the souls of the dead – no doubt to do some witchy mischief!. But in her true guise as Queen of the Dead, Hekate reminds us that there is life beyond life and that there is no life without death. She is midwife to the soul.

Over time, Hekate’s attributes were degraded further. In her aspect as Virgin Goddess Artemis, she loved to hunt but turned her arrows on humans when she couldn’t find any game. By Ovid’s Metamorphosis, Hekate had been changed into a cruel and vicious goddess capable of killing her own father with her evil potion.

The Discovery Chart
In researching the discovery chart of Hekate, I found a fascinating fact that I couldn’t ignore. It gave me goose bumps. In Nasa’s small body database, there’s a tiny note that mentions that Hekate’s discovery was actually announced first by astronomer C. Wolf. How could I ignore that! His discovery was made independently of J.C. Watson. As Watson had an earlier discovery date, he got the scoop even though Wolf had announced it first.

I’d already cast the chart for Watson but felt compelled by Wolf’s name to draw up a second chart.

Low and behold, this put the Moon in Cancer, giving 5 planets in the Mother of all signs for the Mother of Witches as well as Mother of Souls. Significantly, it was close to New Moon, the lunar phase most associated with Hekate.

There is a grand trine between Saturn, Chiron and the Sun. Perhaps Hekate’s light helps us to accept responsibility for healing our wounds. Saturn retrograde on the anaretic degree in Scorpio makes me think of how, just when we think we see the light, we must step back into the dark. Its about mastering the darkness within. Darkness sharpens the senses. With Hekate herself in Aquarius retrograde, there’s a sense that she sees things from a very different perspective. Note Chiron on the Aries point – driving home the message that Hekate’s prime function is that of healing.

Jupiter conjunct Neptune is a very loving and soft aspect – given to great compassion as reflected in the story of Hekate and Demeter. In Aries though, this is active compassion. Hekate is motivated to help. Jupiter sextile to Mars reiterates this.

The squares between Neptune and Venus, Mercury, Uranus and the Moon are expressive of the confusion that can accompany times of transition. Mercury square Neptune specifically can be about feeling lost and also a danger of lying to oneself. Perhaps the contacts between the Moon, Uranus and Neptune show that when mishandled or misunderstood, this is the kind of energy that can lead to lunacy. Times of transition can be frightening and disorientating.

In the Wolf chart, Hekate was at 14AQU21 Retrograde, putting her on the Sabian symbol Two Lovebirds Sitting On A Fence And Singing Happily. It’s almost as if the Wolf chart shows the gentle side to Hekate – a Goddess who loves humanity. Perhaps too, this symbol represents the idea that when we bring together the light and dark within, we feel in tune – the soul sings. 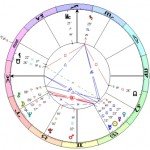 With only a few days difference, the Watson chart is similar. There is still a Cancer stellium but here the Moon is close to Jupiter and Neptune, perhaps alluding to the affection that Zeus had for Hekate and the spiritual education that Hekate offers us. Once again, she shows us how to expand our awareness.

In this chart, Hekate is on the Sabian A Big Businessman At His Desk which seems odd compared to the other. But perhaps here Hekate is emphasising the power of control.

What catches my eye in this chart though is that Black Moon Lilith is widely conjunct the South Node. Perhaps this shows the loss of the instinctual self that we have suffered in society. Maybe too, it’s a call to remember our own magic rather than casting it out. Part of the story here could also be about releasing our perception that ‘dark’ equates to ‘evil’. It could also relate to a need to incorporate the best qualities of Lilith in order to follow the path of the heart – indicated by the Leo North Node. Lilith is wild and instinctual. Maybe too there is something here about taming these instincts to give us the courage of the lion.

In both charts, Saturn is square to the Nodal Axis suggesting a missed step on the evolutionary path. In one way this could show how important it is to master our fears of the dark. In another way, this perhaps represents how patriarchy demonised Hekate – almost like a fault line in our evolution as a species. The loss of the divine feminine has made us fearful of darkness, sexuality and death and this has put up barriers inside ourselves and between each other. Hekate in Aquarius and the Cancer stellium is a reminder that she is a Mother to all of us and her wisdom is for the benefit of all.

Hekate in Astrology
In the psyche, Hekate represents the boundaries between the known and unknown. With her torches she throws light on our own shadows and awakens our own demons so we can see them clearly. I find myself singing Nick Drake’s song ‘Black Eyed Dog’ as I write. Perhaps Hekate’s black dogs are reminiscent of the black dog of depression that tends to overcome us when we don’t know what to do, when we can’t make a choice, when we cower in the face of our own demons, when we are ‘dogged’ by problems, Hekate holds the key. Through her guidance we can unlock our own magic. She is the light in the dark. Like the snake or serpent that’s also attributed to her, Hekate has ancient knowledge.

As Goddess of the Crossroads and between places, Hekate in astrology is connected to our own times of transition. Hekate can help us to see our true choices. She reveals what was once hidden and perhaps what we were afraid to see. Hekate won’t let us stay in the dark for long. She is there when the door behind us has closed and the door ahead of us has yet to open. She is the boundary between what was, what is and what is yet to come. She is death and rebirth. Hekate is the seer, the fortune teller, the diviner who whispers the truth in your ear that your soul hears. With her kinship to the Moon, perhaps she also represents the madness that ensues when we try to ignore our instinctual and emotional responses.

An ancient symbol ‘Hekate’s Wheel’ shows three serpent type creates woven around a centre of fire. Through self-knowledge and inner wisdom, we are lead back to our own light. Hekate teaches us that the true magic lies within.

Image from The Mythic Deck

More about Asteroid Hekate in Astrology

Asteroid Hekate by Marina Macario
Hekate in the Natal Chart: A Little Background + An Example by Julie Demboski
Hekate and Astrology: Standing at the Crossroads by Isabelle Ghaneh – Llewellyn Journal
Asteroid File: Seasons of the Witch by Alex Miller – DayKeeper Journal


If you would like to know more about Hekate in your own chart, I offer readings here