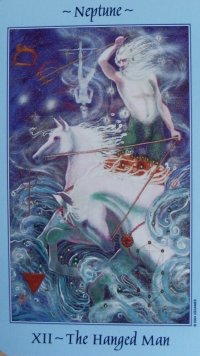 Considering the furore that’s going on about the Cardinal Grand Cross, I thought it might be time to talk a bit more about ‘bad transits’. I addressed this before in a past post but as I’m being attacked from all sides, I thought it would be appropriate.

When I say attacked, I mean Mars. Specifically retrograde Mars and transiting Saturn opposite natal Mars – and a healthy smack of Uranus about to conjunct the Midheaven. As retrograde Mars in my 3rd house kicked out of gear with an opposition to Mercury in the 9th house, my internet up and died. Well, what actually happened was this…

I’m being taught something about surrender. I’m getting the Four of Swords and the Hanged Man in the Tarot over and over – and sometimes the Devil. Surrender to the process whispers transiting Neptune trine to Juno (exact as I write). This is about looking at your commitments. Mars is now conjunct my South Node. Release it to the wind! Mars wants me to re-engage with my true motivations. Saturn just wants me to do the work. And I’m fighting it every step of the way because I’ve always fought to survive. It’s my natal Mars in Taurus in the 10th house.

But the universe wants me to stop fighting and listen. It wants me to stop, to slow down, to sort my thoughts out. And Saturn opposite natal Mars is a no-brainer anyway. I won’t win that battle!

During this time I had a conversation about losing and finding faith. It made me think about my own faith. Jupiter is transiting in my 12th house.

“Do you really believe in where you’re going?” Jupiter asks as he too squares my Midheaven.

I do, but sometimes Saturn makes me doubt. Fear gets in the way and anxiety kicks in. My throat is sore from inner screaming with frustration with endless internet disconnections. I’m not used to things working slowly – Aries stellium you see. Transiting Pluto square the Midheaven is about control. If I can’t control it (Pluto) it makes me anxious (Uranus). Pluto says that has to stop. Do something different. Change your reactions.

How do you work with ‘bad transits’? My solution is to do something that expresses the best of a challenging square or a dicey opposition.

So with Mars I am taking time to think about my goals rather than falling from day to day hoping for the best (my usual tactic!) and working myself into the ground without getting clear of where it is leading. I’m working on controlling inner frustration and speaking nicely to the customer services people at my ISP instead of spitting swear words which are in my head. I’m actively practising letting go of the anger.

I’m taking a more disciplined approach to my work to please Saturn, sometimes timing myself in hourly blocks so that my mind doesn’t wander and start fretting.

To sooth Uranus, I’m reading lots of astrology, studying. listening to podcasts, writing my book (transiting Uranus in the 9th) and of course email readings.

It doesn’t take much to please Jupiter but I’m endeavouring to have faith, to trust that everything happens for a reason. I believe that. I live by that. But sometimes it’s tested to the max.

Oh and I forgot that Pluto is coming up to square Venus and my Midheaven from the 6th house so I’m fasting.

It’s about engaging in a dialogue with these archetypal energies instead of shouting at them or trying to ignore them. Neither of those tactics work by the way, I have tried.

I notice the little things that happen that may seem inconsequential to others. Important conversations that come out of nowhere. Feedback on readings that confirms my thoughts and re-inspires me over and over again. The direction of a bird in flight. Sometimes I hear music. I’m finding time to write. Often I am reminded to let go of my ego which says things ‘should’ be like this. Because when the ego steps aside, the soul can guide me.

I dreamed I was at the edge of the universe in a tiny spaceship in a place and time that was beyond everything else. There were no stars. The end of the universe was a membrane between blackness and blackness. I  re-engaged my ship and jumped back to our solar system, jumping back like Mars. Suddenly I was on Earth wondering why someone had put false stars in the sky and didn’t use the real ones. The Great Bear looked like a tacky store display! It turns out, I was still in the wrong time on Earth – far in the future when all the stars had moved away and so the world governments had hung pretend stars in the sky to make people feel comforted and not alone. But it wasn’t the truth. False comforts don’t work. Saturn requires that I am present in the here and now, never mind what Uranus is doing up there. Because being present takes effort and self-discipline. It’s the grown up response. It’s what will makes me stronger in the end.

When I woke, it was still night and I looked out at the real stars. My dream brought me back here, to the right time, the right world and the true comfort of stars shining.

I told one of my clients recently, use the planetary energy to its best, surrender to the rest. So that’s what I’m doing, surrendering instead of fighting. Because through surrender, there’s enlightenment – eventually.