Q. What card do you pull the most often? Why do you think that is the case?

Overall, I think the card I pull the most often is the Seven of Cups but I also have phases where certain cards repeat again and again. Recently it’s been the Fool which I talked about in this post Words with the Fool – A Meditation.

The Seven of Cups is a fascinating card but one that can also drive me batty. That’s exactly why it keeps showing up in my own readings. It’s still something I must resolve. I am gifted with a very strong imagination. I have lots of creative ideas, some I act on, some I don’t. I’ve always got at least three of four projects on the go and I’m inclined to talk about more if my patient friends care to listen. As an example, right now I’m :-

And somewhere around all of this I’d love to finish my album (I’m a musician/singer) and I’m learning Portuguese..

Actually yes it makes my head ache looking at that list and I’ve probably forgotten several projects unless I look at my Trello board which keeps my life in some semblance of order.

But this glorious imagination sometimes means that I don’t actually do the physical work to bring it into manifestation, mostly because I get stuck trying to choose which project to continue with next! The Seven of Cups comes up in my readings to remind me to get my head out of the clouds and actually just pick one darn project and start work on it!

The danger of the Seven of Cups is living in your head. It’s all a fantasy and that may seem a lot safer than the reality. In my fantasy life I can dream of every project being wildly successful – or a horrible failure depending on my mood!. It is a safe place to succeed or fail because it isn’t real. But these imaginings can become a dangerous illusion of reality and can eventually effect reality, just like the magic in the card suggests (Rider Waite). The shadowy magician like figure may have a trick up his sleeve. The harshest manifestation of the Seven of Cups is a life unlived. Escapism, fantasising and agonising over options becomes a way of avoiding reality. And yes, I experience that too. 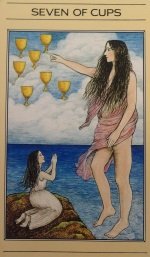 The Seven of Cups can indicate an over-active imagination depending on the surrounding cards and also an abundance of ideas – none of which have any value until they are brought down to earth. I particularly like the Mythic deck’s depiction of the Seven of Cups. I love how the girl is praying to her Muse for inspiration. She doesn’t even seem to notice that the Muse herself has already pointed out the correct cup to choose. There is a certain creative anxiety in the Seven of Cups  – spoilt for choice is the key phrase in many ways!

The key to resolving the problem of the Seven of Cups is grounding. Everything is so up in the air. In order to make a considered choice, there’s a need to reconnect to the earth in order to know which option you most want to make manifest. Sometimes, I just remember that I am indeed blessed to have so many choices.