Home Retrogrades Mercury Retrograde – June 2014 – As You Were

So, just as we are at the tail end of a beast of a retrograde period from Mars, now Mercury is up to tricks! I’m noticing it already. As Mercury entered the shadow zone, a call I was on disconnected for no reason – and just as we were talking about Mercury retrograde! Well, he is the cosmic joker after all…

We get all kinds of warnings around retrograde periods but in truth, life can’t be put on hold just because Mercury is moon-walking. But it is wise to pay heed to when the retrograde period is active and take some precautionary measures – check and re-check details and arrangements, charge up your phone and laptop, check your car battery, start out earlier for meetings and travel and generally think before you speak (or text) as it’s easy to get wires crossed under this influence.

Mercury is the go-between God. He zips through the sky with his winged helmet and sandals, delivering messages between the Gods and humankind. Even Hades isn’t beyond his remit. Mercury connects light and dark, conscious and unconscious, known and unknown. He is knowledge. It’s Mercury who carries our dreams from sleep to waking.

It isn’t enough though to simply collect information. We need to understand – to see both the big and little picture. For many of us, life is so busy that we get lost in the little picture. The purpose of the retrograde period is to zoom out, get a different perspective. Paradoxically we do this by going within. Instead of an outer journey, the retrograde period becomes an inner journey where we contemplate, reflect and review in order to ensure that all the pieces fit together into a comprehensible whole.

Erin Sullivan compares the Mercury cycle to two brothers – Epimetheus (afterthought) and Prometheus (forethought). Prometheus knew it wasn’t a good idea for Epimetheus to marry Pandora. But Epimetheus went ahead with it anyway. So the tale goes that as Mercury (Hermes) escorted Pandora down to Earth, he whispered in her ear, giving her insatiable curiosity which of course meant she could not resist the urge to open that little box…

And we all know what happened next.

By that time Epimetheus was probably seriously reflecting upon his decision to marry Pandora in the first place. As I said – afterthought.

Mercury begins its retrograde period during the Epimetheus phase so we tend to be besieged by (Pandora’s) demons and devils mostly between the station retrograde and the point in the cycle where Mercury conjuncts the Sun (the inferior conjunction). The conjunction between the Sun and Mercury marks the beginning of the Prometheus phase. Just as Prometheus stole fire from the Gods, the conjunction can trigger a moment of enlightenment – an idea that sparks another and another. The trick though is to hold that thought, to allow time for the flame to stabilise before heading to tell everyone about it.

Mercury entered the shadow zone on the 23rd May so he’s gradually slowing down. As I write, my Gemini friend is on her way up to see me but has been delayed due to hideous weather! The slow down has begun in earnest.

On the 26th May, Mercury trines the North Node. This aspect may trigger thoughts regarding why am I here? What is it that I came here to do? This aspect will repeat twice more during the retrograde cycle so part of the plan is to put you in touch with your karmic path. Have a think about it.

Mercury creates a sextile to Venus on the 28th May prompting a little smooth talking. Even though Mercury is slowing down, there’s an opportunity to make an impression.

Mercury enters Cancer on the 29th May making you more thoughtful and considerate. There’s less of an impulse to blurt out whatever it was you were thinking in favour of making a real emotional connection. Less is more whilst Mercury is in Cancer. Your thoughts are becoming more reflective and perhaps turning to matters of home and family. 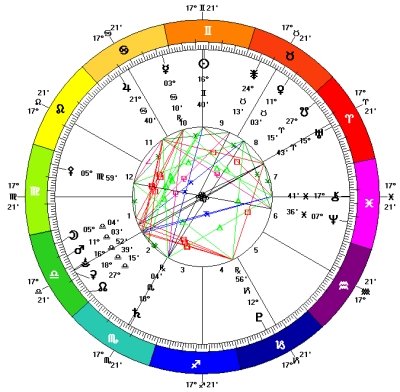 The retrograde chart feels edgy. I look at it and think, I don’t know whether I’m coming or going. Mercury is in a stressy sesquiquadrate to Saturn so there could be a tendency to try to force the issue, even when it isn’t getting you anywhere. There’s a square between a moody Moon and Mercury too, along with a square between Mercury and Mars which just makes it that bit grumpier! The closest aspect in the chart is a quincunx between Venus and Mars so Venus is suggesting that the way through is subtle art of diplomacy along with keeping your courage in the face of adversity. But she’s also opposite Saturn so partly her advice might fall on deaf ears. Either that or with the trine between Mercury and Neptune, it’s glossing it over with a large paintbrush, pretending it all isn’t happening…that or running home crying to Mummy.

So that’s the difficult stuff out of the way, let’s look at what’s hidden underneath. The Mercury trine to Neptune suggests engage your imagination. Use this Mercury retrograde period to nurture your creativity. Yes emotions may start off running a little high but by tuning in to your feelings, you start to intuitively find your way. Cancer as a sign is often emotionally invested in the past. If you’ve been feeling stuck, perhaps listening to some old tunes will help you to re-connect as well as reminding you of how far you’ve come. There’s a little nostalgia here and that’s ok. Be a peace with your history.

A Cat Arguing With A Mouse

In my mind I’m thinking of Tom and Jerry cartoons where Jerry always gets one up on the cat! There’s something here about the roles we play, the conditioning we experience as we grow up as children. Maybe you feel as though you have to explain, justify or excuse yourself for being who you are. At the end of the day, cats are the hunters, mice are the prey. Each have a role to play in the animal kingdom. It doesn’t make one supreme to the other – just different roles. And this is like us, we too have different roles to play in society. Let go of justifying the role you play – but ensure that it isn’t just conditioning that has cast you in the role in the first place!

Maybe we can take this symbol literally as well, especially with an irritated Moon conjunct Mars in the retrograde chart, both square to Mercury itself. If you are feeling like you are playing cat and mouse with someone, perhaps it’s time to speak up – but gather your thoughts first.

Mercury re-enters Gemini on the 17th June so thoughts may feel scattered with the sudden change of pace. Distraction is likely. Maybe you feel you need to know what everyone else thinks and have an urge to talk to your friends. Focus on that inward journey first. Check in with your thought processes. Trust your thinking.

The inferior conjunction between Mercury and the Sun occurs on the 19th June. The Sabian symbol is The First Mockingbird Of Spring. This Sabian seems to re-iterate ‘trust your thinking’! With the blazing inspiration of the Sun, this is about finding your voice, your opinion, your perspective, your ideas. But it’s also about being aware that we don’t live in a vacuum. Someone, somewhere has probably thought this before. It’s about taking what you know and then improving upon it. If you find yourself mimicking what you’ve already heard, consider whether you are afraid to let your own thoughts through. Are you mocking or ridiculing yourself? Stop! This is just the beginning. No one expects you to know it all now.

Another trine to the North Node occurs on the 24th June once again aligning you with your life purpose. Now that you’ve had a little time to review everything, where does this leave you? Do you feel more certain or less? Either is OK. Knowledge is power.

Mercury stations direct on the 1st July on the Sabian symbol :-

Perhaps then, there’s something here about cutting away dead wood. Getting rid of old assumptions about who you are and what you think. This retrograde period may be important for examining your history, your family, your roots and comparing it to what you really think now. By getting rid of opinions and beliefs that overshadow your own, you let the light in, making space for your own growth.

The final trine to the North Node occurs on the 4th July. By this time, now that Mercury is moving forwards again, you are likely to feel a lot more consciously aware of the material that arose during the retrograde period and what this means for your spiritual development.

The retrograde cycle completes on the 16th July as Mercury exits the shadow zone, just in time for Mars to do the same on the 21st July. Finally, the road ahead is free and clear! On this date, look back to the beginning of this cycle. Where were you then? Where are you now? What did you discover along the way?

Thoughts for this Mercury Retrograde
Explore your past, examine your history, discover your roots. What is nature? What is nurture? Where do your thoughts come from? Who or what shapes your thoughts? Who or what are you playing cat and mouse with? What parts of yourself are arguing? Where do you find yourself justifying, explaining or excusing yourself? How can you get clearer? What do you need to cut away? Where do you need to speak up? Where are you afraid to speak up?