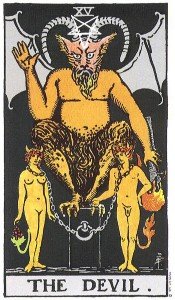 I was having a mare of a day the other day. I couldn’t decide what to do. I felt tired, irritable and my mood was turning darker by the minute. I was trying to write and my mind was blank. I even just typed ‘black’ by mistake! I’d write a few sentences, delete, start over, berate my stupidity, my non-existent ideas, try again, stop, repeat.

I looked back at my morning reading. Ah yes, the Devil!

The Devil card in the Tarot is many things, more than I can possibly address in a single post but he enjoys encore after encore whenever I get ‘stuck’ like this. He’s there when my mind goes quietly nuts, when I’ve been dangerously low, when my fears have become so all encompassing I’m practically frozen with fear. And he’s there as I tip from fear to anger to rage, a boiling white hot rage that consumes me from the inside out leaving me exhausted, fretful and still unable to write a solitary word.

My mind is a live wire, doubt a monkey on my back.

So I took out the Devil card and looked, really looked into his eyes and asked him what the hell he was playing at. Tripped out of the necessity to write, my mind sat up and paid attention instead of trying to eat itself. Oh, well would you look at that, said my inner voice. Look at the mark of Saturn on the Devil’s raised right hand. For the astrologers amongst you, Saturn is nearing the second hit of an opposition to my natal Mars. Saturn and Mars are traditionally known as the malefic planets in astrology. It’s a transit known to trigger huge frustration. Mars rules the area of my chart connected to writing (the 9th house). The Devil was sternly reminding me of this transit – reminding me not to get caught up in the rage of Mars and get down to business (Saturn).

In the Tarot, the Devil card relates to Capricorn (ruled by Saturn). This sign is driven to succeed. Capricorn has a castle or company to build. Ambitious and determined, they don’t stop ’til they get to the top. Saturn is about ‘mastery’ but in the Devil card it’s twisted into master and slave.

One of the themes of the Devil card is materialism. The torch in his left hand points downwards. There is only this and nothing more he seems to say. The blackness envelops him. We can’t see anything else when we are ‘in hell’. The man and woman chained to the Devil don’t really look that worried. It’s as though they know nothing else.

But the chains aren’t tight. They could lift them over their heads if they wanted to. Why don’t they? Is it because they have become conditioned to accept their fate? Are they too afraid to leave? Or is it because they think there’s nothing out there?

I suddenly found myself thinking about dreams and how monsters in dreams are often unnamed fears, rather like the monsters children are afraid of who live under the bed. Sometimes the Devil card can feel overwhelming – a big black ‘halt’ sign that puts the fear of God into you!

So I decided to go deeper. To take apart the Devil and name (and shame)some of those fears behind it. I found myself drawn to the chains; wondering why I was willingly allowing myself to continue to be a slave to these negative thoughts.

I created an unchaining spread laid out in the pattern of the inverted pentagram. The point of the pentagram touches the 3rd eye of the Devil. It made me think, the Devil knows, even if I don’t. In other words, my fears know what the truth is. The truth is hiding behind them.

So here is the spread :-

Note that I left the Devil out of the deck as I shuffled, using him as a significator card to focus on. 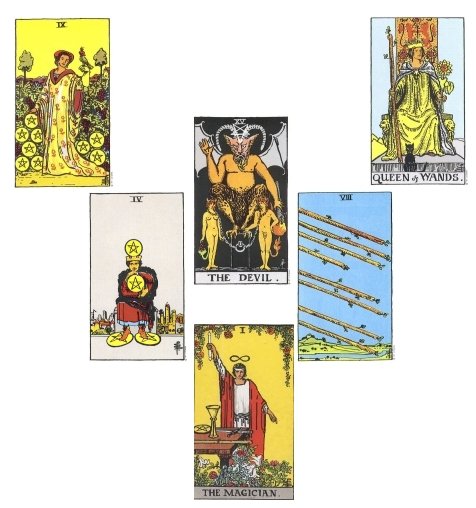 I found myself caught up in the falcon, the symbol representing this character’s self-control and spiritual mastery. I began to think about the hunted and the hunter. I want to be the hunter not the prey. If I don’t succeed, I fail. There’s no in between. I’m chained to my idea of success and what that looks like. Black and white thinking. The Nine of Pentacles also tells me that I am chained to being independent and self sufficient. I don’t ask for help! I feel like I must be on top of my game All. The. Time. I want to do everything alone. I’m also chained to wanting to accomplish everything…which is rather a lot… all at once.

2. What is keeping me chained?

The Queen of Wands is another figure suggestive of confidence and control. The Queen is naturally creative, spiritual, intuitive, fiery and full of ideas!

I find myself staring at the staff the Queen holds in her right hand. Ah…I see it. It’s not that I’m short of creative ideas to write about, in fact, I probably have an abundance of them. But I’ve got caught up in wanting the ‘big’ idea. The game changer – the one no one else has done.

The black cat stares at me from the bottom of the card. Really? She seems to say. Does it have to be a big idea for it to be a good idea? I see the lions behind her. Ouch, yes my pride is smarting. The reason I’m searching for something bigger, better and bolder is because deep down I don’t want to lose face. I’m Leo Rising. This little black cat doesn’t know if she can really make it amongst the lions and that’s hard to admit, you know – because I’m Leo Rising. I’m supposed to show the world that I’m a confident kitty. When in fact, I’m a scaredy cat.

What’s keeping me chained? Focusing on ‘the big idea’, feeling like I can’t live up to my own expectations, fearing the loss of face if I fail. A big old crisis of confidence.

3. What do I need to know in order the remove the chains?

Arrgh stop being so safe! The Four of Pentacles is holding on so tightly he can’t move an inch. It’s like me, holding on to my ideas. I’m thinking of them as ‘money spinners’ and then because of the crisis of confidence in the Queen of Wands, I think to myself ‘no one will buy this book’. I’m too afraid to let the words flow. Too scared to try something different. Better to be safe than sorry, this character hisses. In fact, if I let go of holding back, if I stop worrying about whether this idea will ‘sell’, it frees me up to be a dare Devil.

4. What will I see once the chains are removed?

Oh here we go! Ideas are flowing. The blue sky is clear, like my mind. If I can let go, if I can stop worrying about ‘the big idea’ and just allow all the ideas to have a say then I can get excited about what I’m doing again. In that excitement is inspiration. The Eight of Wands relates to the 9th house in astrology. Once the chains are gone, I’ll see that there is a whole world of possibilities. There’s a wealth of opportunity in this card. Not everything will hit the mark but there’s movement and a strong sense of direction.

5. What is my next move or how to outwit the Devil

Aha! Look at how the Devil mimics the Magician. The Devil is number 15 in the Tarot. The Magician, the number 1. So in many ways, the Magician is one face of the Devil (or vice versa). The Magician tells me, all I need to do is recognise I have everything on the table. I have the tools I need. Now it’s about mastering the mind, instead of being a slave to it. My next move is to simply focus on the task at hand. Let the magic happen. I can’t allow myelf to be distracted. Now that I am conscious, now that I have named and shamed my demons, my awareness is centred, poised and ready for action.

The Magician is ruled by Mercury. Devil spelt backwards is LIVED. The Magician reminds me that I will live to tell the tale. I can outwit the Devil simply by acknowledging he no longer has any power over me. I hold the magic wand.

The Devil wears many faces. He is all our monsters, all our fears. But the Devil is also more than this. He is Lucifer, Light Bringer, the Morning Star. There’s much more to say but that will be for another day. In the meantime, I hope you like the spread. If you try it out, do share your experience in the comments below.

Images from the Rider Waite Deck