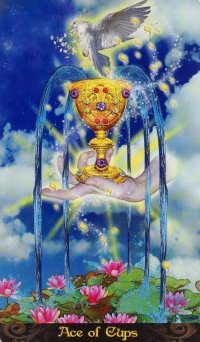 The very first time I saw one of these cards posted on Facebook, it caught my attention. I made a note of the name of the deck and planned to look it up. It languished on my ‘to do’ list until a couple of weeks later I was having a reading with a friend who told me that she was conducting my reading with this deck. Within an hour of the reading finishing, the deck was purchased and winging its way home.

The first thing I noticed upon opening the deck is just how beautifully it’s produced. The exquisite attention to detail present in the cards themselves has followed through into the production and packaging. The box is solid and side-opening. Magnets are used on the side flap to keep the box closed. The High Priestess gazes out from the centre of the cover and the box is gilded, sparkling. It’s so inviting, magical, mysterious.

Inside the box there are the cards themselves – not too big, not too small. The sides are gilded too and the card stock is a lot thicker than many other decks. In fact, when I was first looking through the cards, every now and then I thought that maybe two were stuck together because I was unused to this card thickness. The cards are borderless aside from the label at the bottom of each which somehow makes them see all-encompassing. In the past, I haven’t often paid a lot of attention to whether cards have borders or not. Working with a borderless deck however, the cards seem more immediate, more striking. There’s nothing between us and them. It’s as though you pick up a card and immediately it speaks to you.

The deck was created by artist Erik C. Dunne. Each picture has been expertly crafted through a mixture of photography, digital manipulation, air brushing, painting. At first glance it looks like digital photography alone but the more you look, the more you see the artistry. Light streams through every image which is fitting as the deck was named to honour the illumination that tarot provides, nothing to do with the Illuminati secret society.

Every card has incredible layers of depth and meaning. Whilst the artist has been sensitive to the traditional card meanings, there is also references drawing on related systems of thought such as astrology and kabbalah. The only exception to tradition is that the Magician has been re-named The Alchemist. Symbolism is rich and vibrant. Each card is a multi-layered meditation. In fact, this deck is very suited to one card readings.

When I first looked at the deck, I noticed that the suits seemed to represent different cultures – Chinese/Japanese, Arabic, Scandinavian and one I couldn’t figure out. It was only when listening to the artist discuss the suits that it was made clear. Wands celebrate Persia, Pentacles – China, Swords – the Elizabethan era and Cups are an unknown Elvin type race. I find the choice of cultures a little strange as I don’t have any connection to them nor can I necessarily see the reasoning (although listening to the artist talk about why certainly helped). I do love the suit of Cups with their fairy type characters but this seems to jar with the more human connections and history of the other suits. I’m unsure whether it works but at the same time, love the deck as a whole as the artist himself pulls it together through his own style.

My only real negative is that occasionally, I find the colours chosen for certain cards jar with my own personal understanding. For example the Eight of Wands is mostly cool blues whereas this is an inherently fiery card. The Empress is dressed in red yet I associate her far more with earthy green. As with any deck, there are cards I like more than others. Cards I have fallen in love with are all four Aces, the Two of Cups, the Hermit, the Wheel of Fortune and Judgement. One card that I just don’t resonate with yet is the Nine of Cups because he seems a little creepy and the King of Cups looks a lot more stern than I would normally expect with this card! But these are personal opinions not criticisms. The deck is too beautiful not to enjoy. 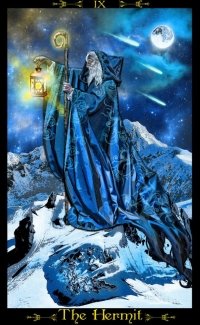 I have quite a few decks now but my ‘go to’ deck is the Rider Waite. Coming to the Illuminati Tarot from that is quite a shock to the system at first. These cards are so dense. I found that when I first laid out a Celtic Cross spread, it was quite overwhelming. It’s the difference between listening to a soloist and then to a choir with accompanying orchestra! It’s the Carmina Burana of decks. I’ve found that I need to be in a certain headspace to use it. It’s particularly suited to deep, meditative readings. There’s so much going on, colour, symbols, light, impressions, that at first it can feel like being bombarded. That is the beauty of these cards however because they don’t allow you to stay on the surface. They invite you to dive into the ocean and explore the depths. You have to be willing to do some deep diving, if only to quieten the noise. It may be necessary to use spreads involving less cards, perhaps 3 – 5 at most so your intuitive senses are not drowned out by such a vast amount of information.

The accompanying book  by Kim Huggens contains full colour images of each card. The Majors are given a whole page each for image. The presence of colour in the handbook is a rarity as most often tarot books simply include black and white images – presumably keeping the production costs down. It feels like no expense has been spared with this deck. Each card speaks a monologue then we are given a small list of keywords and phrases for interpretation. Whilst the book is beautifully written, for those wanting a much deeper analysis as well as longer card dialogues and more, I recommend the expanded version of the book which is sold separately.

This is a gorgeous deck and its no wonder that it has been so richly received by the tarot community nor that it is in high demand. Whether you use it for giving readings to clients, meditation, story telling or therapy it’s a deck that can deliver. Even with a few reservations, I feel as though I could use this deck for years and still find something new in the images every time. It may be too busy for some but if you hear this deck call your name, go for it. You won’t be disappointed.