This lunation brings up the question, what have you learned so far? Ruled by portly Jupiter, Sagittarius is the sign of the eternal student, ever expanding in knowledge and understanding. Sagittarius is mutable fire and this energy translates into an enthusiastic seeker, ready to hot foot it to Morocco, Easter Island, China – anywhere they haven’t been in order to discover something new and wonderful about the world. Something that’ll make them think and an experience that will push them beyond the boundaries of what they already know.

In the Full Moon chart, the lunation ruler Jupiter is bound up with Black Moon Lilith. There’s a haunting feeling that some essential piece of the puzzle is missing. It’s like you know something is there but you can’t see it. You just sense it, a void, a weight pulling you in some direction. You want to know what you don’t know!

Venus and Saturn form an opposition of the day of the Full Moon which takes the shine off enthusiastic Sagittarius. Combined with Lilith, it’s a bit of a black cloud. Venus and Saturn together are all ‘this is the reality, get used to it‘. Jupiter doesn’t like it because something is missing and it all starts to feel rather grumpy. The Full Moon is square to Chiron. It’s like being afraid of travelling in case you fall sick – or being afraid of learning something new which shakes up your world view. A trine to Uranus draws you to investigate despite your fears. The quincunx from the Full Moon to Jupiter shows that some adjustments are needed. If you get into a situation where you don’t understand, don’t let it darken your day. Focus on the silver lining. Bless the situation for teaching you something new. This is your passport to freedom. Keep the big picture in mind and use the Mercury retrograde period to do some homework. 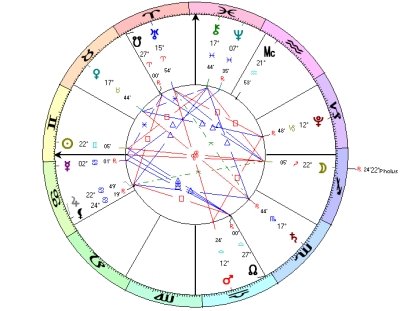 The Full Moon is conjunct asteroid Pholus. One day Heracles came to visit the land of the centaurs. Wanting to be the perfect party host, Pholus popped the cork on an ancient bottle of wine he’d been tasked with keeping. Unfortunately the heady aroma of the wine went straight to the heads of all the other centaurs. They became intoxicated and as often happens, started brawling in their drunken state. Heracles tried to stop it but in the midst of battle, Pholus took a poisoned arrow to his foot and died. It was this same fight that injured Chiron, the wounded healer.

So the Full Moon conjunct Pholus brings up the issue of shooting yourself in the foot. Whilst you may have good intentions, the difficulty with this lunation is that small acts can have big consequences. There may be a tendency to leap in and try to make it all better. Jupiter is the protector normally but he’s off his game with Lilith in the mix. Mars is square to Pluto as well which adds an enormous impulse to just DO something. The trick is to have a little faith that things will work out in their own good time rather than grand gestures, sweeping statements or piling in feet first.

The Full Moon sits on the Sabian symbol :-

On the plus side, this symbol represents the excitement of landing somewhere new. An adventure awaits once all the pesky forms have been filled in. The problem is that if you are not ready, you’re in danger of being sent back to where you came from. Part of this Moon is about being prepared for the adventure ahead. What requirements do you need to fulfil before heading off?

The difficulty with this Sabian is that it brings up feelings of being a stranger in a strange land. To make their way in the new country, the immigrants must learn the language and customs in order to feel at home. This Full Moon may trigger feelings of not being ready, not being acceptable, unable to communicate and feeling like a fish out of water. Do yourself a favour and ensure that the basics are in place before entering unknown territory whether it’s actually moving to a different place or whether it’s a new project or chapter of life. Get the information you need, apply for the qualification, learn the language, lingo or tech speak. You give yourself a much better chance of success by doing the groundwork first. Jumping in feet first may only end up with being sent back to the beginning again. Sagittarius has a tendency to wing it, to rely on lady luck, prayer and bluster to get through. Sometimes it works. This is not one of those times. Make a map to success. Plan your journey. Your guardian angel will thank you for it.