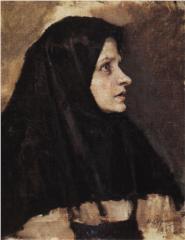 I saw a news item today that shrieked of Black Moon Lilith to me. In fact, I’ve been sensing her strongly recently. Perhaps it’s because she’s in Leo and therefore endlessly ghosting across my Ascendant, back and forth she flies up into my face. Before I even knew of her, I was calling myself Lily on an old website (the nick name of my Grandmother after whom I’m named). Me and Lilith go way back.

Leo puts things in the spotlight, gives it a name and a stage. Suddenly I am seeing her everywhere.

The Woman in Black has captured the imagination of America and the social networks. I find it utterly extraordinary that this quiet woman, seemingly on some pilgrimage of her own has evoked such profound responses. A BBC article begins with “Locals have called her a ghost, others have called her a prophet, but regardless of her true identity, a mysterious woman shrouded in black has left Americans spellbound’.

I often use the keyword ghost’ when defining Lilith and she has a natural connection to magic. Sometimes she is a literal ghostly encounter, more often a wild encounter with ghosts of the past that still haunt us. She is a dark mystery, a herald, the one who holds the power and she doesn’t cave to the demands of any man. Strong, powerful, aloof, Lilith taps in to something beyond the light of creation, still attached like a ghostly umbilical cord to the chaos that came before.

It is the mystery of the Woman in Black that has captured people’s attention as well as her perceived strength. Her utter unwillingness to engage, to explain herself or give way to convention seems to be speaking to people on a profound level.

The phenomena took hold when someone uploaded a video of the Woman in Black onto Youtube. It triggered a viral response. Out of curiosity, I set up a chart for the time and place the video was uploaded. 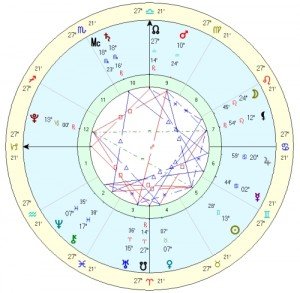 Black Moon Lilith is in Leo, as is transiting asteroid Lilith. Both are in the 7th house. Asteroid Lilith is conjunct the Moon, symbol of ‘the public’ in mundane astrology. The 7th house is the house of close connection along with open enemies. This lady seems to have drawn the attention of both.

This shrouded figure is shown as a public figure. It’s emphasised by the Ascendant ruler Saturn, exactly conjunct the Midheaven. The Woman in Black has come to everyone’s attention. She can’t hide when the Midheaven is involved and with both the MC and Saturn on ‘A Parrot Repeats The Conversation He Has Overheard’, everyone is talking about her. The Sabian symbol of the Ascendant ‘A Large Aviary’ seems to confirm this sense of being a figure who represents something wild and free yet caught up in the cage of the public eye.

I notice the Nodes exactly square the Ascendant-Descendant axis. The North Node is sextile to the Moon and trine to Mercury. The North Node is in the 9th house which I associate with the internet – worldwide communication. The mysterious story needs to be told for reasons perhaps yet we can’t understand and prove to be a strong challenge for the Woman in Black herself.

Black Moon Lilith is sextile the Sun and both are quincunx Pluto which is hidden away in the 12th house. With the Sun taking centre stage in its own natural house, it once again shows the sense of being in the limelight. But this is at odds perhaps to the Woman in Black’s personal journey. Pluto in the 12th is expressive of the spiritual reasons. She steadfastly refuses to speak to the media – keeping her secret which also holds her power.

It’s difficult to speculate and perhaps better not to because it is the mystery itself that speaks to the ghost in each of us. Watching her making her way down the paths of America with her baggage and umbrella, walking with purpose, her faraway eyes firmly fixed on her destination, I feel the tug of the open road in my own heart. Perhaps it is the desire to be wild and free, to leave it all behind. Perhaps it’s the horror of having to – to be so utterly alone in a world where everyone knows your name.

And maybe it’s the hand of Lilith, reaching out and plucking the cord attached to our own inner chaos which lies beyond the spark of creation – reminding us that we too will one day be ghosts, walking these ancient roads towards an unknown destination.

Painting ‘Head of a Woman in Black Shawl’ by Vasily Surikov

Woman in Black – Know Your Meme