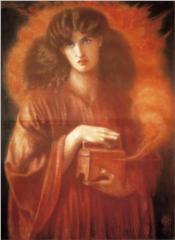 Asteroid Pandora was discovered on the 10th September 1858 by astronomer George Mary Searle. Pandora is one of the larger asteroids, bright and part of the main asteroid belt which orbits between Mars and Jupiter. Her orbital period is around 4.58 years.

Pandora was named by the widow of the founder of the observatory. At the time, the widow was involved in a heated dispute with another astronomer there which eventually resulted in him being physically thrown out by hired men. Upon hearing that the asteroid was named Pandora, the astronomer in question commented on how apt it was. So there at the beginning, Pandora was connected to controversy.

The Myth of Pandora

After Prometheus stole fire from the Gods, Zeus was furious so he charged master craftsman Hephaestus to create a woman (Pandora) to bring great misery to the human race. Misery was the price to pay for fire. Pandora was gifted by various Gods and Goddesses with every attribute a woman (and man!) could desire – beauty, eloquence, talent and more. Zeus gave Hermes the task of taking Pandora down to Earth as a gift to Epimetheus, brother of Prometheus. Prometheus means forethought. Epimetheus means afterthought. Pandora was also given a sealed jar and told not to open it under any circumstances. Mercury, up to his usual tricks, whispered in Pandora’s ear on the way down to Earth, giving her the ‘gift’ of insatiable curiosity along with her many other talents.

Prometheus had the foresight to know that the Gods were angry and had warned his brother not to accept any gifts from Zeus. Epimetheus however was far too blinded by love or lust so went ahead and took in his bride. Pandora could not resist the urge to peak into the jar. Upon lifting the lid, all the ills of the world flew out to plague humankind. Only hope remained in the jar.

As a aside, the ‘box’ that most people are familiar with was actually a mistranslation of the Greek word for ‘jar’ and this was then set in stone with Dante Gabriel Rosetti’s painting. I will use the word ‘box’ from now on as not only are people more familiar with it, it also carries connotations of its own which I think are relevant.

There are several threads here that are interesting to follow. Firstly, there seems to be a relationship here between Pandora as ‘first woman’ with Eve and possibly Lilith too. Certainly we see a continuing story of the divine feminine and woman in general being the ’cause’ of the ills of the world. Even the misinterpretation leading to the word ‘box’ which then also became a slang term for a woman’s vulva seems part and parcel of this story.

Essentially, Pandora was created to resolve a testosterone contest between the boys – men and Gods, all male, all fighting to get one over on each other. Prometheus stole fire. Zeus punished them. Pandora was the pawn in the mix.

Whilst we don’t have a time for the discovery chart itself, the aspects and placements in the chart are quite fascinating. Firstly Pandora herself is in Aries – the first of the fire signs so this falls back on fire, the acquisition of spiritual enlightenment and vision being her genesis. 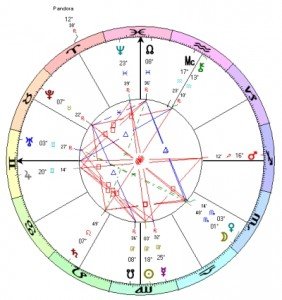 The Sabian symbol of Pandora is An Unexploded Bomb Reveals An Unsuccessful Social Protest. This symbol is in keeping with the original intention of Zeus for Pandora to be a punishment to mankind. Pandora herself is the ‘unexploded bomb’. It’s as though Pandora is charged with unreleased potential. There is a sense of force behind her yet it can be unused, dissipated, defused – or perhaps twisted to a different purpose. There’s a feeling that it is only through exploding the bomb or opening the box that Pandora’s true potential is realised.

Jupiter opposite Pandora’s ruler Mars shows the ‘righteous anger’ of Zeus. The asteroid belt where Pandora resides lies between these two planets. There’s something here about personal action verses social action. There’s a need to be aware of one’s personal desires and the effect that has on the population as a whole. Perhaps Pandora then could be said to be connected to ‘right action’ or social activism. This aspect also relates back to the idea of ‘social protest’ in Pandora’s Sabian symbol.

Mercury opposite Neptune wonderfully captures the role of Hermes whispering into Pandora’s ear. This is the box of delights, truth and lies. It’s Epimetheus making bad decisions through clouded thinking, under the spell of the promise of something wonderful. It’s Pandora utterly enchanted by what might be in the box. With the Sun also opposite Neptune, there is clearly magic at work within Pandora.

Saturn opposite Chiron links in to the ills of the world being released. But there’s something here too about not taking responsibility and putting the blame onto someone else. Pandora was used as a scapegoat.

Uranus is square the Nodes showing a shock to the system which can go either way. Releasing the truth can propel things into revolutionary change or trigger instability – maybe both. It also demonstrates Pandora’s rebellious act of opening the box despite being told not to do it.

The Moon and Venus are opposite Pluto. This carries the theme of women being used to start a war, the fall and domination of woman and the divine feminine. It also captures a sense of Pandora’s irresistible charm as well as her own compulsive desire to open the box. There’s an obsessive edge to Pandora which draws us inevitably to face our demons. The ‘fate’ is inescapable. Once our curiosity has been triggered, it’s insatiable. She is the ultimate femme fatal.

There are several threads worthy of investigation with Pandora but the most prominent manifestation of her energy seems to be related to the typical idea of opening the box and blowing the thing wide open. She seems prominent in the charts of whistleblowers and activists. On a personal level, where she is in close aspect to one of the main planets or points in a chart, she may represent a powerful pull to face your demons, a need to open a can of worms, regardless of consequences. Some part of you senses that beneath the horror lies something far more valuable. Negatively manifested, she can be where you take the blame, where you refuse to listen and where you act first and think later. There is a great deal of energy in this asteroid that can be directed for good or ill.

Things aren’t as they seem; beware of things that seem too good to be true; curiosity killed the cat; opening a can of worms; getting more than you bargained for; whistle-blower; letting the cat out of the bag; causing a stir;  rocking the boat; a set-up; not doing what you’re told; act first, think later; social activism; unexpected consequences; be careful what you wish for; a gift wrapped up in a curse – and vice versa!

Karen Silkwood – Whistle-blower who was (possibly) killed for revealing dangerous working conditions. Pandora is exactly on her Descendant and opposite Chiron which lies on the Ascendant. She became the ultimate scapegoat after opening up about what was really going on. Pandora is also exactly square to Saturn which is conjunct the Midheaven. Interestingly, Meryl Streep who immortalised the story in the movie ‘Silkwood’ has Pandora in the 6th exactly semi-sextile Chiron in the 5th.

Edward Snowden – Famous for revealing excessive government surveillance. Whilst a little wider in orb than I would normally use, I can’t ignore Pandora in the 1st house conjunct the Sun.

Julian Assange – Famous for setting up Wikileaks to expose information the public should know. Pandora is in the 11th house exactly trine the North Node in the 3rd House.

To find Pandora in your chart, enter Asteroid number 55 in the ‘additional objects’ field at astro.com
Alternatively, you can locate the position of Pandora using the ephemeris at Serennu.com

If you are interested in knowing the asteroids that play a part in your story, I offer readings and consultations.