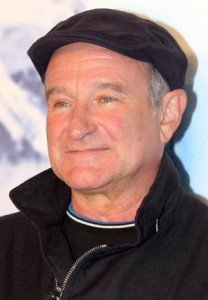 I cried when I heard the news. Robin Williams was one of my favourite actors. Yes there are terrible things going on in the world, yes there are suicides every day. But sometimes, a single person’s crisis just touches you deeply because it reaches into you and lights up your own dark places.

Sometimes life is unfathomable and so unbelievably painful that all you want is for the pain to stop. I’ve been there and done that – three times to be exact. It’s tempting to erase that last sentence and stick with the astrology. Stick with the facts and not appear vulnerable or weak because oh my Gods I’m an astrologer/spiritual guide/tarot reader/writer and I must be perfect. Yes, it’s still my demon too. It’s why I can go to dark places with my clients, if they need to. It’s why I have a passion for helping others.  It’s how I’ve grown in awareness and learned to own my ‘stuff’. It’s why I have spent many years trying to figure myself out, found coping mechanisms and occasionally screamed into the darkness. It’s why sometimes I can step into extraordinary light because I’ve witnessed its opposite. I’m not erasing these lines because it’s part of my experience, and damn it we need to talk about these things. Because it happens too much, too often and so many people are just too afraid to talk about it. People don’t know how to handle it, judge it, get angry about it. There but for the grace of God go I…

I’ve said so many times, there are no secrets. The stuff we hide in the 12th house, these are all our secrets. Shame, fear, inhibition, guilt, regret, jealously, rage. These are all our 8th house Plutonic demons that we try to sink to the bottom of the ocean. And Neptune tells us what we think it ought to be. It whispers garbled secrets, promises of paradise. Neptune offers you a glamour to hide behind, a little spell casting to deflect from the ‘horror’ of the real you. But when the spell fades, there it is – the ocean murky with pain and despair and a terrible feeling that something absolutely essential is missing. 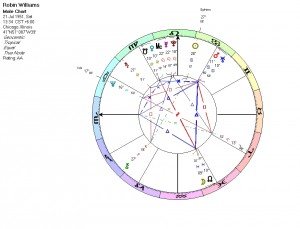 Robin Williams has the North Node in Pisces conjunct the Moon and the South Node in Virgo conjunct Venus. Uniquely sensitive, there is a sense that his emotions were tossed on the great tides of life. From great highs to great lows, he could mirror any character and draw upon a profound love. Neptune powerfully placed in the 12th house echoes this yearning for connection and perhaps a pull to return to the great cosmic womb. Compounding this, Neptune is conjunct Isis – it’s like piecing together the soul. It immediately makes me think of one of his most moving films ‘What Dreams May Come’ which explores the concept of the afterlife. Asteroid Sphinx was conjunct his Sun – it’s as though there was a never ending mystery about himself and his identity that he was trying to unravel.

At the time of his death, Mars had been transiting through the 12th house, stirring up the unconscious. Pluto was in opposition to his tight Mars-Uranus conjunction in the 8th house. There were some deep and evidently distressful psychic shifts occurring. The progressed Moon was also moving through the natal 8th house – traditionally sometimes a challenging time as we sift through psychic debris, come to terms with death and changes and occasionally making life changing decisions. The Sun had just passed over natal Pluto triggering transiting Pluto perhaps into violent action with Mars/Uranus.

But it is through the Lunar Return that we can perhaps see why now. With the natal Moon conjunct the North Node it is perhaps not surprising that he was sensitive to Lunar motion. Robin’s death was recorded at 12.02pm 11th August 2014. His Lunar Return would have been at 9pm that evening. It seems as though that Lunar Return chart was already in effect. 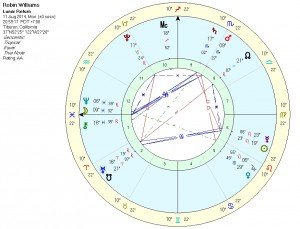 The Lunar Return is striking in itself putting the Moon directly on the Ascendant with Neptune in the 12th (echoing the natal chart) and Chiron in the first. My immediate reaction to this was that life may have seemed too painful (Chiron) and he just wanted peace (Neptune). There is a sense of surrendering to the pull of the cosmos – the womb and the tomb. The Ascendant Sabian of the Lunar Return is ‘Men Traveling a Narrow Path, Seeking Illumination‘.

The North Node of the Lunar Return is in the 8th house traditionally associated with death. The Sun is in the 6th house with Lilith – haunted by old illness perhaps. I note Venus on the anaretic 29th degree of Cancer and both Venus and Jupiter in the 5th house. It makes me feel as though perhaps he knew how much and how deeply he was loved – but the quincunx from Jupiter to the Moon on the Ascendant made it hard for him to understand why. Just looking to the Ascendant here feels like drowning in emotion – overwhelming. 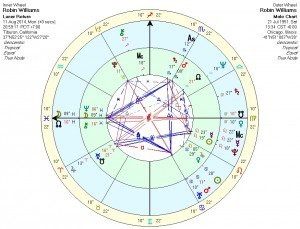 But when we put the natal chart around the Lunar Return chart, that is where the picture is fully revealed. The natal nodal axis is right on the Ascendant – Descendant axis. I have noted many times that the nodal axis crossing this angle highlights a feeling of life and death. Here it immediately shows to me a karmic choice – to live or to die. Most often I see this connection of the Nodes with the Ascendant-Descendant as a metaphorical journey. Sadly in this case it was literal. With the Ascendant of the natal chart conjunct the Lunar Return Saturn, it became a reality. 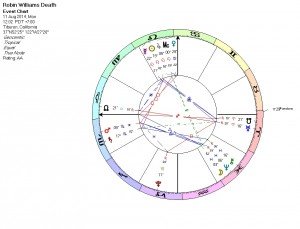 Note that in the chart for the time of death, the Nodes echo the position of the natal nodes lying across the return chart Ascendant-Descendant axis. The traditional malefics sit in the first house of this chart – ‘self harm’. The Moon is closing in to a conjunction to Neptune – escape, despair [of an actor with the 5th house connection]. Pandora too is exactly on the Descendant of this chart. All the ‘evils’ had erupted out. Perhaps Pandora here represents an absolute loss of hope – or perhaps the hope of a better place.

Robin Williams was a brilliant actor with the capacity to move the audience from laughter to tears. Endearing and kind, he was extremely sensitive to the criticism of others but perhaps with Venus conjunct the South Node in the 10th, he was his own harshest critic. I hope that he has found the peace he was looking for. I wish he had stayed.

Astrology can certainly show times of crisis. As an astrologer, it’s part of my job to uncover these times, to make the client aware of when something may be particularly challenging but also to offer ways to use the energy available. But sometimes, it’s also about looking away from the chart to look at the person themselves because they are the ones living this energy. Essentially its all about love and compassion and walking alongside for a little while, holding up a lamp that was lit when I too was in the dark.

If you know someone who is suffering from depression, call them – today.

If you know someone who is alone, go and see them.

And if you are suffering, reach out to someone – please.