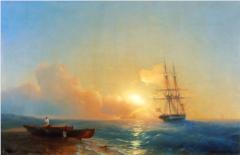 Mercury initially stations in the very early degrees of Scorpio. He dips his toes into the water then pulls them out fast because he can’t see to the bottom and doesn’t know what’s lurking there. And maybe you too get a glimpse of something lurking beneath. It could be an actual event or just a feeling – something that you can’t quite shake off but you want to back away from.

In the station retrograde chart, Mercury is trine to Neptune. Your imagination is in full swing. Maybe there’s high seas. The Sun also is tightly square Pluto so there’s a compulsive edge. Maybe you fear a storm is coming. Maybe you don’t want to admit you have a dark side. Perhaps you can be self-destructive. Yet this aspect also speaks of a powerful ability to create. You just have to own it, all of it – the good and the bad. You’re in control. Accept that there are grey areas inside you – conflicting opinions, thoughts and beliefs. Sometimes you are bright and happy, other times you are dark and miserable. Both states are an expression of you as is every state in between. Jealously and hate sit side by side with love and fairness. 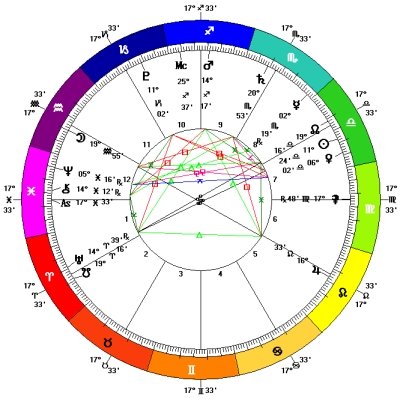 Mars is square Chiron – ouch! It’s like watching a horror movie with your friends. It’s gross, you’re giggling and you have to see the end but privately you think it might give you nightmares later because this is just what you were afraid of. Yet part of you needs to know about fear. Part of you needs to sail into the centre of the storm to find the calm.

But you’re not quite ready yet.

Maybe you get so caught up in the pain that you don’t notice Mars trine to Uranus and Jupiter. The retrograde occurs against a backdrop of a fiery Grand Trine which promises this period has a creative force of spiritual growth behind it. There’s real motivation here to go beyond and it will keep pushing until you do.

The Sabian symbol for the station degree is :-

You need to enlist other aspects of yourself in order to create a safe space within, to feel at home within yourself. Integration comes through co-operating with different facets of mind and personality.

As Mercury trips back over the eclipse point on the 10th October maybe you get a sense of déjà vu – or maybe it’s a premonition, a rumble of thunder. Your inner prophet has a hunch. Listen to those feelings as they have something to tell you. It’s a quiet inner truth, even if you don’t want to hear it.

As Mercury re-enters Libra, you find you can breathe a little. The horror movie soundtrack has changed. There’s still tension but the big bad is somewhere out of shot. In Libra, Mercury is asking you to take a long hard look at yourself because some of that stuff that’s lurking in Scorpio may not be yours. Some of it may belong to other people. And some of it may be yours but you’re not seeing it. Look in the mirror. Talk with your friends, your lover, your family about old times. See if they remember them the way you do. It’s not about arguments, it’s simply reflection.

Mercury moves in to a conjunction to the Sun on the 16th October. There you are! Now the lights are on and somebody’s home. Now you can start to clearly see what you were scared of. Perhaps now you realise it wasn’t so scary after all. The Sabian symbol for this conjunction is :-

A Butterfly With A Third Wing On Its Left Side

You are in development. You aren’t mutating into the fly, you are becoming something even more extraordinary; someone even more unique. Stretch your wings a little, contemplate your growth up to now. Mercury is receiving direct orders from the creative force. Your spirit informs your mind that you are all that and more.

Maybe you’re thinking it’s odd, how we are all so different. Maybe you’re wondering what this third wing is all about. If I follow this path, will it make me look weird to everyone else? Does it really matter? What matters is whether you can fly.

On the 17th October, Mercury moves into a conjunction with Venus. Now you are starting to see the beauty of it. Tentatively you flap that third wing and eye the pattern that’s emerging.

A sextile to Jupiter from Mercury on the 20th October sees you beginning to see the benefits of what’s emerging from your unconscious. No longer is it something frightening. Now you can see it’s an opportunity for growth. Change is happening. It can’t be stopped or blocked. Go with it. Adapt. This is what you are here for.

A conjunction between the North Node and Mercury on the 21st October gives it a name. Name that old ghost something silly. Laugh at it. It’s not so scary now! Perhaps now you can begin to speak your truth because you can see the path ahead. The clouds have evaporated. It’s just a learning process. Perhaps too, this is a time to renew or break old karmic debts and contracts. Release what isn’t yours.

Finally Mercury stations direct on the 25th October. He’s in a waning opposition to Uranus and waning square to Pluto. But you know you’ve been here before, right? No need to get stressed. No need to fear heading back towards those deep waters because now you have a different perspective and you’re better informed. Mercury is heading back towards a sextile with Jupiter and will soon rejoin the North Node. The future is wide open.

After navigating the high seas of the unconscious mind, you return to a state of calm. Wisdom is a state of being where emotions of all kinds can roll up in waves but instead of being drowned by them, you can now float, riding the surf. It’s the perfect storm. Where there was once struggle for control and a driving compulsion to reach the farthest shores, now there are calm waters. At peace with yourself, you can see right down to the bottom of the ocean.

The retired sea captain wanders back to his newly built home, pauses to watch the clouds, marvels at glorious butterflies that dance around the door. Where once he had to travel far to find himself, now he only has to look within. The storm has passed.

Themes of this Mercury Retrograde

If you have planets or points between 16 Libra and 2 Scorpio, this retrograde will be of particular significance. Look to those planets or points for clues to what is lurking in the psyche. Turn those shadows into helping hands.  Fish for the truth. Be willing to reflect and to look at your reflection in others. Embrace what you are becoming. This is about regaining your balance in order to get to the bottom of fears. Once you find your inner peace, things become crystal clear.

And for more help, check out my previous article Mercury Retrograde Through the Houses

Painting – ‘Fishermen on the coast of the sea’ by Ivan Aivazovsky