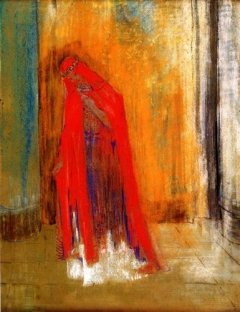 This Lunar Eclipse hits a trip wire with a conjunction to Uranus which simultaneously connects it to the spinning Catherine wheel of the Grand Fire Trine and the explosive potential of the Uranus-Pluto square. Eclipses are unpredictable by their nature but this one has an extra helping of ‘you didn’t see it coming‘ just for good measure!

And sometimes that’s good. Perhaps it’s in our nature to be a little suspicious around eclipses. The totally eclipsed Moon tends towards an ominous reddish colour due to atmospheric influences but despite our knowledge of the astronomical causes, the mystery of eclipses seems hard-wired into our blood. They evoke all manner of lore, legends and tales of woe. Whilst this one certainly has an edge to it, I think it’s important to remember that not all eclipse manifestations are ‘bad’. Sometimes things need to be shaken or stirred – like a good Martini…

So with the eclipse in Aries conjunct Uranus, there’s a sense of this being hot, hot, hot! It has a kick. The desire nature is awakened. Venus also perfects a square to Pluto. ‘I want’ says this eclipse. Suddenly you may see what you were trying to do all along. Suddenly you may have what you want. Suddenly what you thought you wanted may disappear. Suddenly you may change your mind altogether and go for something else…

Whatever it is, this eclipse is pushing for liberation, freedom, action. The eclipse position in the chart turns that Grand Fire Trine into a Kite. Something is taking off. With Mars, ruler of the eclipse, moving in to trine Jupiter on the same day this is symbolic of the freedom fighter surging ahead or making a break. These are powerful movements that could evoke inspiration and motivation or a furious, righteous rebellion or attack. In traditional astrology, lunar eclipses tend to be about ‘the people’ as a whole so it’s possible that this eclipse could signify some kind of uprising or connect to situations that affect the masses. Generally, as an amped up Full Moon, this eclipse brings things to a head which could be cathartic and explosive. Bearing in mind this is a South Node eclipse, it has a quality of release plus it is also hitting on the degrees of the Cardinal Grand Cross back in April. Given the current tensions in the world, this has a reactionary quality to it – trigger happy. It’s rocket fuel. This is also the Hunter’s Moon which gives it a distinct predatory feel. 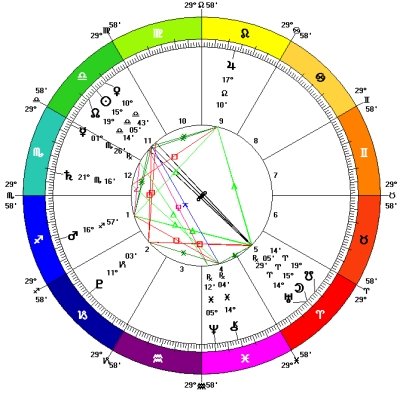 On a personal level, the same qualities are present and this can be expressed in both positive and negative ways. It could be the kick up the backside you were hoping for, the rocket fuel you need to propel yourself forwards. It’s breaking the sound barrier, smashing limitations aside. Yes it’s loud and animated and what floats through my head is noisy, amusing cartoons like Road Runner. Things may seem larger than life. That too could be a caution – stay aware that things may seem much bigger than they actually are so if everything feels like it’s mayhem, let the dust settle first. With Mercury retrograde also in the picture and conjunct asteroid Kasssanda, it’s possible that some truths won’t be heard until after the retrograde period is over and Mercury once again crosses the same degree on the 9th November.

With the vivid nature of the Grand Fire Trine along with the awakening potential of Uranus, this lunar eclipse could come like a bolt from the blue. It has electrifying energy which you can draw upon. If you’ve been feeling boxed in since that Cardinal Grand Cross, this lunar eclipse could throw open the lid. Those of you with planets or points between 12 – 17 degrees of the Cardinal signs (Aries, Cancer, Libra, Capricorn) are likely to feel it most.

The Sabian symbol of the Lunar Eclipse is :-

This Sabian shows the action of ‘revelation’ in this lunation. The unseen becoming seen. Sometimes, it’s only in the dark that things become piercingly clear. The Moon is your emotional self, the unconscious, the shadow side. When things are confusing or disorientating, it’s is natural to react on an instinctive level. With Mars/Aries, it’s often flight or fight.

There’s something here about checking in with your own shadow self, being aware of your own nature and understanding how it comes out to play when darkness falls. The demons of your unconscious, the inner darkness that you push away can be a force for good – something that you can put to work to liberate you. With the eclipse square to Pluto and conjunct Uranus, you can either choose to keep banging your head against a brick wall trying to change someone or something else, or you can own your power and choose to change yourself. Power up and get ready to go!

The more awake and aware you are (Uranus), the more this lunation can be perceived as an opportunity to draw upon that vast and vibrant force of spiritual energy that wheels in abundance in this Grand Fire Trine. Sometimes big changes require bold reactions and a brave heart.