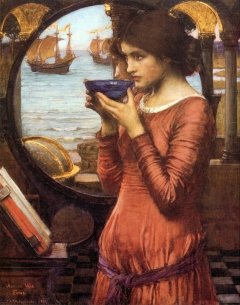 The North and South Nodes indicate our karma or spiritual life lessons depending on your point of view.

The South Node is the Dragon’s tail. It represents what you have brought into this life; the knowledge, skills and experience that you already have. It’s where you act on instinct and shows what comes easily to you. It is the place you fall back on for comfort and the area where you are often inclined to get stuck.

The North Node or the Dragon’s Head is what you are moving towards. It indicates the path that you are pushed (and sometimes shoved!) towards. It is a calling, a spiritual mission, the point that marks your spiritual and soul growth. And for that reason, it is often a challenge as we don’t want to move out of our comfort zone. These new things that stretch experience and understanding feel uncomfortable, scary and yet curiously full of potential. Ultimately, fulfilling the requirements of the North Node brings a sense of fulfilment.

To put it in plain terms, the tail end of the dragon excretes what it has already digested, fertilising the land for new growth. But if you don’t feed the Dragon at the head/mouth/North Node, then the resulting feeling is often experienced as a curious kind of emptiness – a sense that something is missing. The South Node is where the seeds of potential lie, the North Node needs to be actively activated and fed!

The sign position of the Nodes indicates the kind of energy you are working with. The house position indicates the area of life where the nodal issues are most likely to play out.

Generally, the transiting Nodes take around 19 years to move around the chart (18.6 years by mean node average). The move in (mostly*) retrograde motion indicating that they are a highly personal inner process.

When the transiting nodes meet the natal nodes, sometimes it can manifest in experiences or feelings that feel ‘fated’ in some way. These transits propel you towards the teachings of your North Node and challenge you to recognise the qualities and limitations of the South Node. Often they can be characterised by meeting people that can change your life (or having a life changing experience). Dreams, synchronicity and intuitive knowing can also play a prominent part in receiving the message of the transit.

Below I have listed the most important transiting Nodal aspects to the natal nodes (the conjunction, square and opposition) along with approximate ages and possible manifestations to watch for. I have also included some of my own personal experiences to give you a flavour of these transits. Your own nodal transit years may vary slightly from mine.

Your fate becomes clear. Your life path is calling. Your mission is illuminated. A date with destiny. Fated meetings. Attachment. Déjà vu. You begin to move in the direction indicated by your natal North Node placement. You feel like you’re going somewhere. Getting ahead. Learning through experience. Evolution. Strengthening. Awakening. Clarity.

Age 18 – My North Node is in Aries in the 9th house (study, far away places). I moved as far away as possible from my home (escaping mental chains of the 3rd house South Node) to go to university.

Feeling at cross purposes. Feeling trapped. Being give a choice to stay with the old or move towards the new. Intense frustration. Denial. Being pulled in different directions. At a crossroads. Unfinished business. Driving ‘hunger’ for something but perhaps not knowing what will satiate the feeling. Clues.

Age 23 – North Node transiting 6th house – A short relationship with someone I worked with. We both felt that we had known each other before and there was a strong sense of ‘unfinished business’.

Age 32 – North Node transiting 12th house in Cancer – My Mother passed away which would eventually lead to a complete break with family ties.

Age 41 – North Node transiting 6th house in Capricorn – I had a new bathroom and kitchen installed (causing chaos in daily life!). I also was very ill with an ear infection and severe dizziness.

Whilst the North Node was still on the square degree, I was watching the TV series Flashforward which was about people suddenly seeing flashes of their future! I also found this synchronicity entry in my diary which really captures the essence of this transit. I was intensely frustrated with the day job (6th house) at the time and desperate to leave and just be self employed as a writer and astrologer (natal Aries North Node 9th house).

“You enter a new work cycle, which may entail leaving your current job to pursue your dream. Follow your intuition, don’t let fear block your progress. Once you take the needed risk, things break wide open. You are the only person keeping you where you are. Once you realize this you’re liberated” ( quote from Power Tarot by T. J. MacGregor)

The past meets the present, staring the future in the face, gaining closure on past events that free you to move towards your future goal, detachment, revelations, understanding. Everything is turned upside down in order to gain a different perspective (the Hanged Man in the Tarot). No longer living in denial. Consequences. Checkpoint. Facing vulnerabilities. Learning by example. Discovering the gold rooted in your South Node. Integrating what you have learned so far. Release. A wake-up call.

Age 9 – Moved to a new county and new school (South Node in 3rd house). I remember being mocked (just the once!) for my accent. It was here that I quickly learned how to mimic accents which helped me in the future with learning foreign languages (North Node 9th house).

Age 27 – I was very unhappy in my life and wanting to be fully self employed as a tarot reader (astrology was still in learning phase at the time) but my confidence was far too low. I had a very powerful and disturbing dream where I was threatened by a man with a knife  but saved by a ‘fortune teller’ and a Native American chief who told me “Aim true and you will reach your ‘desire’. Note that the 9th house is associated with visionary work.

Age 46 – Feeling stronger whilst everything seems to be falling apart! (North Node in Aries). Recognising my confidence has increased ten fold.

Odd experiences that are like a repeat in reverse of what happened at the last Nodal return.

Recognising that I have released a lot of the mental ‘stuff’ that held me back in the past (South Node in 3rd House). No longer feeling ‘chained’ to the past.

* The Mean Node is always retrograde. I use the True Node however and this has very brief periods of direct motion.

Feel free to share your nodal transit experiences in the comments below.

If you would like to know more about an upcoming nodal transit in your own chart, you can book a reading here…