My friend, normally happy-go-lucky was seriously ticked off with her partner and not in a good place. Recently she’d found herself getting angry at the smallest things. It seemed that everything he did was specifically to annoy her and she felt disconnected. She was wondering whether he was in fact angry with her about something and this was a passive, aggressive way to address it. But part of her felt tied up in knots and completely unsure of herself which wasn’t like her at all. Something was pressing her buttons and she couldn’t make a decision on how to tackle the situation without knowing what she was really feeling or why she was feeling it. Something felt amiss but she couldn’t figure out if it was her, if it was him or just six of one and half a dozen of the other. For context purposes, my friend and partner live separately some distance away from each other and the catalyst to the reading was her partner having a week off from work but not arranging to come and see her.

“Pretty please can you have a look at my cards?”.

I said yes of course and in lieu of payment she kindly agreed for me to write this post so that I can introduce you to a new spread Thank you lovely, you know who you are 😉

As one is Virgo and one is Capricorn, I chose the King and Queen of Pentacles as the significator cards. I don’t always use a significator but in this case it felt like the right thing to do and my friend normally comes up as the Queen of Pentacles anyway. We wanted to devise a spread that could explore both sides of the story and at how the two of them could be drawn back together to resolve any differences. After some discussion we went with the following…

Cards 3 and 4 – The Resolution

Cards 1 and 2 – Five of Swords and Seven of Pentacles

Cards 3 and 4 – Two of Swords and the Hierophant 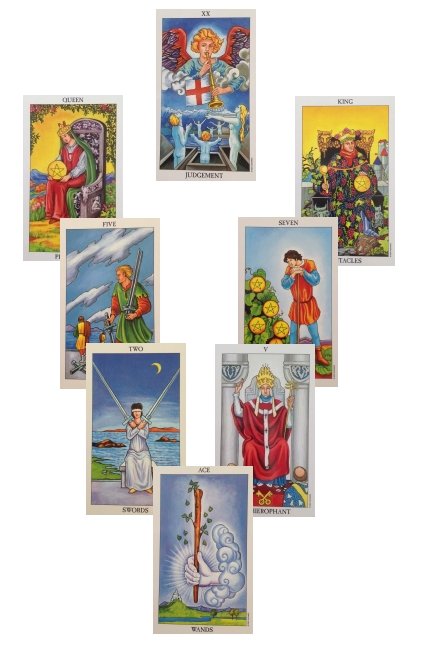 Firstly, it was immediately clear that the conflict itself was on my friend’s side with the presence of swords underneath her. It immediately made me feel that whatever was happening, the conflict was more of an internal situation that was being projected onto her partner. With no conflicting cards on the partner’s side, it made me feel like he was unaware of what was bubbling under the surface and removed the sense that he was ‘passively aggressively’ trying to make any kind of point as she’d suggested.

The Five of Swords underneath her showed the problem. Notice that the main character on the cards is facing her direction. It was almost as if she were arguing with herself instead of with her partner. In her mind, the argument was ongoing and she wanted to win but she was simply battling it out internally. She wanted to make a point. She felt that one of the men in the background of this card seemed to be her partner, walking away from a fight. For her, this held the feeling that he was ‘turning his back on her’ but also at the same time, the fear that she would lose him. The fear of losing him was what was generating this conflict which was based on a much deeper fear of loss generally. One of the other reasons for not discussing her worries with her partner was that she felt as though it sounded like ‘whining for attention’. So some part of her was wanting to start an argument to get attention, to ensure that the loss she feared wasn’t happening. It was almost as if any attention, even conflict was better than no attention. But conflict frightened her, as did demanding attention.

On her partner’s side, the Seven of Pentacles simply showed he was having a break (from work). I find this card often comes up to represent having some time out from employment – a break between jobs, a week off, a quiet time if you’re self employed. But also her partner works very hard and had been feeling quite burned out. This card can indicate ‘wondering if it’s worth it’. On her partner’s side, maybe he was just needing a break and doing his own re-evaluation of his current circumstances. It’s possible that he had sensed his partner’s mood and was perhaps waiting patiently for things to develop, letting her work through it herself. Maybe he was even feeling that any effort would be wasted, given the frosty responses he’d received recently.

My friend felt like the card illustrated her feeling that he was ‘not putting in the effort’ which in turn led her to go on the offensive. Consequently, she was feeling like the whole situation was a battle.

But the Two of Swords can also indicate, not wanting to rock the boat, feeling blinkered and feeling unable to make a decision. It’s like entering a holding pattern. It was clear that something needed to happen to break the stalemate.

The other resolution card (the Hierophant) often comes up in my readings to represent a counselor. My friend had been thinking of going to therapy in order to work through some of her own issues. But she commented that one of the things she loved about her partner was that he’s a good listener. This seemed distinctly at odds with the imagined arguments she was having with him and served as a tipping point, helping her to see things more objectively. She realized that what she was seeing in her mind was nothing like the real man she loved and based much more on her own emotional discontent. She could see that her own distrust and need to ‘win’ at all costs was blinding her to the reality of what she knew of her partner. On a very simple level, if she could be more objective and shake off the argumentative manner of the Five of Swords, she could probably talk to her partner, knowing he would listen. The ‘key’ (note the keys in the Hierophant) to the situation was about listening to each other and compromise. Notice too that in the Two of Swords, the woman’s hands are crossed over her heart but in the Hierophant card, his heart is open.

As this was a card of resolution, there was a subtle suggestion here that maybe, in this instance, she needed to make peace with herself first before engaging in any dialogue. The Hierophant as a spiritual man made me think of Catholic confession – making her peace with ‘God’ or in this case her own spiritual deity which in turn was about making peace with herself. She didn’t need to punish herself for having negative thoughts – a tendency she was prone to which only made the situation worse.

The Ace of Wands as the result card showed that full clarity was about to return. Also, the Ace is a warm card. It suggested that if she could take her time and then approach her partner in a less conflicted/angry state, the result would be a clear understanding of each other and the return of warmth and inspiration. It also made me feel along with Judgement, they have a real spiritual bond with one another.

The fact that the hand appearing from the clouds seems to be coming from the partner’s side, suggested that perhaps he was holding out an olive branch. Maybe he would do or say something to help break the deadlock.

Judgement and the Ace of Wands in a spread generally can show direct spirit communication. A few synchronicity events had already occurred which had already told my friend that things would be ok and that her fears were unfounded but she was finding it hard to trust that. Even though the situation itself was something quite small that had blown up out of proportion, it had served as a catalyst for her to resolve some issues of her own that had been holding her back for some time. It was a wake up call.

In the end, what happened was that her partner called and told her about a dilemma he’d been having at work (7 of Pentacles). He hadn’t wanted to talk to her about it because she’d seemed stressed out and he didn’t want to worry her! It was a classic case of miscommunication that had unfortunately pressed my friend’s buttons. Once enlightened (the Ace of Wands), the anger dissipated on her side, leaving her much clearer both of her relationship and her understanding of herself.

Note that there are two number Fives in the overall spread. Fives are generally connected to the idea of conflict in the tarot. The Hierophant however is also the mediator. He represents the voice of spirit on Earth. Five is the five elements – earth, air, fire water and spirit. It is humankind, the pentagram, the Vitruvian man. Five is a number we see repeatedly in nature. So the number five shows that through conflict there is growth.

Lastly, I also noted that there were no cups cards in this reading showing that the emotional flow between them had been ‘cut off’ by the presence of the swords. In readings since, the flow of cups has been re-opened 🙂

I used this reading as an example as it was incredibly clear and my friend herself is open and very insightful so her own observations brought the reading alive. I also think it illustrates how the images themselves aside from traditional meanings can play a huge part in the overall message of a reading.

Since inventing this spread, I have found it to be really useful for clarifying blocks and arguments in relationships of all kinds. Whether it’s a partner, a family member or a friend, it can help to gain some insight. I hope you find it helpful.