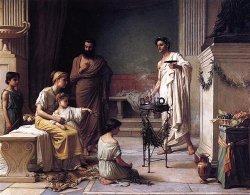 Aesculapia (asteroid 1027) was discovered on the 11th November 1923. It’s name comes from the Roman version of the Greek God of Medicine, Asclepius.

Mythology
In 293BC a plague hit Rome. Ambassadors were sent to Greece to retrieve a statue of the Roman healer God Ascelpius. Instead of a statue, the ambassadors brought back a living snake, the symbol of Asclepius. As the boat arrived back to Rome, the snake escaped and swam to the island of Tiber which was considered a sign or blessing from Asklepius so a temple to Aesculapis was built on the island.

In Greek Mythology, Asclepius was the son of Apollo and a mortal woman Coronis. Unfortunately Coronis was unfaithful to Apollo and was killed as a result. Apollo however rescued Asclepius from his Mother’s womb, giving him up to Chiron to raise and teach him the healing arts. It is said that a snake whispered the secrets of healing into the ears of Ascepius, giving him the ability to cure all ills, including the ability to bring people back to life. As people stopped dying, Hades grew angry and asked his brother Zeus to put a stop to it. Asclepius was then killed by Zeus which caused a feud between Zeus and Apollo. Later, Ascepius was placed amongst the stars as the constellation Ophiuchus – the serpent bearer.

Asclepius was the father of Hygeia, Laso, Aceso and Panacea, all Goddesses associated with healing, health and medicine.

The Rod of Asclepius continues to be used as the symbol of medicine today.

Snakes are ‘kill or cure’ animals. Their venom is both poison and antidote. Before Christianity vilified the snake, snakes were often honoured as creatures of wisdom. This sacred heritage comes through Christian myth with the snake being the creature that tempts Eve to eat the Apple from the Tree of Knowledge of Good and Evil. With snake so close to the ground, it is in touch with Mother Earth and senses all. Snake is the ouroboros, the symbol of eternity, continuity and the renewal of life.

Discovery Chart
There’s no time for the discovery chart so I erected it for Noon on the day in question. What grabbed my attention immediately is the hexagram aspect pattern created from the Moon, the North Node, Black Moon Lilith, the Sun, Mercury, Pluto and Uranus. Whilst the shape is slightly distorted and not quite a grand sextile and normally I wouldn’t use such a wide orb for Lilith, the pattern strikes me nevertheless. It speaks of symmetry, balance, the harmony of opposites, uniting heaven and earth, male and female. It perhaps connects to the idea of bringing a sick body back into harmony, that everything has an energetic pattern.

Aesculapia is situated in the Taurus, the first of the Earth signs which grounds this energy into a useable, functional form. Ruler of Aesculapia, Venus is widely conjunct Asclepius in Sagittarius and on the Sabian symbol ‘An Owl Sits Alone On The Branch Of A Large Tree‘. This indicates the value of wisdom of knowledge. Perhaps with the influence of Taurus, it refers to medicine as a ‘body’ of knowledge.

The Sun square to Neptune could relate to the idea of disease, a weakened state or sickness however the Sun is also fortified by trines to both Uranus and Pluto creating a Grand Trine. These trines make me think of the science (Uranus) of elimination (Pluto). Perhaps there is something here about discovering what makes us sick and eliminating the cause. The North Node is in Virgo, a sign connected to health. Mars is opposite to Chiron which evokes the idea of physical therapy and physical pain.

The Sabian symbol of Aesculapia is :-

With this symbol arising, it immediately brings home the idea of the drive to survive. Aesculapia then, has no qualms about taking a scalpel to the body in order to fix the wound or illness that threatens life.

Aesculapia in Astrology
In astrology, Aesculapia seems to relate specifically to medicine as a body of knowledge as well as medicine as practice. It connects to physicians and all healers of the body. Symbolically, there are associations with resurrection. The position in our chart may show where we have a ruthless drive to survive and where will do whatever it takes in order to make that happen. Aesculapia may also show where we have a weakness on a physical level.

Note – Aesculapias is the Latin form of Asclepius. There is also another asteroid with the name Asclepius which is asteroid number 4581.

Also check out this other Aesculapius painting