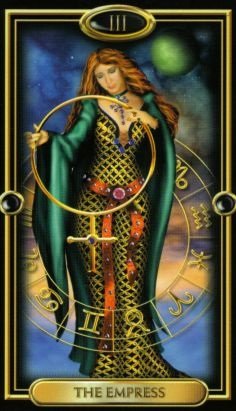 Q. What card best represents your personality (or, is most often pulled to represent you in a spread)

Since I started working with the Tarot, the card I have always identified as ‘me’ has been the Empress. I don’t actually remember when this begun but it’s been for many, many years. I’ve noticed that more often than not, the Empress turns up in the spread if I have a reading from someone else.

A friend of mine and fellow tarot reader is always the Sun card. It’s his favourite card in any deck and therefore when the Sun arrives in my reading, I know that there is something about him being shown along with any traditional meaning of the card which has relevance for me. One of the funniest things I remember happening is that one day I went to move my cards from the table, dropped them and the Sun card was the only one that landed upright. A split second later, my Sun card friend called me on the phone! Recently, we did a reading exchange and each of our significators came up in each of our spreads in the same position. This has happened several time before.

In many ways I do identify with the qualities of the Empress in that she is related to Venus which rules my Sun sign Taurus. I’m naturally voluptuous :-D. I feel good wearing green. I love animals and just simply being with those I love. Whilst I never had or wanted my own children, there are children in my life that I adore. Whilst I have my moments (don’t we all!), people have expressed I have a calm and peaceful presence. I guess I do have a nurturing side to me as I’m a natural helper, although I wouldn’t express that as ‘motherly’. But I do nurture creativity and all creative pursuits fascinate me. I sing, I write, I paint. I’m happiest in my home environment. I love walking in woodland and I always listen to the birds from my balcony. Springtime is my favourite time of year, when Mother Earth is blossoming. 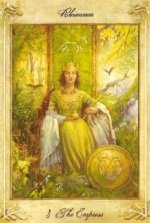 The Empress card I most relate to is the lady from the Gilded Tarot. She even has the astrology wheel behind her. I also love the Empress from the Llewellyn deck (shown here) as she has the Whitehorse of Uffington above her, a place I have a very special connection with.

So it’s as though the cards themselves decided on the Empress as my significator but if I had to choose a card myself I would probably pick the Star…with a little bit of the High Priestess thrown in. The Star is my favourite Major Arcana card and of course represents my fascination with the heavens, being an astrologer. I always have a sense of cosmic connection. It’s the sky that pulls me, that vast unknowable darkness which generates question upon question. Since I was a little girl, I always wanted to go into outer space. I long for aliens to be a known fact rather than a conspiracy or hypothesis. Looking into space, at giant wheeling galaxies, it doesn’t make me feel small. It makes me feel part of something extraordinary. The Star also relates to my Moon in Aquarius, a little remote sometimes, a little distant – yes that’s me too. The High Priestess is where I am at on a daily basis, always listening to my intuition, always searching for guidance. I meditate, I pray, I do readings, I talk to my Guides like they are sitting with me having a cup of tea.

So, The Empress, the Star, the High Priestess – these are the cards that most capture my personality.

What card do you think represents you?