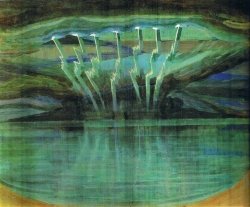 This New Moon chart hums with cosmic vibrations, not least because ruler Uranus perfects a conjunction with the South Node shortly before the New Moon becomes exact. Those of you with planets or points around 12 degrees of the cardinal signs (Aries, Cancer, Libra, Capricorn) will feel the impact most.

Aquarius is symbolised by the water bearer and this conjunction between Uranus and South Node is like having a bucket of cold water thrown over you!

“Are you awake now?” enquires Uranus

And that’s the question, whether to waken fully from your slumber or whether to attempt to continue dreaming despite your sodden PJ’s. Mars is still in a sleepy conjunction to Neptune. Maybe you don’t want to do anything. Maybe you’re flat out defeated, tired, broke, sick of the fighting, the noise, the sheer damn difficulties of life. You just want some space dammit.

Venus is still opposing Jupiter along with Mercury. It would be easy to just talk about it and do nothing, easier still just to bury your head under the blanket where it’s comfy and warm. With Black Moon Lilith close by to Jupiter, maybe you feel tired of opposing views, conflicting moralities, over-zealous belief systems and the demonisation of certain groups. Maybe sometimes you lack the faith that we can ever sort ourselves out. Maybe you lack faith in yourself, struggle to understand your own beliefs or political persuasions. Maybe you say no when you mean yes and yes when you mean no and really you just don’t know what you want and consequently you want it all.

And still Uranus says, “Are you awake now?”

Because he’s not going to STOP with this because you are a member of the human race too. You are part of the group, an individual in a sea of other individuals. Your mind is the group mind. You have a purpose here and you can choose to be part of the solution. The New Moon is sextile to Saturn, the traditional ruler of Aquarius. This lunation offers the opportunity to see reality with crystal clarity. Together we can build a better future.

The New Moon is on the Sabian :-

An Old Adobe Mission In California

Some things are built to last. Some belief systems and perspectives will serve you well. But other views, associations, groups and communities may no longer match your current experience. It may be time to question whether you feel liberated or restricted by these issues.

Saturn is in Sagittarius, so stability comes from being mature enough to let go of beliefs and ways of thinking that are no longer in line with the person you are today. At the same time, this is about taking the best from the past and applying what you have learned to the future.

Uranus conjunct the South Node deliberately throws a curve ball. He likes to shock. But in truth, the function of Uranus is to tip you unceremoniously out of your comfort zone because there are changes that need to be made. Consider this the rocket up the dragon’s tail! It often feels like Uranus causes disruption, but really he shows you where energy is stuck. He shows you where you have stopped growing for fear of change and there is no constant except change. Uranus helps you think outside of the box by kicking you out of it!

“So would you like the blue pill or the red pill?”.

New Moon questions for your journal

Where do you need more freedom?
What beliefs give you structure?
What have you outgrown?
What shocks you – why?
What is your role in society?
Who are you as a friend?
What crazy idea would you do tomorrow if you could?
What is unique about you?

and just for fun…

Would you take the red pill or the blue pill? 😀