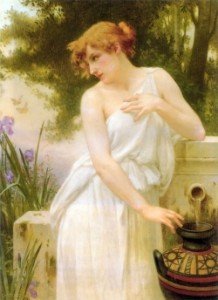 The week begins on an edgy note as Venus in Aquarius crosses over the midpoint of the Uranus-Pluto square on the 26th January. Creating semi-squares to both, Venus is at once compulsive, creative, inspired, obstinate. It’s like she’s dancing with danger, just to get some kicks. It makes me think of wild artists or writers who immerse themselves in bizarre lives to generate a good story or  compelling art.

You may feel edgy yourself, tempted, tested, out of sync one minute, gloriously inspired the next. It’s like dancing on the head of a pin, jostling with all the other angels. Maybe your nerves are easily pricked but if you can detach from the noise so to speak, this may help to generate some fabulous ideas that make you remember that you are never going to run out of ideas! But you have to make room for your muse by trying different experiences. Instead of getting stuck on what you like and don’t like, be open to other possibilities.

Venus then enters into Pisces on the 27th January where she is a whole lot more comfortable. In fact Venus is exalted here and it’s easy to see her sinking into a hot bath full of bubbles, her curves accentuated and flattered by candle-light – a large glass of wine in hand. Yes, Venus likes it in Pisces…

With Venus in Pisces, you are likely to feel super-sensitive towards others. Soft, romantic, dreamy, this is the perfect transit for those of you who are creative. And even if you aren’t an artist or musician, indulging yourself in your favourite art or music can help to generate that feel-good feeling. It may sound simple but sometimes, by re-connecting with those things you love, it re-connects you with yourself. How long is it since you sat down and listened to your favourite album whilst doing nothing else? How long since you let yourself be carried away by a book or a film? How long since you visited the art gallery or wherever else you go for you own personal inspiration? Venus in Pisces is the tug, tug, tug of the tide pulling at your heart. Make a date with yourself.

The 27th January also sees the First Quarter Moon in Taurus on the Sabian symbol :-

The Woman Of Samaria At The Ancestral Well

The woman of Samaria was considered a lowly woman and a sinner so she was surprised when Jesus asked her for water. Jesus went on to explain to her how her spiritual thirst could be satiated. He washed away her sins.

This symbol shows the importance of going beyond surface appearances. It also advocates that which connects us all irrespective of class or status. At very deep level, like the depth of the well, we all have a desire for goodness, kindness, love. Deep down we all know that we are connected. The Christian story on the surface is dated and somewhat born of its time where the woman is considered a sinner because she has been married five times and is currently shacked up with a new man! Taking out the judgement, there is a suggestion that this symbol is about forgiving yourself, loving yourself. The woman of Samaria had perhaps been married so many times because she was searching for love. In the story, she is shown how self-love heals that feeling of being rejected and ‘not good enough’.

Both the Quarter Moon and Venus echo the same message – love yourself. Do something loving for yourself today to re-connect.

Retrograde Mercury in Aquarius moves into a sextile with Uranus in Aries on the 28th January. Perhaps you begin to feel more upbeat about your plans or the possibilities that you are pondering. Watch for those little snippets of conversation you hear or that article you read which tickles something in your mind. Notice what captures your curiosity and makes you want to know more.

There is however some tension with a square between Mars in Pisces and Pallas in Sagittarius also on the 28th January which may bring up differences in opinion on the best way to tackle things. It all comes down to what you believe to be true. With a square, this may see conflict internalised where you wrestle between action and inaction, unsure of whether to follow the logical or intuitive response. Pallas and the logical response have the edge as she is also sextile to the North Node on the same day. The trick to resolve your inner differences is to perhaps dare to sit with it a while, gather your thoughts, garner your courage. It’s possible that inside you are saying ‘I can’t’ when really you know you can.

The Sun in Aquarius opposes Juno in Leo on the 29th January which may bring up some questions around what you want and what everyone else wants. Maybe you are feeling pressured to agree when really you aren’t sure. Contracts with others versus contracts you made with yourself. There are identity issues at stake. Can you be true to yourself?

The 30th January is the busiest astrological day of the week beginning with a moody square between Venus in  Pisces and Saturn in Sagittarius. ‘It’s just all so awful! exclaims Venus whilst watching the news, flicking from channel to channel to escape the sheer drudgery of war and the terrible things people do to each other. Looking at videos of puppies and kittens may feel far more appealing. The problem is that you may be feeling over sensitive to the hardships of life. In one way, this can be seen as a good thing because none of us want to become hardened to the terrible things that happen and in this day and age this can be a consequence of media that seeks the ever more dramatic headline. Whilst no one wants to get used to it, there’s also a point where you don’t want to become so overwhelmed that you feel like there’s nothing good that happens in the world.

In your own life, it may be that you need to confront some of those not so nice obstacles that seem to block your progress. Sometimes you’ve just got to get it done, even if you don’t feel like it. The pay off is that afterwards, you’re likely to feel a lot stronger.

Some help comes from retrograde Mercury meeting in a conjunction with the Sun in Aquarius, also on the 30th. Suddenly your eyes adjust to the light and it all begins to come clear. Mentally, you may feel like some of the fog has lifted so even if your Venus side is still grumbling, your mind knows that the future unfolds within the present. What you do today counts and this leads straight into the next major aspect for the day which is…

Mars in Pisces sextile to Pluto in Capricorn. This can be used as a default setting. Find a way to tap into your motivation because once you do, there’s no stopping you. Mars sextile Pluto needs to have something to get his teeth into. It’s one of those days where you can either choose to be crushed, overwhelmed and unable to deal with unhappy feelings or you can muster up some courage and determination to change things. Mars asks – what do you really want? What can you do about it? What will it take to get moving again?

And we are still with Mars on the 31st January as he forms a conjunction to Chiron in Pisces. This is about having the courage to heal.  I have a thing about etymology. I’m fascinated by the roots of words. The word ‘satisfaction’ comes from two words – satis which means ‘enough’ and action. Satisfaction – the feeling of being satisfied, fulfilled, complete – is based on taking enough action. You have to make it an active process.

The challenge with this aspect is that sometimes anger can get in the way of healing. There can be a temptation to over act – over react! Old hurts can bubble up out of nowhere to slap you in the face. Maybe someone is insensitive towards you and you feel rejected and angry! Old conflicts, internal or external may arise which puts you on notice of where further healing is required. Mars might want to drown his sorrows or fight it out, neither approach is helpful.

Chiron however is a mentor as well as a healing figure. He can teach Mars where his weak points are. Mars of course doesn’t like this but if he’s willing to listen, he’ll be a better fighter all round. Whilst this transit may see some vulnerabilities emerging, aim to see this as a positive. You need to know where your guard is down and also where your emotions get the better of you. Mars conjunct Chiron in Pisces reminds me of tai chi – a soft, meditative martial art that can be used defensively if necessary. Ultimately it’s more about channelling and understanding your own energy than ‘fighting’ your opponent. This is the way of the peaceful warrior. Those of you with planets or points around 15 degrees of the mutable signs (Gemini, Virgo, Sagittarius, Pisces) are likely to feel this the most.

The week ends on a sweet note with Venus conjunct Neptune in Pisces on the 1st February and we are back to soft lights, candles and music again! This is a romantic aspect, perfect if you want to spend a little time with your honey but also wonderful for indulging in some quiet time for yourself too. The only niggle here is that when these two get together there can be a tendency to see the world through rose-coloured spectacles. You see what you want to see under this aspect and therefore caution is required, especially in matters of the heart and financial agreements. Things that seem too good to be true under Venus conjunct Neptune, probably are.

This is a lovely influence however for practising healing, meditation, prayer, compassion. Watch the sunset, listen to some Chopin, Phillip Glass or David Darling for some soul soothing musical delight. Surrender to love.

Painting – ‘ Beauty At The Well’ by Guillaume Seignac