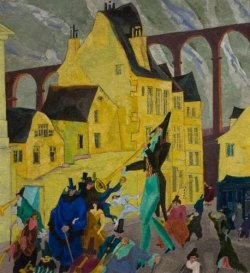 This is a noisy Full Moon! The Moon is conjunct Jupiter, loud and proud in Leo and trine to Uranus. It feels as though someone is sounding a trumpet – like Gabriel announcing the day has come.

It’s a call, a wish, a dream, a desire. Leo is the sign of self expression, creativity, children. Leo loves to be seen and with the Moon conjunct Jupiter, it would be hard to miss this show. Uranus is pressing for a dazzling finale, a sweeping bow and a brilliant smile. But maybe you aren’t sure if you want to take centre stage. Those old feelings of failure, stage fright, performance anxiety come back to hit you in waves.

The Moon is at the apex of a boomerang yod with Pluto in Capricorn sextile Chiron in Pisces at the base. There’s a chance here to heal your demons – the ones who tell you that you will fall flat on your face in front of everyone. The ones that tell you everyone will laugh. These are the voices that whisper even when the crowd is applauding and telling you how well you did.

I have horrendous stage fright. You would never believe that I am Leo Rising with Jupiter in the 1st house. Sure I’ve sung on stage, given talks, put myself out there – but not without extreme anxiety beforehand or after and yes I over-rehearse…because Leo does care very much what you think, even when he says he doesn’t. Because the little child in all of us wants to be praised. And those of us who were perhaps criticised too harshly as children, who grew up not feeling good enough, these old demons are hard to exorcise. Their insidious whispers resound even after applause dies away.

I dreamed the other night, I was watching a carnival coming down the street. There was a woman playing a flute, melodic and lovely.

A Pageant, With Its Spectacular Floats, Moves Along A Street Crowded With Cheering People

I tried to find the flute player in the crowd but I could only hear the melody. When she finally appeared, the flute was huge, carried by around 40 people, giant holes released the sound. I was trying to figure it out – how is she playing this huge instrument? The Full Moon will exactly trine my Midheaven and Venus. Perhaps this Full Moon for me is a reminder that the song I play, the work I do is carried by others in their souls too. It becomes part of their song. It feels a great responsibility and it’s also a great joy. But equally, the flute is seriously over-sized. I have a tendency to over-reach, to try to do the work of 40 people! All I need to do is play my song. With Jupiter in Leo and quincunx Pluto, there’s a caution not to make a drama out of a crisis.

And this is the meaning of the Full Moon Sabian. It’s about being spectacular by just being who you are. Pluto quincunx to the Full Moon has an abiding fear of being found out or caught out. Jupiter is saying believe in yourself. Chiron feels vulnerable with all those people staring at him.

There’s a tendency to go overboard in an effort to make an impression, to over-promise because you think that people need more than you have to give. The trick is to speak your truth. Give only what you have but be generous with it. Let people take from it what they will. Take five people to the theatre, each will come out with their own understanding of the show. Life is pretty much like this too. You can only do your best and then the rest is in everyone else’s hands.

At this Full Moon, this is a time to celebrate your achievements. Maybe you need to take the spotlight and face those fears. Perhaps there is something you’ve been wanting to do but it could be uncomfortable. This Moon says give it a try – in fact, it’s shouting.

Uranus would love to show off your unique talent or perspective. Bearing in mind that Uranus is the ruler of opposite sign Aquarius, there may be an element of shaking things up, doing something you don’t normally do which effectively shines a light on you. Perhaps you decide to put yourself out there, despite what everyone else might think. It’s scary (Pluto) and it might hurt (Chiron) but with protective Jupiter nearby, you may walk off that life stage feeling just that bit bigger than when you walked on.

Listen for the fanfare.
Take a bow.

Those of you with planets or points around 14 degrees of the fixed signs (Taurus, Leo, Scorpio, Aquarius) will feel this the most.

List 10 achievements in your life
What are you most proud of?
What is your best talent?
What makes you unique?
Where in life are you afraid to put yourself in the limelight?
What would your inner child like to do today?
What is the most important praise or advice you ever received – who from?
Who do you look up to?