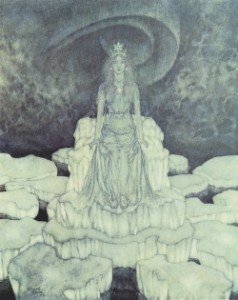 Imbolc blessings to those of you celebrating. The week opens with this ancient sacred Fire festival. The wheel of the year turns again as in the Northern hemisphere it is time to acknowledge and honour the strengthening Sun and emergence of life. Whilst still in the depths of winter, snowdrops appear to remind us that spring is coming. At this festival, the Goddess is returned to her virginal state. This is a time of purification and cleansing.

With the ground frozen and cold air billowing around you, the Sun conjunct Spirit captures this life force. In winter, you can see your breath. It reminds you that you are alive. You can physically see your exhalations. You are spirit living an earthly life. Capture the spirit of the Sun and light a white candle, representing your pure inner light. Focus on your breath – the signifier of life. Cleanse your home physically and energetically.

With the Sun sextile to Uranus, this is an opportunity to clear the air. Aries is loud. One way to cleanse your home of negative energy is to clap your hands loudly around each room or bang a drum if you have one (and the neighbours don’t mind :-D). The idea is to get things moving. Clear those corners of your home, oust the dust bunnies. The Sun, Spirit and Uranus are bright and sparkling like a crisp winter’s morning.

Sun sextile Uranus is perfect for creative inspiration. What parts of your identity lie undeveloped but itch to be brought into being? What spiritual seeds are you planting? This is a revitalising transit that helps to clarify your intentions. Make life extraordinary.

A Full Moon in Leo on the 3rd February continues the loud and proud theme as the Moon is conjunct Jupiter and trine Uranus. This Moon also is a prelude to a yod pattern that is coming later this month. The main post on the Full Moon is here but suffice is to say that one of the themes of this Moon is about letting go of the fear of rejection and judgement that stops you performing and inhibits your light. Inhabit your light! Sometimes its necessary to take centre stage, to let the world know you are here.

Whilst this Moon has the potential to exaggerate, show off and create dramas, there is something quite dazzling about it. Express yourself. Those of you with planets or points around 14 degrees of the fixed signs (Taurus, Leo, Scorpio, Aquarius) are likely to feel it most.

The 4th February sees a rather irritable vibe with Mars in Pisces moving in to quincunx Jupiter in Leo. It feels as though this aspect is the next natural step from the theme of the Full Moon. Mars in Pisces offers you the quiet confidence to strut your stuff but there could be issues over how much force to use. How many steps forward do you push yourself? How far is too far? There may be concerns over feeling ‘too pushy’ versus frustration at being left in the wings. Maybe that you feel excited by possibilities but energies are unfocused and dissipated.

Working at its best, the quincunx can point to where you need to be more aware of your own strengths and also to know that you don’t need the consistent approval of others in order to keep moving forwards.

This is humanitarian aspect that can evoke great acts of kindness and compassion. If you are still struggling to take the limelight, put your focus on someone else who may need your attentiveness and generosity.

Retrograde Mercury offers focus and stability on the 5th February with a conjunction to Vesta in Aquarius followed by a sextile to Saturn. Mercury conjunct Vesta gives voice to the flame. What you mentally focus on grows in light. In the airy, fixed sign of Aquarius, there is a strong sense of stillness. If you have a project or situation that has been vying for your attention, today would be a good day to dedicate some time to it. Saturn allows you to stay aware of the big picture, even if you are laser focused in other areas. The conjunction takes place at 3 Aquarius so those of you with planets around here can make productive use of this transit. Essentially this day is about mental discipline. If you struggle with distraction, try something like the Pomodoro technique where you work in short timed bursts. It’s amazing how much you can achieve in short periods of time.

The Sun in Aquarius opposes Jupiter in Leo on the 6th February. There’s a danger of trying to be everything for everyone and it just doesn’t work! Splitting yourself into too many pieces to please everyone else can leave you feeling shattered.

Alternatively, you may be feelings ultra confident that everything will turn out fine, fine, fine and you can absolutely take on that next big project, oh and finish this and plan that and host the best ever dinner party for 26 people whilst simultaneously learning to ice-skate…Yes, this transit is inclined to run away with itself sometimes. It’s great to be super charged and positive but bear in mind that this level of inspiration can’t always be sustained. It’s about moderating too much with not enough. There is a restless edge to this transit which may manifest as a desire for adventure. Spend some time planning a holiday or investigating whatever it is you would like to do to channel some of this restless energy into something positive.

The 7th February is generally quiet but a couple of small transits caught my eye. Still with the Sun in Aquarius, I noticed the Sun is conjunct asteroid Icarus and square to asteroid Atlantis in Scorpio. Icarus was tired of living on Crete and wanted to escape to investigate the rest of the world. There really is an urge to flee, to fly, to go up, up, up and away – especially with the Sun still in orb of that over-ambitious opposition to Jupiter yesterday!

Atlantis represents ancient knowledge, a mystery in our history. But Atlantis was also destroyed. There is something here about wanting to know too much, too fast. The danger of going at such a pace is that you miss something important. At the same time, the opposite may be true. Maybe you are afraid of learning, afraid of going forwards, afraid that if you fly to high you might get burned. Perhaps you are afraid of getting too far above your station. Others try to talk you down but is it because they care or is it because they don’t want you to go beyond where they are, leaving them behind? Only you can resolve the conundrum. The key is to keep one foot on the ground whilst you embrace the mysteries of life. Those of you with planets or points around 18 degrees of Aquarius or Scorpio may feel this transit.

The week ends with Venus in Pisces sextile to Pluto in Capricorn on the 8th February. In fact, this transit could be very useful for grounding some of these ethereal, high flying energies this week. The tenderness of Venus in Pisces become exquisitely intense as she reaches to Pluto to make real these transformative senses. Whether it is grounding through sexual contact or through creativity, there is an urge to give form to feeling. There is intense pleasure to be had through connecting with others who have similar values to your own. The attraction factor is at work.