Home Tarot On Fairies and the Hierophant

When I was little I believed in fairies. I thought the trees talked to me, that flowers sang and grass whispered. I called lavender ‘the magic plant’ and made rose water from petals. As I grew up, I never stopped believing only I started to think of the fairy folk as elementals, beings living in a different dimension that overlaps and somehow interacts with our own.

The other day, I wrote the question ‘Do you believe in fairies?’ as the first line of my daily cosmic update. Just a few minutes after writing that line, the same question came up on the Tarot Professional Facebook group. It was one of those odd synchronicity moments that catapulted me back to an experience I had when I was around 22 years old. It made me think that perhaps I needed to revisit this as something from that time may be relevant now.

Back then, I was a mess. Depressed, suffering from anxiety and well on the way towards my first nervous breakdown. I would wander to the woods in an effort to escape the drudgery of working in a factory and the horror of home. Functioning mostly on autopilot, my spark was hiding far in the dark, terrified of coming out.

In the woods I felt safe. I could be alone. I would go to ‘my’ tree and tell it my troubles. My tree was a huge beech with a hollows in the base of the trunk. Her sister had been cut down so I would sit on the stump for hours. Each time I would bring a gift and set it inside one of the hollows – a fairy cave I called it in my mind. My grandmother always used to talk about being kind to fairies and showing them gratitude so it just seemed natural. The hollow filled with pretty stones, feathers, a marble, a coin, flowers.

That day, the day it happened, I was beside my self. I could not see any hope or a way out. That day I didn’t talk, I just sat, numb with pain and paralysed with indecision. Somehow, as my breathing slowed, I began to be acutely aware of the smallest of sounds and a presence of ‘other’. My skin tingled, the cloud lifted and suddenly everything was in sharp focus. I caught a glimpse of something small and fast beside me, down by the hollow. I turned just in time to see a fleeting tiny figure bounding from the tree into the leaves. But it wasn’t the figure that made me smile – it was the laughter which I can only describe as like tinkling bells. It was joyous and teasing all at once. That laughter said ‘catch me if you can!’. And then I looked up and saw a deer. I had walked in those woods so many times and knew the deer were there but had never seen one. The deer was out in the open, right on the path in front of me – curious for a little muntjac as they are usually so nervous. She stood and looked at me and I looked at her. She continued to stare and the more she stared, the more I felt like she was communicating. The fairies sent me as a gift her eyes said.

Deer are associated with gentleness, super sensitivity, innocence and grace. What I felt in that moment was love – something I hadn’t felt for a long time. It was unconditional. 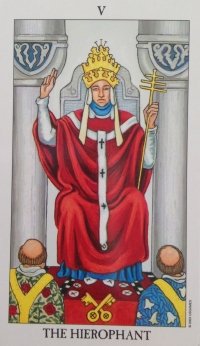 Thinking about this moment some 25 years later still makes me smile and still inspires in me a sense of privilege and awe. As I wrote the above, I decided to draw a card to reflect on this experience and to ask what it means now. I drew the Hierophant.

On first glance, it may seem an odd choice of card but then it isn’t when you think that this is the card associated with Taurus – the first of the Earth signs in the zodiac. Taurus is the sign of the farmer and also happens to be my own Sun sign. So what I experienced put me back in touch with myself and this was achieved through being in my element – in nature. Taurus is also about survival. This experience helped me to survive one more day.

The Hierophant shows a priest, usually thought of as Saint Peter who has the keys to heaven and earth. In the tarot he’s associated with spiritual traditions, the established way of doing things. The Hierophant, like Taurus can be a bit of a stick in the mud!

Often however, I find this card shows up to mean a counsellor, a therapist or even a tarot card reader! Whilst certainly traditional meanings can apply depending on circumstances, I find he is an intermediary, someone who helps you to get in touch with your own spirit. Rather than handing you the keys though, he shows you where the lock is – because you already have the key. This card makes me think of the fourth less popular core condition of ‘presence’ in Person Centred Counselling. When a therapist is fully present, bringing all that they are, being fully in the moment with their client, that is when healing can happen. Being truly heard, acknowledged and witnessed is powerful. We unlock in the presence of the pure spirit manifested on earth.

The Hierophant tells me that my mystical fairy experience was part of my path towards being a mediator between the heavens and the earth as an astrologer and tarot practitioner. The Hierophant can represent an initiatory experience. I am reminded to visit my element when I feel depleted – something that I don’t do enough now that I live in a city. I was shown what it was like to be present – to be with presence. I was shown the power of unconditional love in the gentle eyes of a deer. I’m not a Christian but it reminds me of the quote from the Nag Hammadi…

God, Goddess, Source, Presence, Spirit – whatever you want to call it is all around us. It’s there in the trees you walk past every day, it’s in the wind carrying a scent of rain. It’s scrubby dandelions on the sidewalk, nettles on the verge. It’s in clouds, sunlight, rainbows, stars and the dirt under your feet. Stand still for a moment. Can you feel it? Use your key.