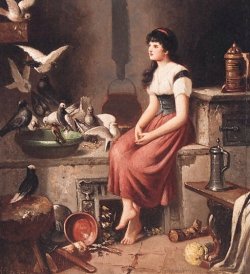 Mars in Taurus creates a sextile to Vesta in Pisces on the 6th April motivating you to focus on what is meaningful. This generates the fuel needed to stimulate a BIG think as Mercury in Aries moves in to trine Jupiter retrograde in Leo. This expansive aspect puts you in mind that there is a wide open future awaiting you. All those possibilities! There’s so much to explore, so much to learn. The excitement builds with a conjunction between the Sun and Uranus in Aries. If you have planets or points around 16 degrees of the cardinal signs, you may feel the fizz of anticipation here. The only caution is to stay in tune with the quiet flame of Vesta rather than leaping into snap decisions. This is about setting light to your inner fire rather than burning rubber on the road so to speak.

The Sun conjunct Uranus encourages you to embrace your originality. What perspective, skill or talent is uniquely yours? Look for ways in which you can bring this out into the open. This is the perfect day for a brainstorm session. How about a bucket list? Set your timer for 10 minutes and blast down every crazy idea you’ve ever had about what you would like to experience whilst living on planet Earth.

Mars is also quincunx Saturn today – yes it’s a busy day in the skies! Don’t censor yourself when writing your list. It’s not about whether you have the money to afford it or whether you could do it with your other responsibilities. Free yourself from the chains of ‘I can’t’. Quincunxes ask you to get out of your own way. With Mars and Saturn, it’s about figuring out how to incorporate both – sure you’ve got responsibilities with Saturn but does that mean you really can’t ever do what you want to do? It’s all hypothetical right now so no harm in writing it down. Think big with the Mercury trine to Jupiter in mind. Stop after 10 minutes and read your list back over. It should make you feel excited, motivated. Now…can you pick one thing off your list to start on? I’m betting you can…

It’s all squares on the 7th April as Saturn retrograde in Sagittarius moves in to square Vesta in Pisces and Mars in Taurus squares Juno in Leo. Perhaps your commitment is wavering. Maybe you are feeling held back from your true calling. Maybe your path seems too hard, the tests too tough, the work too much. It’s possible that your motivation is sapped because you’re questioning your direction. Sometimes you need to push on regardless. The blessing with these aspects is that once you get into the groove and get those muscles warmed up, you’re able to do much more than you think you could. Mars and Saturn produce a unique kind of staying power when used productively. Often overwhelm is caused by thinking too far ahead so maybe yesterday’s futuristic visioning has you wondering how on earth you can ever get there – wherever there is. The trick is to just focus on what needs to be done today. Commit to that and the light will reappear.

The 8th April is vibrant with aspects as Mercury in Aries kicks off the waning Uranus -Pluto square with a square to Pluto first followed by a conjunction to Uranus. You may find yourself obsessing over something, determined to get to the bottom of it. Perhaps you feel suspicious or paranoid. Maybe the truth cuts deep. The challenge today is that it’s all too easy for words to burst out that have far more force than intended. If you are tempted to send a stinging reply to your boss, partner or another – give yourself a day before hitting send.

There is a certain amount of anxiety with these aspects. Sometimes internally they can produce unwelcome sudden thoughts, especially if you have hard aspects between Mercury/Uranus and Mercury/Pluto in your natal chart. Technically called ‘intrusive thoughts’, the tendency is to try to shrink away from them but the more you do this, the more force they apply. If you suffer from this, remember everyone gets them and there is a huge difference between a thought and an action. If something unwelcome pops into your head, accept it and move on to the next thought.

Using these aspects positively ignites a surge in creative thinking, passionate and compelling communication, flashes of brilliance and powerful solutions.

A helping hand comes in the form of Jupiter as he also stations direct on the 8th. This powerful movement shows that you are about to start expanding, developing or applying what you’ve learned during the retrograde period. Look to the house where Jupiter is travelling in your chart and spend some time considering what this may mean for you. During the retrograde period, you were asked to reassess your progress and to tweak plans in development to match inner and outer growth. Now you may experience a surge in motion, a feeling of being buoyed up by inner faith.

Pallas helps you to get your head straight on the 9th April as she moves into the sensible sign of Capricorn. Whereas the beginning of the week was all inspiration and possibilities, Pallas would like you to figure out a way to make it real. Pallas in Capricorn shows the wisdom in planning and structure. Whilst it might not be exciting, a good plan can give you the grounding necessary to achieve your goals. Pallas here is the ultimate architect. Look to the house which has Capricorn on the cusp in your chart. With Pallas travelling here, you may need to go back to the drawing board if things aren’t working as hoped. But that’s OK because Pallas helps you to see the patterns you have created and where the weak points are. Pallas in Capricorn also knows that timing is everything.

The Sun conjuncts Mercury in Aries on the 10th April. The Sabian symbol of the conjunction is :-

Feed your mind. When Mercury visits the Sun, it’s like going back to source for instructions from the Great Spirit. If you have felt starved of inspiration or a sense of connection, use today as an opportunity to connect with your higher self. This is about engaging your mind with your higher purpose. If you are struggling with this, then a simple way to honour this aspect and tune in to the symbolism is to go out and feed the birds! Remember bread isn’t very good for birds, especially white bread and definitely don’t feed bread to ducks or geese at the pond. Try defrosted frozen peas instead or halved grapes. For birds in your garden, go for a handful of breakfast cereal, porridge oats (uncooked), rice (cooked), seeds, nuts and vegetable scraps. When you see a bird eating the food you have left, visualise them carrying your intention upon their wings as they soar back into the sky.

Venus moves into Gemini on the 11th April. This is the social butterfly aspect. Venus in Gemini doesn’t want things heavy so keep it light. This cools feelings but also adds a level of flirtatiousness to communications. It’s perfect for charming your way into someone’s affections although Venus in Gemini can get bored easily! Watch your purse strings with Venus here as it’s easy to fritter away money.

Ultimately, Venus in Gemini wants good conversation and a pleasing mental connection. This aspect could be perfect for important meetings, network gatherings and friendly get-togethers. The key here is to follow up on what attracts you. Variety is the spice of life. Be open to new experiences and connections.

The end of the week sees the Last Quarter Moon in Capricorn on the Sabian Symbol : –

By Accepting Defeat Gracefully, A General Reveals Nobility Of Character.

Also on the 12th April there is a sextile between Mars in Taurus and Neptune in Pisces.

Both of these planetary movements seem to describe grace under pressure. Whilst the Quarter Moon reminds you that not every battle is won, the Mars-Neptune sextile suggests that winning isn’t what counts. What counts is that you tried. Mars sextile Neptune brings out the spiritual warrior who knows there is a higher meaning to everything that happens.

If you are struggling with feeling defeated in some aspect of your life, an act of kindness towards someone else could help to shift those feelings. Compassion towards another promotes compassion towards yourself. Where Mars is travelling in your chart shows where you are prompted to act. Where Neptune is travelling shows the area where life needs to feel more meaningful. Neptune spiritualises what it touches. Mars sextile Neptune is a beautifully creative aspect. Engage your imagination to do something today that brings a sense of meaning into your life. Read a spiritual book, create a ritual, visit a sacred space. Whatever you do, remain consciously aware of the intention behind your actions.