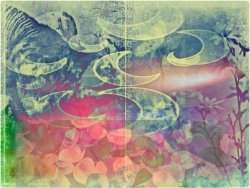 This week the cosmos gives us some powerful, pro-active energy to play with. I’m feeling this already. With my birthday on Monday, these gathering aspects will play a part in my Solar Return chart. I have been (as we say in Manchester) ‘on one’, which translates into – I have not stopped!

I’m currently balancing my laptop on a sturdy box on top of my desk in order to stand up whilst I type. Whilst my lazy Taurus Sun loves to sit to work, constantly sitting becomes painful after a time and is seriously unhealthy. Bearing in mind my Solar Return 6th house Sun, I decided to find a practical solution that didn’t involve spending silly amounts of money on a rather grim looking standing desk. This works and is curiously energising.

So, the week begins with Pallas stationing retrograde at 0 Capricorn on the 20th April. The prime negotiator of the planets backs off in order to re-think strategies. It’s possible in Capricorn, she has come across some design flaws and needs to make some adjustments. And we too maybe need to check over plans to ensure the pattern designed hasn’t got a fatal flaw in the mix. Those with planets or points around 0 degrees of the Cardinal signs will notice this the most. Don’t worry about the slow down. It’s all part of the plan.

Venus creates a trine to the North Node. Something catches your attention that you just can’t ignore no matter how much else is going on.  Those of us ruled by Venus (Taurus and Libra), may sense this subtle transit. It’s a call to your heart. An important conversation may help things move forwards.

The Sun enters Taurus today too, generating a solid, grounded earthy energy – especially as we also have the Moon, Mercury and Mars all here too. With the Sun then trine to stationary Pallas, there really is a message to take time to smell the roses. No matter how much you push, everything happens at its own pace.

With so much emphasis on Earth energy, it’s a time to focus on practical matters. Your money, your resources, your income and expenditure. How are all these aspects of your life doing? Check in and tally up. How do you feel about your earning potential? How do your feel about yourself? Do you feel grounded, connected your body, to this earthly plane? Are you really here? Taurus delights in physical sensation. It’s not just about sex, it’s about sensuality. It’s the scent of your favourite food or perfume, the texture of your pet’s soft fur, the sound of your favourite vocalist, the taste of your favourite tipple. When did you last really look around you, drink in the sight of a flower or a beautiful sky? It’s easy to take our physical senses for granted. Thank your body for its gifts, especially if you have heath problems. So often we rail against the flesh for it not being right – too thin, too fat, too sick, too painful. Sometimes we just need to tell the body that it’s loved.

Mercury in Taurus squares Jupiter in Leo on the 21st April. You may have plenty of big ideas but feel stuck as to how to get them off the ground. Overwhelmed with possibilities, the trick is to focus on what’s practical. Mercury in Taurus doesn’t like to be dazzled with promises. It just needs to know the facts. If you can rein in the temptation to over think or over expand, this aspect could help you to develop things in a positive direction.

Another ‘tell it like it is aspect’ comes in the form of Mars in Taurus trine Pluto in Capricorn. This is strong stuff, pushing you to get down to brass tacks and just get on with it. Whilst people sometimes say Mars isn’t necessarily comfortable in Taurus, under this influence there is determination by the bucket load. Bearing in mind that Mars is still in aspect of the square to Jupiter, the only caution would be know when to apply force and when to back off. There’s still a tendency to over do it. But if you negotiate this carefully then you may find that this is one of those weeks when you can power through projects. Those of you with planets or points around 15 degrees of the Earth signs (Taurus, Virgo and Capricorn) will benefit most from this Mars-Pluto combo.

The trend of strength continues as Mercury conjoins Mars on the 22nd April along with trining Pluto. If Mercury’s square to Jupiter got the best of you yesterday, this should help to bring back your focus. With Mercury conjunct Mars, this could be the perfect time to peacefully discuss changes that you want to make or that are needed. Mercury conjunct Mars can sometimes hedge towards the argumentative but Taurus tends to mitigate this. Quite frankly, Taurus cannot be bothered with arguing so tends to say what needs to be said without frills. This is honest, straight from the heart conversation. The truth doesn’t have to be brutal.

In the midst of Mercury’s movements, there’s also a lovely sextile between Venus in Gemini and Jupiter in Leo. If you need to talk money, this aspect will certainly open the airways. Money issues aside, there’s a feel good vibe in the air – perfect for meetings of all kinds and social occasions. But I’m noting the activity around Venus, Jupiter and Pluto as these planets combined indicate wealth. It could be a good week to ask the boss for a raise, market your product, go for promotion or sell your surplus. The most important thing is to keep your feet on the ground and then you’re winning.

The 23rd April is quiet as a mouse. The only notable aspect is a conjunction between Hygeia and asteroid Terpsichore in Cancer. Hygeia represents health and hygiene, Terpsichore is the Muse of dance and Cancer relates to food and nurturing. With all these other hard working aspects in play, make sure you are nurturing your body. Like I said at the beginning with my stand up desk, the body needs to move. If you work from home, get up and dance around – heck, even dance while your typing if you can. I’m currently toe tapping to music J Make your taste buds dance too by giving them cell reviving clean foods and mineral water by the gallon.

A small road bump appears on the 24th April as the Sun in Taurus forms a quincunx to Saturn in Sagittarius. With all the forward momentum, you may find yourself suddenly wondering if you’re going in the right direction or whether you are up to the task. Most likely you are on both counts but don’t be afraid to pause and check in with how you are feeling. The Sun in Taurus likes to know exactly where it is. Being a fixed sign, Taurus can get stuck in certain patterns. They are safe and comfortable. But Saturn retrograde in Sagittarius is calling for a review of your belief systems. Sagittarius is a mutable fire sign that is restless for different experiences. Saturn wants you to define where you want to go and to review your own personal philosophy on life. The Sun however is in ‘I’m ok right here, thank you’ mode so there’s the dilemma. It’s about adjusting your position so that you can comfortably embrace new possibilities that have the potential to bring further growth and stability.

Some help comes in the form of Mercury in Taurus sextile Chiron in Pisces. If you think about it, you’ll find that most of this reluctance stems from old wounds, impressions from the past that steered your thinking in a certain direction. Dig over the old ground to breathe life back into your thinking.

Some irritation continues on the 25th April when Venus in Gemini quincunxes Pluto in Capricorn. Now Venus is uncomfortable. Mostly in Gemini, she likes things light and sociable but Pluto would like her to take things seriously for a moment. Maybe it’s just that there’s a whole bunch of other things you’d rather be doing than work right now. It’s possible that you’d like to get closer to someone but you’re unwilling to open up to a deeper and more serious connection. Despite unwillingness, you still crave something more so dissatisfaction results. It’s about being honest with yourself about what you want right now.

The First Quarter Moon at 5 Leo also occurs on the 25th April. A Conservative, Old-Fashioned Lady Is Confronted By A “Hippie” Girl. Bearing in mind that the Moon is in Leo, this Moon-Sun square asks you to check in with who you really want to be. Don’t be afraid to express who you really are no matter what the fashion! Neither the old fashioned lady or the hippy girl are wrong in the fashion sense or attitudes so the question is what’s right for you? Sometimes too, we can learn a lot from those who look different or have different values. Conservative or outgoing, the only problem is when you get stuck in identifying with one or the other. Your identity can be changed, moulded and shaped according to what your heart desires to express and how you feel.

Venus is in a much better mood by the 26th  April as she sextiles Uranus in Aries. Now here’s something far less scary than Pluto and we get a push to embrace the unconventional. Venus and Uranus are positively playful.

One night stands, speed dating, long distance relationships all bring a level of excitement and anticipation if that’s your thing. Socialising in general gets a boost – perfect for a Sunday afternoon gathering with friends. This is a creative aspect that prompts experimentation with new techniques and novel ideas. Try something new. You might like it.

Image by Danielle Winter – Thank you  🙂