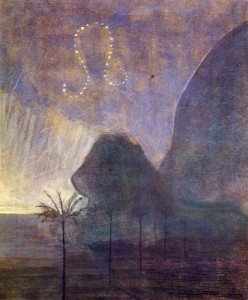 Following up on my last post, I have decided that I will be posting the monthly forecast on my website in text format rather than video. However, I will be making shorter, impromptu videos on astrological knowledge and know-how much in the same vein as the one I made about Progressed Mercury Stationing Retrograde. Videos are fun but also very time consuming with editing!

I also want to say a huge THANK YOU to everyone who sent me kind and supportive messages after my last post about being ill. Whilst I still have some ongoing symptoms, I am ready to get back to work properly 🙂 Recorded readings will be back on the site available to purchase from Monday.

And so without further ado, here is the forecast for July 2015…

July started in style with a Venus conjunction to Jupiter along with a sweet Sun-Neptune trine on the 1st July and then we had the Full Moon in Capricorn on the 2nd July.

Mercury enters Cancer on the 8th July and on this date we also have Mars trine Neptune and a Last Quarter Moon in Aries so this is quite a busy day astrologically. When Mercury transits Cancer, our thoughts turn to home and family. The mind is concerned with what makes us feel safe and nurtured and cared for. Communications during this transit tend to be more emotional and instinctive and whilst this means that we are more able to express our feelings, there can also be a danger of taking things too personally. With Mars also trine Neptune on the same day however, this would be the perfect time to talk through problems with a partner, friend or family member as this aspect is less guarded and more open to peaceful interaction.

The Sabian symbol for the Last Quarter Moon is :-

It reminds us that sometimes it’s wise to simply listen or be silent. The Aries Moon is challenged by the Cancer Sun to smother is normally impulsive and sometimes selfish behaviour in order to make room for the feelings of others.

Tensions arise mid month as we move into a run of challenging aspects. Venus in Leo squares grumpy Saturn retrograde in Scorpio on the 14th July which may make us feel down in the dumps, like someone took our favourite toy and hid it! Venus square Saturn can also bring up more challenging issues regarding self love and self worth. Often we can feel not good enough. Diva Venus in the entertainment sign of Leo gets a dose of stage fright with this aspect, suddenly scared of her audience’s reaction. We may feel similar, afraid to put ourselves forwards in case we aren’t received in a favourable light.

These feelings are compounded by both Mars and Mercury opposite Pluto on the 15th July followed by a Mercury-Mars conjunction on the 16th July. These are argumentative, manipulative and possibly aggressive aspects. We may try to force others to do our will or we may be on the receiving end of controlling behaviour. With the Venus square to Saturn, perhaps we think we deserve this bad treatment.

So the question is, how can we use these aspects positively? Firstly we can define our boundaries and let others know what is acceptable and what isn’t. Venus square Saturn challenges us to love ourselves warts and all. It’s also about adopting a mature attitude. Not everyone is going to like us – and that’s OK. Mars opposite Pluto can help us to recognise where we may be projecting our blame and anger onto others. Owning difficult and sometimes dark feelings gives you back your power. It’s about learning to express anger and assert yourself without losing control.

Venus enters Virgo on the 18th July but she won’t get very far in here as she will turn retrograde on the 25th July. For a few days, Venus drops her fancy dress and dons her business attire as she moves into practical mode. With Venus in Virgo, love is verb.

The Sun moves into its ruling sign Leo on the 23rd July. Even though we have Venus retrograde, there is still an emphasis on looking for the enjoyment in life. The Sun shines brightly in this sign. In Leo, we are all stars. Consider, what makes you shine? What makes you feel more alive? Let others see what you can do. Show off your skills and talents and add a little spice and colour to your life.

The First Quarter Moon in Scorpio on the 24th July is on the Sabian symbol :-

A Crowded Sightseeing Bus On A City Street

Scorpio by its nature is secretive and private so with the Sun in look at me Leo, there’s tension between being seen and unseen. Maybe you feel as though you are more of an observer than a participant in life. We can learn a lot from watching but at some point we have to play an active part.

Mars squares Uranus on the 25th July, the same day Venus turns retrograde. Venus retrograde gives us time to re-evaluate our relationships and also our money. During this period, the question is ‘is it worth it?‘. Venus will be retrograde until the 6th September so there will be plenty of time to reassess. I will be writing more about this retrograde in a separate post.

Watch particularly for unexpected happenings in relationships. Shocks and surprises can manifest here but bear in mind that Venus still has a long way to go before making any decisions. Mars and Uranus can urge us to be more spontaneous which can be a refreshing influence however, bearing in mind Mars is in the mothering sign of Cancer – it can be a case of throwing the baby out with the bathwater! Positively speaking though, this aspect can help us to cut apron strings and allow us the independence we’ve been yearning for.

Uranus stations retrograde on the 26th July. Uranus is an inventor and a scientist. He’s forward thinking and constantly rocks the status quo. Uranus retrograde tends to make us as the question ‘why?’. As the cosmic awakener, Uranus will prompt you to consider where you need more freedom although watch the urge to rebel just for the sake of it. Open your mind to the intuitive flashes that Uranus often brings. Spend some time considering what needs to change before implementing change.

The end of the month sees a Blue Moon or in other words, a second Full Moon of the month. This lunation will be in Aquarius on the 31st July. Along with the recent Uranus retrograde, there’s a strong need for space under this Moon. We may be more detached, more objective. Aquarius has a cool response.

The Sabian symbol for this Moon is : –

So one of the themes of this Moon is about how you present yourself to the world. The wax works may look beautiful but they aren’t real. Being real means showing your quirks, your differences and your originality. Being on display, this Moon may make us conscious of the differences between us. With the Sun in opposite sign Leo, it’s about staying true to our hearts and not worrying about trying to please all of the people all of the time.