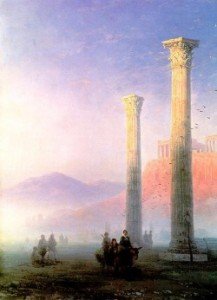 Realising that the people of Greece are voting today, I decided to have a quick look at the chart. I loaded up the first chart listed on my astrology program and was amazed by the extraordinary transits that are occurring so I just wanted to share a few points here.

There are several charts for Greece. In the past, I have used the Greek Treaty chart dated 3rd Feb 1830 but the chart I am using here is the chart of the Greek Democracy – 24th July 1974 4 a.m. Athens – source data Nicholas Campion’s ‘The Book of World Horoscopes’.

Firstly, my eye went straight to the transiting North Node conjunct the natal Moon-Pluto conjunction in the 3rd house. Honestly, this could not be any more expressive of what is happening! The North Node is ‘the way forward’ – a great cosmic signpost. In mundane astrology, the Moon symbolises the people, the general public. Pluto is change/transformation/elimination. It rules the 8th house in the natural chart* so has an affinity to ‘debt’.

Right now, the people of Greece are voting yes or no to further austerity measures imposed by the EU. Essentially though, most consider that this vote really translates into whether Greece will continue to be a member of the EU.

So the people (the Moon) are voting on whether to change (Pluto) their relationship to their neighbours (3rd house). The third house in astrology is also linked to communication – the voice. In this case then, we can see that the voice of the people has the power to change everything. The North Node’s presence here says that whatever is decided, this is the way it was meant to go. Karma, destiny, the Gods, the universe – whatever you describe it as, is drawing Greece onto its karmic path. The Node will be exactly conjunct the Moon-Pluto conjunction on the 16th and 17th July 2015.

The Sabian for this Moon-Pluto conjunction is :-

So this suggests that either way, this will be a new start for Greece.

The Progressed Moon will conjunct the natal Midheaven on the 1st August. The Midheaven is what we aspire to and is also the public face we project to the world. The progressed Moon’s conjunction here is another confirmation of ‘the people have spoken’. It’s heard loud and clear with the MC involved.

The MC is on the Sabian symbol :-

Wow! Quite an extraordinary symbol considering the people of Greece have been made to suffer due to the greedy and unscrupulous practices of those in power – generally the rich 1% who have more than the rest of the 99% put together. It isn’t about a lack of wealth, it’s about a lack of power. If nothing else, it makes me think that Greece is making public (MC) the malpractice of those at the top…back to Pluto.

Natal Pluto is already buzzing with energy because of the Cardinal Grand Cross last year which occurred slap bang on the Ascendant-Descendant  of this chart. Pluto is still close to the Descendant in the 7th house – the house of agreements. Pluto’s presence here shows a change or end to an agreement. This Pluto conjunction to the Descendant is a series of five hits; three have already occurred, the last two will be on the 29th August and 21st October 2015 so by the end of this transit, things will have irrevocably changed. The 7th house in mundane astrology specifically relates to relations with foreign countries. Pluto’s presence here shows the sense of it being an openly hostile force. Pluto is also symbolic of ‘crisis’. The fact that the EU are trying to impose certain constraints on Greece is a very Pluto affair.

I’m noting that the transiting Sun is on the Ascendant of this chart today, making me wonder if this indicates triumph for the Greek PM. I’m honestly unsure, but it catches my eye. The Sabian for the Ascendant is :-

Either way, Tspiras is going to be ‘facing the dark’.

Saturn (austerity) rules the Greek Descendant and will conjunct Neptune on the 26th November this year – typically this transit is associated with dissolving dreams. Reality comes crashing down when Saturn hits Neptune. In personal charts, it’s a time when we see if our dreams really can be materialised. Positively speaking it can mean bringing a dream into reality. Neptune rules the Greek 9th house of international communications and laws. Saturn is also the co-ruler of the 8th house of debt.

Chiron transiting in the 9th house has been conjunct asteroid Juno suggesting broken (Chiron) contracts (Juno). The next hit will be on 21st September. Progressed Venus will form a sextile to natal Uranus on the 11th December this year and then move towards the same again with natal Uranus in 2017. Venus symbolises money and she is currently progressing through the 2nd house of resources. Uranus is in the 4th house of home turf. This aspect suggests that this is an opportunity for financial (Venus/2nd house) independence (Uranus).

I’m watching Chiron heading towards a series of five conjunctions to the MC which will occur from 2016 – 2018. When Chiron transits the MC, we project either our woundedness or our ability to heal and often it’s a little of both. Probably I could say this without astrology but I imagine things may get worse before they get better but that said, the powerful North Node conjunction to the Moon and Pluto suggests that there is a bigger reason for whatever is happening and that this is a necessary process. A great deal can be learned from what is happening. Chiron is also a mentor, the key and the bridge builder. Whatever happens next, Greece as a country will heal from it.

Whether the Greeks vote yes or no is up to the people of Greece but certainly these extraordinary transits shows the depths of the crisis and that this is part of the profound changes indicated by the Cardinal Grand Cross and the Uranus-Pluto square.

I don’t tend to make too many political points as politics doesn’t interest me at all. To me, the entire system is corrupt. My thoughts are press a button, wipe the debt.  Reading the news, I see a lot of comments along the lines of ‘Greece has made its bed and now it has to lie in it’ but it’s not Greece, it’s the people – the people who are trying to live their normal lives. The people like you and me who have had access to their funds limited. The people like you and me who are being forced to lie in a bed of nails created by a faceless minority who are pulling our strings. My hope is that the Moon-Pluto conjunction in the Greek natal chart brings power to the people, not just to Greece but to the world community – and the North Node’s transit in Libra redresses the current woefully unequal economic balance so we can all live in a fairer world.