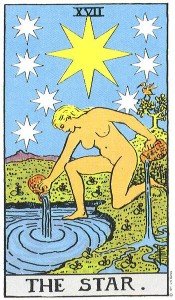 Card Description
A naked woman kneels at the edge of a pool. Her right foot is in the water, her left knee and foot lay on dry land. In each of her hands she holds a jug of water. Her right hand pours water into the pool. Her left hand pours water onto the grass where it trickles back into the pool. Although it is night, we can see the verdant green of the grass and flowers growing around it. In the background on a hill is a tree heavy with yellow blossom. At the top of the tree is bird which according to Rachael Pollock in 78 Degrees of Wisdom is an Ibis sacred to the ancient Egyptian God Thoth.

In the skies above we see seven large, eight-sided, white stars and a giant yellow star at the centre also with eight rays. The large star at the centre could be Sirius, the brightest star in our sky and considered sacred in ancient Egypt. The return of Sirius to the pre-dawn skies (the heliacal rising) was a herald of the annual flooding of the Nile and the ‘dog days of summer’. Sirius’s reappearance marked the beginning of the new year in the Egyptian calendar and symbolised the rise of Isis from her time in the underworld with Osiris. It’s also possible that the Star could represent Venus who is both morning and evening star. Another obvious connection is that perhaps this is the star that the three Magi (astrologers!) followed to find the newborn Christ child – another symbol of hope.

The eight points on the stars could allude to the eight fold year of the pagan calendar, the eight pointed star of Isis or the nautical compass that guides ships through the night. Eight is also related to this card as the number seventeen in numerology adds up to eight (1 + 7 = 8) and therefore The Star has a relationship with The Strength card. The number 8 is connected to the idea of ‘as above, so below’.

The image of this card relates to ‘the Water Bearer’ symbol of the sign and constellation Aquarius. Aquarius is an air sign of higher communication, objectivity, groups and networks. The bright yellow of the main star in the card, along with the yellow blossom perhaps also alludes to Aquarius being connected to intellect as this colour is associated with communication. The background Ibis reiterates this message as it is said that Thoth created writing.

As the card following the Tower, the Star represents a return to faith and hope after a time of crisis which may have stripped us bare. The figure in the card pours the waters of eternal life. With the water trickling from the land to the pool and the flowers dotted around the pool’s edge, it indicates that everything returns to source. Life is cyclic as we can see with the perfect circular ripples in the pool. There is a sense of being refreshed and renewed and ‘born again’, naked as a babe.

The star remind you that are guided, that you have a place in this vast cosmos. Everything is connected. Everything flows into one. The bird on the tree encourages you to elevate your perspective to get the big picture. Often this card appears to confirm synchronity events and is a reminder that there is a vast pattern to events flowing from one life-time to the next. Whilst science tells us that stars are born and die just like us, their constant and seemingly unchanging presence in our life time brings a sense of the eternal. Consequently, the Star reminds you of you own inner divine spark, that part of you which cannot die and cannot be crushed by the likes of the Tower.

When the star appears, maybe you have set a new goal, one that perhaps may not manifest for some time to come but it inspires you nonetheless. It can denote ‘recognition’. The Star is a sign that you are on the way towards achieving your highest potential. Aquarius is a future orientated sign. Perhaps you are prepared to ‘go the distance’ in some endeavour or relationship. Sometimes this card comes up to represent the idea of an unknown destination but still you have begun the journey.

Maybe you hold a wish deep in your heart. Even if current life circumstances are challenging, the Star reminds you to have faith. Faith will guide you through, whether faith in yourself or faith in a higher power. Believe!

Aquarius as a sign is connected to February and the Pagan festival of Imbolc in the northern hemisphere. In the Christian calendar February is also the time of Candlemas. Both Pagan and Christian festivals are concerned with purification so the appearance of the star can indicate cleansing. A useful way of using thr energy of this card would be to physically and psychically clean and cleanse your home and body, especially after going through a challenging situation.

Lastly, this card can come up to indicate the practice of astrology so it could be a useful time to have a reading with an astrologer or alternatively to begin to study astrology yourself.

With the Star reversed, this immediately brings a sense of the underworld journey of both Isis and Venus. There may be a loss of hope, a lack of direction, a feeling that you have no idea where you are going. Maybe you have lost your faith. The pool appears like a vortex so sometimes it can feel like being sucked up into events that are spiralling out of control. Emotions may have clouded your belief that things can get better. You may feel hopeless, helpless and on your own. Maybe you have made yourself ‘untouchable’ for fear of being hurt. It may be hard to understand how events are connected or you feel disconnected from those around you. You may feel like a little fish in a big pond, insignificant, small. With other negative cards, it could be the denial or refusal of hope. Sometimes, a reversed Star card in an otherwise positive reading may mean that you are holding back from your dreams or you are hiding your gifts.

I have faith
I trust the universe