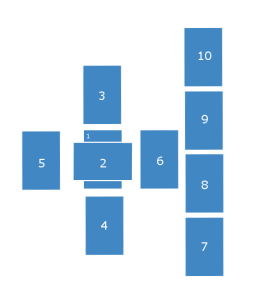 Q. What spread do you use most often/prefer and why?

I absolutely love the Celtic Cross but it’s a Celtic Cross with a twist as I add cards at the end. When I’m reading for clients, sometimes I stop with the traditional last card; at other times I’m prompted to add the extra cards. You can see an example of my ‘extra card’ Celtic Cross below. I think of it as an expanded Celtic Cross.

The Celtic Cross is probably the most well known of all tarot spreads. Originally published in Waite’s Pictorial Key to the Tarot, its popularity spread far and wide. Some see it now as dated but others like myself feel that it’s a spread that has many rich layers of investigation and interpretation. Sometimes, even if I use another spread to start with, I will move the cards drawn from that spread into the Celtic Cross afterwards (without further shuffling and drawing more cards if the original spread was less than 10 cards) in order to see the bigger picture.

I’m struggling to remember when I first came across this spread, perhaps it was from the little handbook that came with my Rider Waite deck, but I do remember being shown the spread properly when I worked on a tarot line for the first time way back at the beginning of the 90’s. When I started work on the line, I worked purely intuitively initially, drawing cards randomly without any spreads but I slowly developed my own spread for readings as well as using the Celtic Cross which I will talk more about in a later article in this series. But I do remember an elderly reader talking me through the card positions.

As I will be writing more about this spread at a later date, I won’t include all the positional meanings right now but I will talk about the extra cards I use.

Originally, I think this developed from drawing extra information cards, most likely after a challenging final card prompted a need to explore things further! Basically, the seven cards surrounding the final card can generally show what is surrounding the result. Often I find it indicates energies and situations that will be coming in at a future time soon after or around the time indicated by the last card. Sometimes they show timing or give a head’s up.

As I read my own cards regularly, I note how some influences here seem to evaporate as potentialities are changed through our own actions or by those of another. But some cards remain and then slowly, over several readings, start to drop down into the Celtic Cross, as if they gather weight and form, moving through the staff (the four cards in a line to the right of the spread) and eventually into the main cross and finally out through the past card. I call these moving cards ‘travellers’. They are like wandering minstrels who come to tell us a story; travellers who bring messages; movers and shakers who come into our world as experiences to help us learn and grow; archetypes that come a-visiting. So I pay attention to them. Again, I have way more to write about these than I can do justice in this piece so that’s something to save again for another day.

Returning to my favourite spread, I also note what I call ‘the cover card’ (in the photo to the right, it’s the Six of Pentacles). This is the last card drawn after all the others have been laid out, including my extra cards. This technically sits on top of card ten and shows a possible other outcome or qualifies the outcome card. I also take note of the hidden teacher, the card at the very bottom of the shuffled deck that doesn’t appear in the spread but often starkly speaks of the real question under the question (in this spread to the right it was the Ten of Swords). I’ve been looking at this base card almost since I began using the cards. It seems as instinctive to look at what didn’t show up as what did. I never had a name for it aside from just calling it the base card until I saw the phrase ‘hidden teacher’ which fits perfectly. It could have been Mary Greer who coined the term but I may be mistaken. Either way, the card that doesn’t appear still has a lot to say through its silence.

What I like about the Celtic Cross is that it gets to the nitty gritty. It shows you what’s blocking you, how you’re thinking/approaching things, what’s brought you to here and how you hope to move to the next stage. It shows the complex dynamics of conscious and unconscious and allows us to see what is unfolding from all of this. Using the extra cards can also help to divert energies that threaten to take us on a difficult path towards a more open route. Sometimes, they just remind me of what may be forming later down the line so I can adjust accordingly. The Celtic Cross is both a bird’s and worm’s eye view of life where past, present and future roll into one. Some people feel this spread is too ‘fixed’ with its final ‘outcome’ card. Personally I don’t find this. Certainly it seems that some things are ‘fixed’ that cannot be changed but they are far and few between when it comes to our own personal hopes and dreams. The outcome card can switch with a change of perspective and action, usually shown through the initial mini cross at the start of the spread (the first 6 cards).

The Celtic Cross in many ways is my ‘no BS’ spread – which is also how I refer to the Rider Waite deck! It gives it to you straight yet at the same time has an elegant poetry to it.