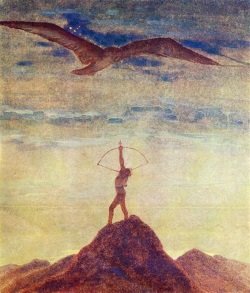 Mercury enters Scorpio on the 2nd November, perfect for prayers for the Dead on All Soul’s Day. We turn to discussion of deeper and darker subjects after the socially polite conversations of Mercury’s transit through Libra. We’re no longer asking ‘what do you do for a living?’ because what we really want to know is what scares them, what are they passionate about, what was their darkest hour? Coming off the back of Hallowe’en/Samhain celebrations, thoughts of life, death and horror stories are still firmly on our minds. Mercury in Scorpio wants to know the truth, however dirty it is. We are more perceptive and occasionally more paranoid as we question who and what to trust. Knowledge is power.

The 3rd November is astrologically busy. First up is a sweet kiss between Venus and Mars in Virgo but relationships need handling with finesse as we also have the Last Quarter Moon in Leo setting the showy, playful Leo Moon against the dark and intense Scorpio Sun. The Sabian symbol for this Moon is :-

And that’s probably exactly what we want to do: hang like a monkey, kick our feet in the air, feel the pull of our limbs, the scrappy bark on our hands. The problem is that deeper concerns also call us. Perhaps the solution involves making sure we address issues that need to be attended to but also make time to play. Indulge your inner child now and he/she is less likely to play up later.

With the tension with the Scorpio Sun and the background Venus-Mars conjunction, it’s possible that conflict could arise in relationships where one party feels that the other isn’t taking things seriously enough. With Venus and Mars uniting in practical Virgo, actions speak louder than words.

Still on the 3rd, we also have Jupiter perfecting an opposition to Chiron. No pain, no gain. When confronted with your hurt, do you deflate like a balloon or resolve to face it with optimism? With Jupiter connected to higher education and Chiron a mentor, there’s a great deal to be learned if we can sit with the pain, acknowledge it for what it is and re-frame it into a positive picture.

Sitting with the pain might not be so easy however when Jupiter quincunxes Uranus on the 5th November and this plays right in to the New Moon in Scorpio on the 11th November. The Moon and Sun now form one leg of a yod formation as they quincunx Uranus and sextile Jupiter. Yods are uneasy, feelings are intense in Scorpio and it’s difficult to distance ourselves enough to get a handle on it.

The clue lies in the Sabian :-

This vividly conjures up an image of the High Priestess in the tarot. We must be willing to enter into these mystical and unknown realms in order to make the best use of the opportunities available to us. Embrace the mystery. Use your intuition.

A collective karmic shift occurs on the 12th November as the North Node enters Virgo and the South Node enters Pisces. It’s time to move away from the fantasy (Pisces) and get down to practical details (Virgo). This is about learning what is best for us in real terms, letting go of draining relationships or psychological blocks where we are inclined to play victim.

Another energetic shift also occurs on the 12th November with Mars entering Libra. Now in the sign of his detriment, Mars has to change his normal way of working to function at his best. Whilst passive aggression can be the shadow side to this transit, positively speaking, we are motivated to find where we agree rather than disagree. Whilst we may feel somewhat socially restrained in expressing annoyances, it’s important to express anger as nicely as possible so that it doesn’t end up being projected willy-nilly on unsuspecting bystanders. Occasionally the cry of ‘it’s not fair’ may be heard as Mars likes things to go his way but Mars can work wonders here fighting for the rights of others.

Neptune stations direct on the 18th November. We have been through a period of reflection where perhaps we may have become more aware of illusions, fantasies and ideals. As Neptune stations direct, it’s influence in more palpable. We may be more dreamy, more vacant, easily moved or easily deceived. Neptune by its nature distorts like being in a hall of mirrors and it’s hard to discern between the blurred lines of reality and unreality. Stay aware of what is happening today, your thoughts, your dreams and subtle hints from the universe guiding the way.

The First Quarter Moon in Aquarius occurs on the 19th November. Emotionally we are detached, distant, needing space but the Scorpio Sun is inclined to hold on and sometimes to suffocate. The Moon is on the Sabian symbol :-

This indicates that perhaps something from the past can be revived or given a fresh perspective.

Mercury enters Sagittarius on the 20th November, followed closely by the Sun on the 22nd November. We enter a lighter and brighter period initially and hearts and minds turn to far off places, travel, study, anything that broadens the mind and gives us a better understanding of this complex world. It’s the big picture that matters now. Expand your horizons.

Mars moves into a stabilising sextile to Saturn on the 24th November, perfect for negotiating contracts and agreements in a mature manner. We need to hold on to this productive, conciliatory energy as we move towards the major challenging aspect of the month which is Saturn square Neptune and nothing about this aspect is easy. The Full Moon in Gemini on the 25th November captures the Saturn-Neptune square which perfects on the 26th November. The Full Moon is opposite Saturn and square Neptune forming a tense t-square pattern. The Moon is on the Sabian symbol :-

This can be a beautiful degree, reminding us of bygone times, old memories stirred with a large spoonful of nostalgia. But the touchy t-square is asking us to remember things as they were, not what we wished them to be. Romanticising the past takes away from the present. Dreaming of the future takes us away from the present. No matter how beautiful, how compelling these hazy, romantic views are, Saturn asks that we be in the here and now.

With Saturn square Neptune, reality meets illusion and the two cannot co-exist. Saturn-Neptune transits are tough because they tend to dissolve dreams. Bubbles pop as if they never existed. But no matter how tough Saturn may feel on your Neptune vision, know that Saturn really does have something better in store because ultimately this is about making real those dreams that have concrete potential. It’s a test of faith. Don’t lose hope.