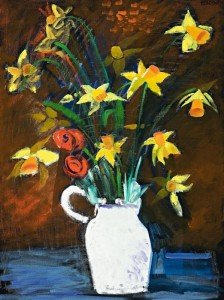 Take a deep breath, we’re diving into deep astrological waters! We have a gathering of planets and points in Pisces, six conjunctions to the South Node, major aspects between the big planets and on top of it all, it’s eclipse season!

The first thing I want to discuss it the series of conjunctions to the South Node. In order of play we have:- the Moon (9th March), the Sun (11th March), Mercury (17th March), Chiron and Ceres (24th March), Venus (29th March). With the powerful emphasis on the South Node, something about March will be continuously asking us to look at old patterns of behaviour. It’s like the cosmos is saying over and over again ‘let go, let go, let go’ but maybe you fear letting go because you’re worried about being washed away. The truth is that the tide is changing. There’s a shift coming and either you can struggle against the tide and tire yourself out or you can go with the flow, trust, surrender.

For the collective, the South Node’s passage through Pisces requires that we let go of those things that hold us back from fulfilling the path of the North Node. The shadow side of the South Node is feeling like a victim, defeatism, rescuing others (to our own and their detriment), spirituality with no practical application, idealism without substance, escapism. This is what all of us both on an individual and collective level need to address. By confronting these collective and individual shadows, we can then tap into the gifts of the South Node such as spiritual awareness, faith, a strong sense of meaning, using our imagination, positive idealism, compassion – all this attributes can then be put to work in service of the North Node in Virgo. This is one of those times when the old phrase ‘The Gods help those who help themselves’ seems to reverberate from the skies. We can’t just pray, we need to actually do something.

The Sabian references the Biblical story of Moses who received the Ten Commandments on two stone tablets as he stood on Mount Sinai. It doesn’t escape my attention that the story first appears in Exodus which immediately makes me think about the mass exodus that is occurring now with refugees fleeing the war in Syria which is still occurring despite radio silence in the media. It makes me wonder what laws may be changed in the mundane world during this time and what will be the implications. There are huge rumblings in the States in the presidential run and here in the UK, the EU referendum (dear Gods, let me still be able to move to Portugal!) could have major repercussions. In our own lives, we may be ‘changing the rules’ after receiving inspiration or divine intervention through dreams, visions and synchronicity. Again there is a subtle hint about putting the new ‘rules’ into practice. It bounces us straight back to the message of the Virgo North Node which is all about practical application as well as standing by our personal truth. All of this will be an over-arching theme during the month.

March kicks off with the Last Quarter Moon in Sagittarius on the 1st March. What is usually a buoyant Moon is tempered by a conjunction to Saturn, square to Jupiter in Virgo and square to the Sun and Neptune in Pisces. The Jupiter and Neptune action seems to be promising great things but Saturn insists you keep your feet on the ground. You may have a heavy feeling of being held back, like someone has got a tight hold of your reins but it’s important now to check in with yourself to see if things are manifesting in the right direction.

Juno stations retrograde in Scorpio on the 2nd March so there’s a push to review contracts and agreements both written and unspoken. With Juno stepping back through Scorpio, power dynamics in intimate relationships come under close scrutiny. Juno is utterly loyal but in the myths, she doesn’t put up with Jupiter’s dalliances – in fact she quite regularly gets her revenge! But the problem is that this type of relationship can become very wearing, very quickly. Love can turn to hate. Ultimately Juno’s retrograde period in this intense sign can bring us closer together but only with brutal honestly and a willingness to take ownership of emotional baggage.

Mercury enters Pisces on 5th March. The Pisces tidal wave is building. Logic must give way to intuition. Mars enters Sagittarius on the 6th March but this will be a comparatively short visit for Mars due to the retrograde that’s coming in April. Still, some of the wilful intensity of Mars in Scorpio lifts and our battle focus switches. During this transit, you may feel more passionate about your beliefs and want to defend your vision of the world as it ‘should’ be. Maybe you’re fighting for change, defending other cultures religions or championing causes around education. In the mundane world, there may be more vehement conflicts between those of different religions and we may see episodes of culture clash. With the Sun also square Saturn on the same day, it could be difficult at times to maintain faith in outer structures or authorities. Jupiter’s quincunx to Uranus also on the 6th March throws in a curve ball. Whilst it’s expansive, electric, bright with possibility, it’s also awkward and ripe for rebellious extremes. Again you’re pushed back to question what you believe (Jupiter) in the face of awakening (Uranus).

The Pisces Solar Eclipse on the 9th March may be another curve ball. Eclipses tend to reveal what’s hidden and are by their nature, unpredictable. With the eclipse conjunct Chiron and Ceres, opposite Jupiter and square Saturn, we’re surfing an emotional high tide. The Sabian symbol is :-

A Master Instructing His Disciple

This eclipse will challenge us to consider whether we feel nourished at a soul level. With Ceres, it may bring up issues around the imbalance in the distribution of food in the mundane world. Where there is excess (Jupiter), where there is lack (Saturn). Pain can be caused by either or both (Chiron). Individually, we must be open to learning and willing to be taught.

Venus enters Pisces on the 12th March because well, Venus likes to be where the party is and everyone who’s anyone is attending this pool party. Venus joins the Sun, Mercury, Neptune, Chiron and the South Node. Venus is Pisces brings a soft focus to everything. This is a sweet, kind, compassionate influence which can sweep us up on waves of romantic idealism.

We come up for air somewhat on the 15th March with the First Quarter Moon in Gemini square to the Pisces Sun. Emotionally we’d like the facts even if our intuition is pulling us in a different direction. The result may be somewhat scattered.

Jupiter’s second trine to Pluto occurs on the 16th March which could perhaps be seen as a force (Pluto) for good (Jupiter). Belief plays a significant part in the process of transformation. Provided we play nicely with this transit, then on an individual level, we could see significant developments in the areas of life described by the houses where Jupiter and Pluto are transiting in the chart. As Jupiter is retrograde, don’t expect everything to come at once but the step by step nature of Virgo should help you to recognise positive movements. The only down side is that trines can sometimes send energies out of control as there’s nothing to halt the flow between the planets. In the wider world, we may be contending with displays of megalomania.

The Sun enters Aries on the 20th March, beginning Spring in the Northern Hemisphere and of course we celebrate International Astrology Day! The Aries ingress chart is used to gauge developments in the mundane world. With Chiron conjunct the South Node in this chart and the overflowing Pisces emphasis, the line ‘Sorrow’s springs are the same’ leaps to mind. (*Gerard Manley Hopkins ‘Spring and Fall‘). I find myself hoping that Saturn’s squares to Jupiter, Chiron and Neptune will provide a much needed anchor.
But in our own lives, the Aries ingress is a time to celebrate, to welcome a new astrological year. It’s time to be brave.

Mercury follows the Sun into Aries on the 22nd March and then we have the second square between Jupiter and Saturn on the 23rd March. Expansion meets contraction. I often call this the ‘sensible’ transit because these two planets can work well together if we can get over the frustration of Saturn scrutinising our every plan. Whilst it true that growth may begin to slow, this transit can help us to catch up with ourselves. The house that Saturn is transiting through in your chart shows where you need to be realistic right now. If Jupiter’s exuberance is about to jeopardise Saturn’s hard work, you’ll be the first to know about it. There’s no need to get despondent though. Take some time to review your progress and adjust your position accordingly. Saturn stations retrograde on the 25th March anyway and this begins a five month period where it will be necessary to check in with current commitments and responsibilities to ensure you can manage what you have at hand before you explore further opportunities (Jupiter). This is a time to finish what you have started rather than starting something new.

The month ends on a serious, Saturnian note with the Last Quarter Moon in Capricorn on the 31st March. Emotionally we recognise the need for a slow, cautious, considered approach but that Aries Sun is like rocket under our backsides insisting we need to act and act now! Again, it comes down to being a grown up and delaying our excitement for a more opportune time. Play it by the book. If it’s worth having, it’s worth waiting for.

I will be choosing a winner of a 60 minute audio reading at random from those who are subscribed to the blog at the solar eclipse. Do keep an eye on your inbox as I will email the winner to let them know. Please add [email protected] to you safe sender list.

Painting – ‘Daffodils in a White Vase’ by Charles Blackman