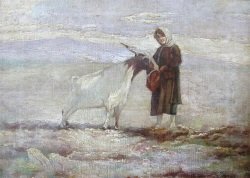 As I start this post, I’m listening to ‘Running up that Hill’ by Kate Bush. Capricorn, the ancient sea goat has sure-footed hooves to climb mountains and this is what is required during this lunation. As a sign, Capricorn is associated with hard work, responsibility and self discipline. With Capricorn’s symbol having the tail of a fish, it’s not that it’s forgotten feelings, it’s just that these have been contained in order to get the job done.

There are times when we have to grow up and keep going, even when we’d prefer to curl up on the sofa with a good book. Capricorn is a sign of maturity and what is necessary now is the adult response. Back on the 4th July, the tender New Moon was faced off by scary Pluto in Capricorn and hiding behind Mum’s skirts was a tantalising option. Now, we’re out there in the world, with all its demands and expectations and we’re conscious of our public image. The opposition from the Moon to the Cancer Sun shows we’re still aware of our more sensitive, private selves but there’s a need to be more direct in our approach. Tension exists however between work and home life and somehow we have to strike a balance.

What was started at the New Moon is now brought to a head. This can be a time of triumph as you reach the summit or a time of frustration that nothing seems to have changed. The Moon is square to Uranus which is rattling our chains. Capricorn’s natural conservatism is sometimes the smart move. We all need the stability that Capricorn offers but sometimes the ‘it’s always been done like this’ attitude can close down other more viable options. The square from Uranus suggests that there is a need to upgrade our approach, bring in new ideas and allow for change. If the view from the top of the mountain seems to look exactly like the one climbed before, then it’s likely that the work is no longer contributing to growth. The chart reminds me of that quote which is usually attributed to Einstein “The definition of madness is doing the same thing over and over again and expecting different results”. Capricorn is all about results. If you’re not getting the results you want, Uranus could be your friend here, even if it makes your nerves crackle to try something new.

The Moon is part of a kite pattern with sextiles to Mars and Chiron who are part of a waning Grand Water Trine with the Sun. In the natal chart, this pattern is often associated with ‘high flyers’. So there’s strong potential here. The sextile to Mars is motivating. The sextile to Chiron helps us to keep climbing the mountain, regardless of blisters! A wide trine to Jupiter keeps the tone optimistic and promises benefits if we can overcome any resistance from this Saturn ruled sign.

Saturn himself is still squaring Neptune, firmly insisting that we deal with the reality rather than spacing out on idealism. Supportive trines to Venus and Mercury means we can put our money where our mouth is. Venus-Saturn is happy to delay gratification. Mercury-Saturn gives a serious attitude and mental discipline. “You got this” says Saturn.

The Full Moon is conjunct asteroid Megaira. Megaira was one of the Furies who caused jealously and was the punisher of crimes such as infidelity. It’s possible that underneath Capricorn’s poker face is a simmering pile of envy and a sneaking desire to go one better than every one else. This is less helping someone up the ladder and more stepping on fingers on the rung beneath. Some may be dealing with issues around professional jealously. Positively speaking, jealously/envy can be a useful emotion as it puts us viscerally in touch with what we feel we lack. If we can own these difficult emotions, much can be learned about where our own foundations are shaky.

A large aviary may give the birds plenty of space to fly but ultimately they are caged. This Moon then asks you to look at where you too may have invisible walls erected. The achievement so prized by Capricorn can sometimes slip out of sight because we are working against ourselves. The aviary is noisy with the sound of birdsong. Likewise, sometimes we too have too many voices that have been internalised from the past – particularly those of authority figures such as our parents. And it’s these voices that can cage us when we’re not looking.

Whilst this Moon is challenged by Uranus and underlying issues from Megaira, supporting aspects from Mars, Chiron and Jupiter suggests that challenges can be overcome in true Capricorn style. Reaching the pinnacle is possible. Sometimes you just have to steel yourself and keep going.