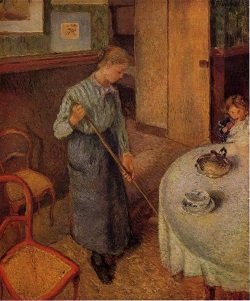 Maybe Mercury is being kind. I haven’t felt his influence unduly since he entered the shadow zone. Granted I’m a little snowed under as I juggle client work, writing, keeping on top of my health and planning my latest project to decorate the house. Pluto, battering his way through my 6th house has taught me (or rather forced me) to realise that I needed to change my routine if I was going to get anything done. So now you’ll find me with a rock solid routine that for the most part I adhere to as I happily check off the ‘to do’s on my immaculately organised Trello list.

Virgo loves to be organised. It’s the second of the Earth signs, famed for its efficient and practical approach. Where Taurus deals with basic practicalities, Virgo refines them. Yes your bread and cheese will keep you alive says Virgo to Taurus but wouldn’t it be better if it was home-made spelt bread with a smattering of pumpkin seeds accompanied by a lovely slice of Gorgonzola artfully arranged to appeal to the eye as well as the stomach? Virgo takes our basic survival skills and improves upon them. Instead of sitting on a stump of wood, Virgo carves it into a chair.

With Virgo, we start to see the details. I know that as I have started to think about decorating, I find myself picking fault as I walk from one room to the other – that needs to be painted, that needs to be changed, that doesn’t look right there. I’m become super conscious that my house is not an accurate reflection of who I am today (the Mercury retrograde will fall in my 1st house of self).

The problem during the retrograde period is that we may find it far to easy to criticise and overemphasise the things that just aren’t quite right. Whilst it’s important that we attend to these things, it’s equally important that we don’t find fault so much that we end up falling into Pisces patters (Virgo’s opposite sign) – guilt, overwhelm and feeling like giving up.

Generally, with Virgo being a mutable sign, change is easier as Virgo is flexible. We too need to be flexible during this retrograde period and be willing to make improvements. The areas of life most associated with Virgo are health, the day job and routines so all of these come under the microscope as Mercury back-steps through this sign. Whilst it may seem less than glamorous to pay attention to these areas of life, the point is that the more we simplify, the more time we have to do those things that matter most to us.

With Mercury ruling Virgo, whilst we are clearing out the clutter in our cupboards, we are also clearing out the clutters in our minds. I often say that tidying the house is my way of tidying my head. This is the perfect time to sort out your desk or filing, re-vamp your diet and exercise habits, work out a more functional day to day routine. It’s also time to reflect upon where your inner critic may be holding you back.

Mercury stations retrograde in Virgo on the 30th August at 29°Vi04′. An anaretic 29th degree tends to function in a more extreme way. You may be more conscious of the MESS, especially as Mercury is in a wide opposite to wounded Chiron too. Mercury is strengthened however by firstly being in the sign he rules as well as cuddling between benefics Venus and Jupiter. Venus says she would like things to be more beautiful and harmonious please. Jupiter says he knows that some investment now will pay off later. We could learn a lot during this retrograde period. Mentally we see that there are going to be some benefits to re-organising and reviewing our processes. Whilst it’s messy, we’re likely to be able to see the potential.

Mercury stations on the Sabian symbol :-

This symbol tells us how we need to approach the task at hand. Now we need to concentrate, to stop getting distracted or procrastinating over what needs to be done. The 12th of Never has finally arrived! Mars and Saturn are still conjunct which could emphasise the feeling of a slow down but these two working positively together can help us to break through blockages. The key to making it work is to start work says Mars and Saturn together.

Mercury will head on to conjunct Jupiter on the 2nd September which hopefully will keep us focused on the positives. The bumpiest time in the retrograde period falls from the 9th to the 12th September when Mercury will quincunx Uranus (stress), oppose Chiron (hurt) and square Mars (anger). Virgo can sometimes have a cutting tongue when feeling flustered so during this period, it will be important to recognise where stress levels are rising before they hit the point of no return.

The clue to resolving the problem lies in the Sabian symbol of Mercury’s inferior conjunction to the Sun on the 12th September. I see this conjunction as Mercury returning to source for his divine instructions from the Great Sun God.

The Sabian symbol for this conjunction is :-

Virgo’s loveliest attribute is that she’s here to serve but sometimes this can degrade into feeling like a slave. If we’re doing all the work, we need to delegate. We may need to enlist helpers. Working as a team may get a lot more done than working alone. On an inner level, this is about checking in with yourself that all sides of you are playing the game so to speak. If you’ve got one aspect of your personality refusing to join in, then it’s harder to complete the task because you’re fighting against yourself.

A basketball game also has rules of engagement. If you break the rules you lose points. If you’ve made a plan, stick to it. If you haven’t made a plan, create one. Some structure allows you to create enjoyment in your life.

After the Sun’s conjunction, it feels like we’re on a role as Mercury sweeps in to trine Pluto on the 21st September. When you need help with a clear out, Pluto’s your man! The ruler of waste and rubbish is only too happy to oblige. Mercury trine Pluto is perceptive. Maybe by now we’re clearer about what needs to go and what needs to stay. Maybe we know now what is fixable and what is broken beyond repair. 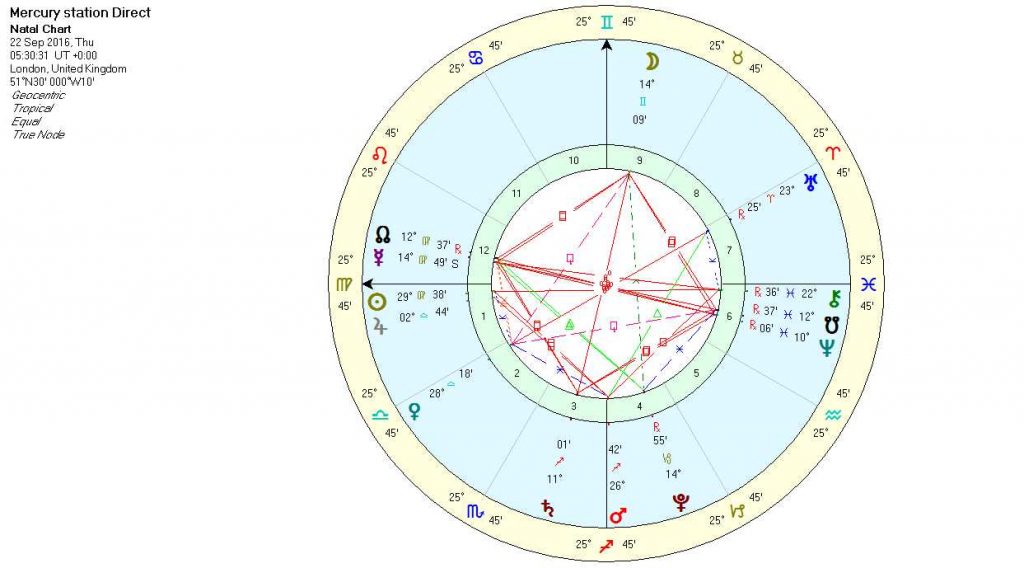 Mercury’s station direct occurs on the 22nd September. Interestingly the Sun now has reached the exact degree where Mercury started his journey. It feels like now we can see the light. Mercury however is opposing Neptune and square both the Moon and Saturn and naturally we may mourn whatever it is that we had to let go of during the retrograde period but still, Mercury’s conjunction to the North node suggests that we know it’s for our own good. With improvements in the physical world, there is now room for spiritual evolution too.

The Sabian symbol of the station direct is :-

This symbol emphasises the beauty of putting the work in. The fine lace handkerchief takes a great deal of patience and skill to weave. Sometimes we too, have to be patient as we weave our lives into a thing of beauty. Maybe this retrograde period offers us time to unpick what was woven incorrectly or recognise where holes had formed in our lives. It’s a process of restoration.

And on that note, I’m off to order WD40, paint and a spirit level. This house is going to be darn near perfect by the time I’ve finished with it 🙂

Mercury retrograde through the houses