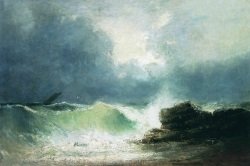 The Lunar Eclipse in Pisces is an emotional high tide. It makes me think of being on a surfboard, scudding across a beast of a wave as the crest begins to fold and you’re wondering whether you’re going to stay upright or be flung head over heels by the force of the water. The Moon is in a tight conjunction to Chiron which means we are very sensitive to being hurt.

In Pisces we are wide open with no defenses, especially as the Moon squares warrior Mars. In fact, it may be the case that we are pushed to let down our defenses and really allow ourselves to feel. So often we try to tough it out, brave it, stiff upper lip it until our mouths are drawn so tight we can’t speak and our bodies so rigid with tension that we feel like we’re going to snap. But this watery Moon says, we have to go with the flow, wherever the flow goes because we can’t avoid what hurts.

Chiron is both the one who wounds and the one who heals the wound. The wound itself is the way to healing – like cutting open an infected sore until it bleeds clear. I mentioned in my September forecast that Barbara Hand Clow likens Mars-Chiron aspects to going to the dentist so with this aspect triggered by the eclipse (and perfecting on the same day), there is a sense of trepidation. But Chiron isn’t your botch-job dodgy unlisted dentist in some dank corner of nowhere; he’s the gentle doctor, handling his patients with all the care in the world but knowing that sometimes the path to healing must begin with a painful cut. If you’ve ever had an abscess, I imagine you’ll know how welcome the sting of the lance can be.

And our part is to surrender, to accept that healing is needed and necessary, to put trust in the universe that what comes is for our benefit. Wide oppositions to both retrograde Mercury and Jupiter (out of sign now in Libra), suggest that it may be hard to see the benefits and difficult to think about or articulate. But some things can’t necessarily be put into words. Some things can only be felt at soul level. Let go of trying to find an explanation. Accept what is.

It may be that the wound or pain is centred around old anger with the square to Mars but a semi-sextile to Uranus suggests that what is awakened now can offer a new perspective. A trine from the Moon to Vesta is like performing ceremonial ablutions, washing ourselves with holy water in preparation for further dedications. There is something sacred about this painful process. The Gods haven’t abandoned us, they are carrying us. The are the giant wave beneath our feet.

Even in the Sabian we have a story of cleansing, of removing what is ‘corrupt’ in order to return to sanctity. Sometimes, the wounds we carry have a way of infecting our faith in ourselves or in others (eclipse opposite Jupiter) and render us unable to make decisions or vocalise what we really feel (eclipse opposite to Mercury).

Pisces is the last of the signs in the zodiac. In Pisces, ego is released and we merge into the whole, recognising our interconnection with All That Is. In Pisces we transcend the ordinary and embrace the extraordinary. Here is the place of imagination, the great sea of the collective unconscious where Gods and Goddesses roam and the veil between the worlds is thin.

Chiron represents the archetypal shaman who drinks intoxicating and poisonous herbs in order to see the world beyond the one we see. The spirit of the plant becomes an ally on the shaman’s spiritual path. Chiron orbits between Saturn and Uranus and therefore is the bridge between limitation (Saturn) and freedom (Uranus). Sometimes pain is the breakthrough.

None of us like pain. We seek to avoid it at all costs but during this lunation, the challenge is to go towards it willingly – to go back to the source, especially as this is a South Node eclipse. We have to accept the pain to dissolve it. It’s about actively (Mars) seeking out where we inflict pain upon ourselves through ignoring old hurts or leaving conflicts (internal or external) unresolved. It’s about knowing we are braver than we ever imagined.