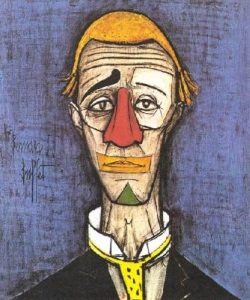 This Supermoon in the fiery sign of Aries packs a power punch and is the last Full Moon before the US presidential election. Its now a no holds barred, all out fighting event and there may be shocks and surprises all round, even before the election itself.

Don’t you love farce?
My fault, I fear.
I thought that you’d want what I want…
Sorry, my dear!
And where are the clowns
Send in the clowns
Don’t bother, they’re here.

Lyrics from ‘Send in the Clowns’.

The Moon is tightly conjunct Uranus who likes to throw the odd cosmic curve ball. He is the joker, the mad Fool who speaks curious truths. As the higher vibration of Mercury and a transpersonal planet, Uranus relates to the ‘group mind’. The gauge of our collective mental health is on red alert. The action of Uranus often destabilises as it shakes us free from constraints. He’s the alarm clock that blasts you awake from your slumbers, the surprise ‘boo!’ as you walk around a corner. The sinister scary clown phenomena has become more prevalent as Uranus (surprise) and Pluto (terror) begin to draw closer together again. According to Ben Radford who wrote the book ‘Bad Clowns’, ‘clown sightings are more common during periods of social anxiety’. Whilst the Moon is just out of range from a square to Pluto, the conjunction to Uranus informs us that behind these masks is something far more scary.

And then we have Eris in the mix, conjunct Uranus and the Full Moon. Eris is the Goddess of Discord and she loves to play mind games. She presses our buttons because there are buttons to be pressed. In my article on Eris I wrote :-

On a wider level, Eris exposes polite society and shows it for what it is with all its faults, inconsistencies and phony faces. She says it’s not hard to find the dirt when you look. She makes everyone see that the Emperor has no clothes. Eris shows those nasty little pieces of ourselves that we like to pretend aren’t there and certainly don’t like anyone else to see.

Exposure is a theme in this chart with Mercury perfecting a square to Pluto just a couple of hours before the Full Moon. Pluto’s secrets are likely to be outed by the square to verbal Mercury but they could be twisted out of shape until we don’t know what is truth or what is lie. Trigger happy Mars, the ruler of this lunation, is heading towards an ominous conjunction to warring Pluto so battle lines are drawn and guns cocked. Debate may fall into argument with Mercury squaring both. The controversial stories bubbling up at this time may be somewhat disorientating with the Moon’s semi-square to Neptune. The hot Mars square to magnifying Jupiter is inflammatory and tempers raise over judgemental attitudes and self-righteous opinion. Some are in danger of becoming a caricature of themselves.

“Clowns hold up a mirror on society, so we can see the absurd in ourselves”
David Kiser

Mercury’s square to Mars and Pluto suggests we’re talking about grubby little secrets – or damn great big secrets blown wide open for all to see. We’re also debating (or quarrelling) over the darkest depths that lurk in the collective unconscious. Scary clown Trump is the manifestation of the worst of our shadows yet whilst he may be a terrifying prospect for president, he serves a purpose in outing material that society has needed to address for a long time. Our collective mental health may be teetering on the brink of madness but the action of Uranus has also the potential to be a breakthrough rather than a breakdown. It’s about being brave enough to rip off the mask of ‘acceptability (the Sun in Libra) and show the dark heart at its centre (the Sun is conjunct night Goddess Nyx and fertility Goddess Haumea). Libra is far too nice to talk about endemic racism, gender inequality and abuse of women that breeds voraciously in society. Libra says the status quo is fine, thank you very much. Eris has no such qualms about mentioning the unmentionable!

Both Uranus and Eris are there to show us what needs to be changed. Eris may seem spiteful but there’s method in her madness. Uranus too says there are alternatives that we haven’t looked at. Now more than ever, we are due for an upgrade to our collective software that has been on the blink for years.

Mars’s trine to the North Node shows clearly that our actions can change the unfolding future and in Capricorn, it specifically shows that we need to decide now who and what we are going to choose as our authority. The Mars sextile to Neptune is the one forgiving aspect in this chart that suggests now is the time to listen to our intuition, to practice compassion and take up the mantle of spiritual (Neptune) warrior (Mars).

Blown Inward By The Wind, The Curtains Of An Open Window Take The Shape Of A Cornucopia

Our minds must be open in order to receive the abundance of the universe. There are blessings even amidst the madness. Uranus is associated with flashes of knowing, immediate insight. Cosmic downloads are possible when we clear our minds of the detritus. Each of us has a responsibility to face our personal shadows in order to cast out the collective shadow. The wealth and health of the world is at stake.

This Full Moon in Aries asks us to assert the rights of those who others would silence (Mercury square Pluto). Knowing who to trust is key but first of all we have to trust ourselves. We have the power (Pluto) to act (Mars) and therefore we must be confident; stand up and be counted. Sometimes, with Mars conjunct Pluto, we have to be brave enough to take our place on the front line and fight for truth.

What is the Creepy Clown Craze?
Clown Sightings: The Day the Craze Began

Send in the Clowns: Lyrics