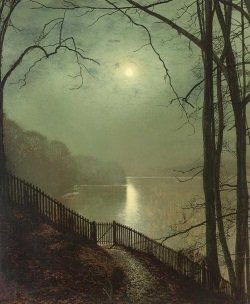 After all the noise of the last Aries Full Moon, this lunation feels intensely quiet. The Moon and Sun conjoined in Scorpio brings conscious and unconscious together and in this moment of inner alignment, we’re plunged into the darkest reaches of the self. In these shadowy places are our greatest fears and passions. It’s the terror of death and sometimes the terror to really LIVE. Scorpio rules those kinds of endings that are absolutely final, the loss that we must grief for and accept. It rules that heady moment when there is only skin against skin and nothing in between you and your lover. There’s nothing insipid about Scorpio, what it feels, it feels down to the bone. It’s raw and unbridled and has a curious magnetic compulsion that draws us deeper.

Scorpio rules all that is taboo. I remember being told when I was young ‘never talk sex, politics or religion when in company’. My Grandmother was a Scorpio, intensely private. The fear of loss of control meant that when she was given an anaesthetic, the doctors ended up black and blue with her punches. In her drugged state she fought unconsciousness with every ounce of her strength. My demure Nana was horrified when she found out what she had done! The unconscious is a powerful thing. What we don’t talk about takes on weight and gravity, building muscle upon Plutonic muscle, exercising an instinctual force for survival. The secrets we hide grow bigger, year after year twisting their way up from the grave like skeletons from the Walking Dead. The bones only rest when we acknowledge them, say a prayer for them, sit gently with them.

This New Moon falls just before Samhain/Hallowe’en as well as All Souls and All Saint’s and the Mexican Day of the Dead. At this time of year, as the nights begin to draw in and the foliage withers and dies, Death comes knocking in the form of little kids dressed up in scary costumes and we carve pumpkins to shoo off ‘The Devil’. Horror films play on a loop and Mars square to Uranus in this chart is like the electric shock of surprise as the big bad leaps into view and you fall giggling in a heap, hair still standing on end. Death and fear are uniquely bound. It’s fear of the unknown that gets us but Scorpio knows that the path of the unknown is the one to take, especially as the Moon and Sun are sextile the North Node, pointing the way towards evolution.

Those of us who practice a spiritual tradition may visit the grave of loved ones or create ancestor altars to honour those who have passed. Asteroids Memoria and Photographica oppose this New Moon so going through old photographs and stirring memories may feel challenging but also offers great healing during this time.

This lunation is conjunct Mercury who in Roman mythology was a psychopomp, escorting the souls of the dead to the heavens. Mercury’s close proximity to this Moon means that maybe we’re talking or thinking about those who have passed – or talking with them. The Moon and Mercury are both trine to Neptune so this Moon is a spiritual communion between ourselves and the other worlds beyond. Whether the connection is to the deceased or to deities, angels or guides, the veil between the worlds is even thinner than normal at this time of year. Dreams now may be especially vivid and spirit contact too may come through the dream state. During this lunation, we’re called to listen to the space between the sounds, the whispers of the soul. Communication of all kinds lingers in the ether and if we are receptive, there’s much we can learn. Listen to your intuition.

A Calm Lake Bathed In Moonlight

Make time for reflection. Not only is there the opportunity to connect with souls who once trod the Earth but other old ghosts may come calling from deep within the psyche. Don’t be afraid. These spectres of the past are part of your history. Send back healing to bygone years if necessary. There is nothing to control, nothing to fear. In life and death, all is well. Make peace with your ghosts.