Equinox blessings to you all. The Sun entered Aries at 10:28 (UT) on the 20th March 2017 heralding the start of Spring in the Northern Hemisphere.

In Astrology, we use the Aries ingress chart to analyse the flavour of the astrological year ahead. In this post, I will examine the chart set to 0 Aries which shows the common features for all places across the globe.

Firstly, this is a locomotive chart with Jupiter in Libra leading. We are being driven right now by a need to develop our relationships, to foster a better sense of fairness and justice for all. Jupiter however is the only planet representing the element of Air here so it’s less about connecting and more about assertion with a strong predominance of fire. There’s an underlying feeling of ‘every man for himself’ and Jupiter in Libra is already compromised by the electric opposition with Uranus. We are torn between wanting to have great connections and wanting to completely go our own way. Both Jupiter and Uranus are held in check by Pluto which means that in order to come to any kind of agreement, we have to go through him first. And Pluto isn’t one to mess around. Whatever big changes are introduced now have a feeling of the irrevocable about them. Powerful transformation is possible but it all depends on how well we deal with our shadow (Pluto).

Venus is retrograde and just out of range of a conjunction to the Sun. This year ahead may contain echoes of 2009 when Venus would have been in a similar situation due to the Venus retrograde eight year cycle. We are busy re-assessing, re-evaluating our relationships and financial commitments. Venus in the self-orientated (and sometimes self-centred) sign of Aries suggests a need to get comfortable with our own reflection in the mirror. That theme is also reiterated with asteroid Narcissus conjunct the South Node of the chart however this can also mean that this is a period when we’re so busy looking at ourselves, it’s hard to make the connection that Jupiter wants (Jupiter as co-ruler of Pisces disposits the South Node). Caution is needed as we could become so wrapped up in our own affairs, we don’t see how everything else is unfolding and miss the potential for positive development. 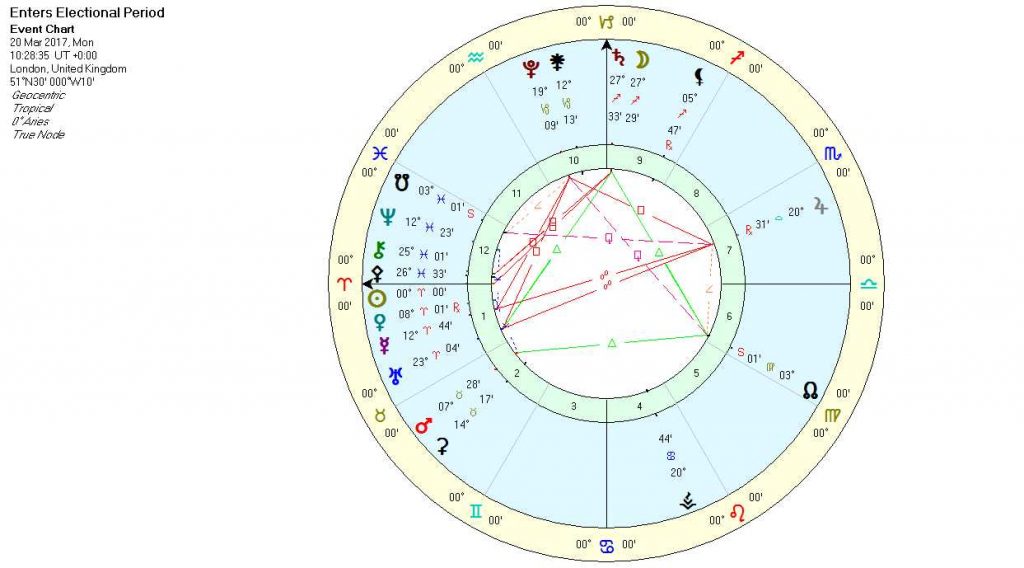 Mars, ruler of Aries is unaspected too as he doesn’t make any ptolemic aspects to the other major planets so once again we have something of a wild card here. Unaspected planets can show a special skill so in this case giving us great strength and courage – or they can be highly erratic meaning our cosmic warrior is on high alert and super sensitive to the tiniest sign of provocation. Controlling our tempers may be a challenge. Impulsive behaviour is a problem. Mars conjunct asteroid Sisyphus may be inclined to repeat the same pattern over and over. True and consistent bravery however may help to take us in the right direction with Mars trine the North Node.

The Sun is widely conjunct Chiron which gives the impression that leaders are likely to appear weak, wounded or experience chronic problems. A square from the Sun to Saturn also shows that there are significant challenges to mediate. The chronic issues of Chiron must now be acknowledged and worked with for they have been limiting us for too long. The Sun is also conjunct asteroid Hel so we cannot escape that Plutonic journey. We have to dig deep to the underbelly of society and get to know what lies there.

The Moon is tightly conjunct Saturn. In mundane astrology, the Moon represents ‘the people’ and Joe Public is not likely to be impressed with leadership efforts as Luna is tightly conjunct dour Saturn and square the Sun and Chiron. The treatment of the elderly, the sick, the infirm and the very young could be a key in how society expands and develops. People feel held back, hurt, gloomy but at the same time there is a mass maturation process that could help us to feel stronger over time.

The Moon is also trine to awakened Uranus too so whilst in some ways we could feel quite tied down, there is still a buzz of excitement that perhaps there is also an opportunity for something new emerging from this.

The Moon and Saturn also sit enigmatically on the Galactic Centre, the heart of our galaxy where all this began and to where all things return. Yes, there is a feeling that we are being sucked into a great big black whole with this aspect (!), yet also we are magnetically drawn to investigate this great cosmic soup. This aspect says to me that we know there is something bigger at work and there is major construction going on behind the scenes. We may feel sorely limited in our ability to affect change in the world but the more clearly defined our beliefs (Sagittarius), the easer it is for us to trust to a higher vision.

Out of interest, Mandi Lockly in her fabulous article links the Galactic Centre to Whistle-blowers.

Perhaps then, this is about being brave enough to stand up and be counted and consistently pass the message on. This next solar year may be defined by stories that emerge from the depths that change the course of things to come.

Below is a snippet of the post I wrote on the UK and US Aries Ingress charts. If you would like to read more, check out my Patreon page. Patreon supporters get extra posts in return for supporting me with my goal to provide you with more astrological writings!

What is immediately notable in this chart is the Midheaven’s tight conjunction to the South Node. The news that Teresa May will trigger Brexit next week was released today shortly after the Sun entered Aries. A brave, bold, rush to independence I imagine is on the mind of the PM but the South Node’s energy is draining and tends to indicate going back to old patterns of behaviour. The MC literally points to the UK repeating an old pattern. Another way of looking at this is that how we have acted in the past will certainly have a bearing on our future. The ingress chart Midheaven is also conjunct the UK’s natal 5th house Pluto. This house can relate to the House of Lords so perhaps there are repercussions or changes here too.