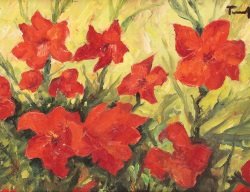 Aries, the sign of the ram, is a boisterous, fast moving, fiery sign. It’s associated with the season of spring, up-rushing energy, flowers fighting for the sun. The first of the fire signs is brave, pushing up and out into new territories. Ruled by warrior Mars, we fight for what we believe is right and battle to win. ‘Me first’ is the Aries motto and whilst the shadow side of this sign is selfishness, the positive is that it encourages us to assert our place in the world. Aries has no qualms about saying “hey, I’m here, let’s get this thing started!”. It’s Aries energy that gives you drive, initiative, passion and the will to go after what you want. Aries is the divine spark within that thrills and inspires confidence.

The only major aspect to this Aries New Moon is a conjunction to retrograde Venus. Venus herself struggles somewhat in this sign as she’s far more about creating harmony and loving relationships. Venus is all about ‘I love you’ but in Aries it’s about ‘I love me!’. Instead of striking out and starting new projects or relationships, this New Moon suggests we need to go within and bravely learn to love ourselves first and foremost. Self love is integral to the path ahead. As we reappraise our relationships and how we spend our time and energy, there is also a necessary reassessment of our core values too. A stronger awareness of what matters to us most helps us to define our goals more clearly, giving them extra fire.

Aries energy is heightened as we have five planets in this sign and Mars, ruler of this lunation, is strongly supported by a wide trine to Pluto. Trines however, whilst generally considered positive, can sometimes spin out of control, especially under this heady atmosphere. It’s helpful then that we also have a Mars-Saturn sesquiquadrate which is like a quiet, cautious hand on the reins, restraining any tenancy to use a sledgehammer to crack a nut. Instead, Saturn guides Mars to use his natural force wisely for dynamic change. We too can use our power creatively during this lunation. Just be sure to check any urge towards impulsiveness which stems from frustration.

The t-square between Jupiter, Uranus and Pluto is activated by Mercury’s conjunction to Uranus. There are bright ideas, big ideas, potent ideas but in order to create something of substance, we must understand which ideas are truly worthy of investment. Think carefully before you begin.

Hats tend to indicate something about our character or role in the world. During this lunation we must be sensitive to which way the wind is blowing as to how we present ourselves. A certain flexibility may be required. The winds from the East may also represent Eastern philosophy which tends to be more holistic than its Western counterpart. Perhaps there are aspects to your personality that need acknowledging and airing. Maybe it’s just about being able to read the signs before initiating plans.

When I was a child, I can vividly remember my Mother saying to me “Your face will stay like that if the wind changes!”. Consequently I would quickly lose the grimace or whatever stroppy face I was pulling at the time because a little piece of me believed it was true. The thoughts we hold are reflected on our faces and eventually become carved into our skin. With Venus retrograde in the picture, let love carve its lines upon your face. Re-ignite your passion for life and life will become bigger, brighter and bolder, like the piercing rays of a rising sun. New beginnings start from within.