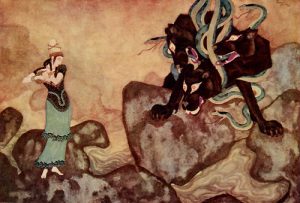 Mars trines Pluto on October 1, activating a strong Scorpionic theme that will be in play this month. Self-assertion is possible now leading to a feeling of empowerment. Mars is in hardworking Virgo so we can burn through mundane tasks easily given Pluto’s determination to clear the way ahead. What we have to watch however, is that Mars is about to trigger a challenging T-square with an opposition to Chiron and square to Saturn.

The T-square begins to build from October 3 and will last until October 20. Mars opposite Chiron is rather like a wounded soldier, forced to slow down or stop by Saturn. Mars loves to move fast, muscle his way through and just get it done but the situation is sensitive (Chiron). Maybe Mars has to move more gently for a while, consider other people’s feelings. Oppositions tend to manifest in our relationships. We might be tempted to project our weaknesses on others too during this time but Saturn says we must take responsibility for where we’ve been wounded or damaged. Mars needs to initiate repairs in practical, organised Virgo. Being accountable for our actions and sensitive to the needs of others helps us to move forwards, even if a little more slowly than normal.

This pattern is in play at the Full Moon on October 5 as Mars is the ruler of this Aries lunation. The Moon is also square to Pluto and opposite Mercury bringing in a theme of mental pressure, intense communication and even fighting talk. Black and white thinking could cause some to act out. The background T-square suggests restraint but frustration is palpable. Thankfully Saturn is coming up to a trine with the North Node on October 9, suggesting that attributes such as patience, self-discipline and a mature attitude are needed to facilitate evolutionary growth during this time.

The biggest shift this month comes with Jupiter’s entry into Scorpio on October 10. Scorpio is a fixed water sign, characterised by intensity and focus. Scorpio represents the underbelly of society, the things that we’re not supposed to talk about in polite company. It’s the secrets we hold, complexes, the dark territory of fear – sex, death and taxes is often the casual descriptor.

Scorpio is also the detective of the zodiac and it comes with an inherent ability to keep digging until it gets to the truth. It strips away at all the inessential stuff until it gets to the fundamental core of a subject, person or concept. Scorpio is the x-ray that reveals not only your bones but your soul.

Jupiter shows us where there is development potential. His entry into Scorpio suggests that we have an increasing need for truth and intimacy. We need to look at the meaning of our fear, the beliefs we hold about sex, the judgements we hold around bonding and relationships. As Jupiter magnifies what he touches, this may indicate a period where there could be greater open discussion about sex and sexuality and perhaps too a growing movement to address the growth of sexual crimes. Scorpio also rules rubbish so perhaps we could see significant growth in recycling.

Scorpio and the 8th mundane house of the global chart is also associated with shared resources. Technically Jupiter’s passage here can bring some beneficial growth to banks and a more open book approach to financial contracts and commitments. However, Jupiter can sometimes incite such optimism that we invest too far in the future, increasing debt. Jupiter will trine Neptune during his time in Scorpio so idealism too is likely to increase.

The shadow side of this transit is that Jupiter could increase our fears. The underground world of Hades is not a familiar place to sky God Jupiter and therefore seeing in the dark is not his strong point. Shadows become exaggerated, complexes expand. Fear can turn to phobia, focus to obsession.

Mars is the traditional ruler of Scorpio so his movements will be informing Jupiter of how to react to Scorpio subjects. As he runs into the square to Saturn on October 11, his advice is to stick with what we know! It’s frustrating and maybe we’re feeling blocked or up against a brick wall but we have to be patient and face reality.

The Last Quarter Moon on October 12 is in homely Cancer so part of us really wants to shut the door, curl up on the sofa and make the dragons go away. But the Moon’s square to the Sun in Libra pushes us to stay connected and engaged with life and each other. Relationships become even more of an issue when Venus enters home sign Libra on October 14 where sharing and sociability trump staying at home with a good book.

Mars perfects the opposition to Chiron on October 15 so maybe the schmoozing of Venus has lead us also to some difficult places inside, pointing out our weak points and vulnerabilities. Courage could be in short supply around this time and confidence low. Reminding ourselves of our strengths can help to keep us up and running.

Mercury’s entry into Scorpio on October 17 should help us to fend off feelings of being unprotected and open to attack with adamant resolve. A strong mind can help us to overcome physical limitation as well as fears. Communication deepens, conversation becomes more intimate. With Mercury also about to conjunct newly ingressed Jupiter too, the urge to talk about what most scares us can lead to an increased sense of being understood which can be profoundly transformative.

The discussions continue into the New Moon on October 19. The Libra Moon is widely conjunct Jupiter and Mercury. The tightest aspect however is an erratic opposition to Uranus which brings in a highly unpredictable element. Surprises could tip us off balance however alternative perspectives could be exactly what’s needed to regain equilibrium.

Mars’s entry into Libra on October 22 puts an end to the sense of slow progress and injury of the T-square earlier in the month. Mars is in the sign of his detriment here so he may take a couple of days to process Libra’s etiquette rules. We still can’t move quite as fast as we’d like as progress is reliant on compromise and agreement but striving for cooperation brings renewed strength. We can forge positive alliances under this influence, especially if we resolve to be more trusting which Jupiter in Scorpio encourages.

For some, openness is difficult, especially when the Sun enters secretive Scorpio on October 23. Trust issues could become apparent. The Sun however is illuminating these dark places within, lighting up what was in shadow before. With Mars’s urge towards shared experiences and the Sun’s spotlight on honesty, truths now have the ability to reveal rich resources at our disposal. Under the Sun’s passage through Scorpio, we can learn to own our inner shadows and see how this process of inner transformation only makes us shine more brightly.

Just in case we’re tempted to get too wrapped up in own personal psychoanalysis though, the First Quarter Moon’s square to the Sun from eclectic Aquarius on October 27, presses us to detach from obsessing over issues. What we need now is some objectivity to process the deep feelings we’ve uncovered. Group dynamics perhaps test previous trust issues. We are learning that deep bonds can still exist despite our differences.

Painting – ‘Cerburus, the Black Dog of Hades – from the Picture Book for the Red Cross’ by Edmund Dulac