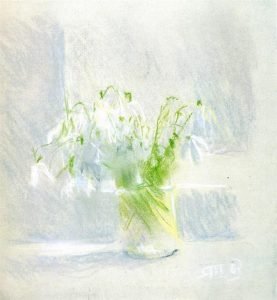 After January’s gritty reality with a profusion of planets in Capricorn, February has a very different vibration. Despite this being eclipse season, this month feels like a lull in astrological proceedings. We’re either floating through air or floating through water. February begins with a strong Aquarius edge as we now have Mercury, the Sun, the South Node, Venus and Juno all in this quirky air sign. The mood is friendly but detached. What interests us around this time are groups, networks, politics and humanitarian concepts. Social media could be in overdrive. Aquarius energy however can also manifest as restlessness. It’s electric, wired and anxious to implement change.

Both the Sun and Mercury will conjunct the South Node (February 3 and February 9 respectively) on the Sabian symbol ‘Two Lovebirds Sitting On A Fence And Singing Happily’. Twice then, we’re asked to let go of idealism when it comes to our relationships with one another. The pretty little dream is holding us back. The more we identify with it, the more we think about it, the harder it is to see each other as we really are and accept our differences. We don’t all have to be singing the same tune.

February 3 is also astrological Imbolc which occurs when the Sun hits fifteen degrees of Aquarius. This ancient festival, often celebrated at the beginning of the month, marks the first signs of spring like the snowdrops which push their heads up through frost-bitten ground and lambing season in the farming calendar. Fifteen degrees of Aquarius is the midpoint between Winter Solstice and Spring Equinox in the Northern hemisphere. Use this magical day to reflect back to mid-December. This is a turning point, a gentle prompt to move towards the light and new beginnings.

The Last Quarter Moon in Scorpio on February 7, introduces the theme of intimacy versus detachment. How can we bond at a deep level yet keep our own individuality and space? This theme then continues into the Aquarius Solar Eclipse on February 15. The eclipse is tightly conjunct Juno and Mercury and square to Juno’s husband Jupiter. The eclipse may throw up unexpected events that challenge preconceptions, judgements and beliefs about one another.  I imagine most people cringe at the phrase ‘we need to talk’ but talk we must during this eclipse period. We may be surprised or unnerved by some of the topics of conversation, yet they are necessary to move us forwards. Mercury then conjoins the eclipse degree on February 16 suggesting a quick manifestation or even resolution to this unpredictable energy.

The atmosphere begins to soften as Mars moves into a square with Neptune on February 17. This however can be a confusing pattern given to defeatist thinking and a ‘can’t be bothered’ attitude when manifesting negatively. The feisty go-get-‘em approach of Mars is flummoxed in the face of pacifist Neptune. The more we fight to go in one direction, the more uncertain we feel.  The key is to act on intuition, let go of the fight and the need to be right. It’s about letting ourselves experience vulnerability. Sometimes we must stop doing to tune into why we are doing what we do.

With the entry of Mercury and the Sun into Pisces on February 18, we shift from airy intellectualism to surfing the waves of the great sea of the collective unconscious. Emotionally, we’re more engaged, sensitive, kind, compassionate. Under these influences, warrior Mars can do no more than turn the other cheek and walk away from conflict, but this isn’t about giving up or escaping. Our actions now have the potential to contribute towards our spiritual unfolding as shown by Mars’s trine to the North Node on February 19. We need to get in touch with what’s meaningful. Pisces energy seeks to unify. With our defences down, we can let the heart lead. Venus conjunct Neptune on February 21 opens the way to forgiveness and unconditional love.

The end of February sees the Moon crossing the degree of the eclipse that took place on January 31. This is the first activation of this eclipse point so it’s possible that we may be feeling the effects around this time or starting to understand what it means for us on a personal level. Make a note of the feelings that arise on this date as they may seed ideas that bloom in August when the Sun crosses this point.