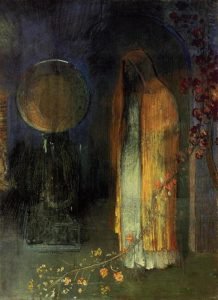 Jupiter is currently transiting through my 4th house – the house of home. Just before Jupiter entered this part of my chart, I was feeling so unhappy living where I am living that I was frantically looking at all possible solutions to resolve my dilemma. When Jupiter entered my 4th house however, I started to relax. Jupiter’s that big old guy who wraps his arm around your shoulder, gives you a cheery hug and promises everything is going to be a-o-k. Jupiter made me aware of the blessings of my extended family (my friends) and reminded me of the benefits of where I am. He didn’t tell me I can’t or shouldn’t move, only that there were other options that maybe I hadn’t considered.

It seems funny then, that I found myself looking at houses again today while eating breakfast. Browsing, considering, contemplating. It was only after opening my astrology program that I suddenly remembered Jupiter had just stationed retrograde a few hours earlier and now here was me feeling restless and longing again for a different view outside my study window.

When Jupiter stations retrograde, it can be accompanied by a feeling that what was in development has stalled. It can be subtle, or it can be stark as in my example above. Perspective shifts, beliefs change, faith wavers and we can lose sight of the big picture. The opportunities that seemed so big and bright before now appear to have a catch. Openings dry up. What was expanding contracts. Depending on the chart and aspects, some may feel that God is no longer listening, that nothing good happens or that luck isn’t on their side any more. Visions evaporate. Remember that Jupiter can blow everything out of proportion!

Jupiter’s action is to increase so there has been an intensification around Scorpio themes. Scorpio is an intense sign associated with death, change, transformation, sex, intimacy, shared resources, mysteries, the occult, taboos, secrets. I mentioned before in my talk on Jupiter in Scorpio through the houses, that as Jupiter is so large, it would be impossible to hide the elephant in the room.  Consequently, story after story emerged of sexual abuse scandals.

It’s fascinating too that it’s been during this cycle that archaeologists have discovered a giant Mayan site, deep in the Guatemalan jungle. One archaeologist said “I think this is one of the greatest advances in over 150 years of Maya archaeology’. Another said “This is HOLY $HIT territory!”. Both perfect expressions of Jupiter in Scorpio disposited by Pluto in earthy Capricorn! Jupiter is holy and Pluto, well, you can guess which one he is…

Essentially, these collective manifestations show us that on a personal level, we must be prepared to expose material that has been hiding in plain sight in our psyche.

When Jupiter stations retrograde, we must turn within. Inner growth must match outer growth. We are given time to contemplate whether we have taken on too much or whether the success we are experiencing ‘out there’ is in tune with our deepest values. Some may feel a swell of toxic material rise to the surface. Consider what is blocking your joy. Purge. Question your philosophy.

After Having Heard An Inspired Individual Deliver His “Sermon On The Mount,” Crowds Are Returning Home.

Think, what have you heard recently that rings true to you? This is a time to consider what has been learned. Sometimes we go along with what the ‘guru’ says without considering we have a direct line to spirit. The ‘guru’ can take many forms – whether literal religious teacher or the collective moral principle. Align yourself with what is meaningful to you.

On March 14, Jupiter will form a semi-square to Saturn. It’s a small test of faith or a stumbling block. Not enough to trip us up entirely but enough to encourage us to watch where we’re going. Still, strength and motivation are building, even if we’re in the dark. Jupiter’s second sextile to Scorpio’s ruler Pluto on April 14, offers us clues to navigate the catacombs.

What we may need to watch is an unwieldy sesquiquadrate to Chiron on May 22, where an over-emphasis on suffering or what is wrong could mean we miss what is right. It could be easy to lose our sense of humour around this time and feel like there’s not enough abundance to go around. Chiron, having only just begun his journey through Aries, may mean we’re super-sensitive to false starts, failed goals and lacking courage. If we can steer clear of snap judgements, there is enormous healing potential in this aspect. Still, a beautiful trine between Jupiter and Neptune takes place on May 25, the second of three. If we’ve been lost in the dark, this is like a guardian angel whispering, ‘this way’.

Now we have a greater understanding, a better connection, a new way of thinking. Now there’s a dialogue between the conscious and unconscious. The monsters lurking in Scorpio’s deep waters have a name and a voice and now we’ve got their number. We can call them up on a direct line and remind them that they are loved profoundly. As we reach the end of this cycle, Jupiter will have lead us to a deeper faith and with deeper faith comes greater empowerment.