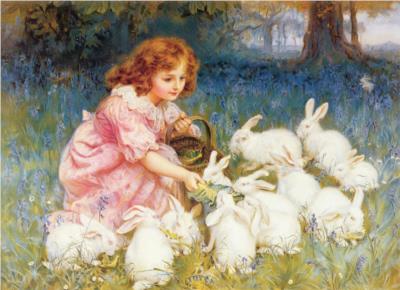 The Sun entered Aries at 16:15 (UT) on March 20, 2018 heralding the start of spring in the Northern Hemisphere. The Aries ingress marks the equinox, with the length of the day being equal to the length of the night. After the spring equinox, the days grow longer until the light peaks at summer solstice.

Spring equinox is also the Pagan festival of Oestara (sometimes spelt Ostara). Oestara was later Christianised to Easter. The symbols of fertility such as the hare and the egg are still commonplace although the hare has been reduced to a bunny! In the UK at this time of year, the scent of hot cross buns drifts through every supermarket, each bun bearing the old symbol for the Sun (a cross within a circle).

This is a time associated with abundance and the return of life. The sweet earthy Goddess of Spring is courted and tickled by the ever-warming rays of the Sun God. To celebrate this festival, go for a walk in nature and revel in spring flowers, make a Sun wheel, paint eggs with the kids or arrange an egg hunt. Plant seeds to represent new projects. Tidy up your garden or balcony. Make an offering to a tree. Buy flowers for a friend.

In Astrology, we use the Aries ingress chart to analyse the potential of the astrological year ahead. In this post, I will examine the chart set to 0 Aries which shows the common features for all places across the globe.

Firstly, this is a bowl-shaped chart with Jupiter leading. A bowl chart indicates there are issues connected to ‘containment’. Jupiter retrograde in Scorpio is committed to deepening our connection with each other so that we can be more generous with our shared resources. The 8th house is also the place of secrets, fears and taboos so with Jupiter leading this chart, the question becomes, how can we contain all of this so that our fears don’t magnify. The challenge is that there are no major planetary bodies in air signs. This indicates that it’s harder to rationalise, relate and remain objective.

The Sun is in a close but out of sign conjunction to Chiron. As with last year, there is a continued theme surrounding weak (Chiron) leaders (the Sun). Chronic issues are illuminated yet, with Chiron being in the hidden 12th house, we may not be fully aware of the problems afflicting them. Two asteroids are also conjunct the Sun. Alecto is one of the Furies who punishes people for crimes against others. We also have Nemesis who punishes those who defy the Gods. Nemesis carries with it the theme of divine retribution. Those in the spotlight may be looking for someone to blame for our suffering or deflecting our attention to scapegoats. Some may simply get their come-uppance, especially with Nemesis involved.

As Mars, ruler of the ingress chart, is tightly square to the Sun and Chiron, this introduces conflict, vulnerability and hair trigger sensitivity. It’s sharp and pointed. Mars is also conjunct asteroid Pholus. In the myths, Pholus popped the cork on an ancient bottle of wine when Heracles came to visit. The scent of the wine drove the centaurs mad. A battle ensued, and Chiron was injured. This asteroid story amplifies the sense that we can’t put the lid back on whatever has been released or aired. Once again ‘containment’ is the issue.

A wide conjunction between Mars and Saturn may prove to be helpful in that it provides some restraint but it can also generate frustration. With Mars at the edge of Capricorn, there’s anger towards leaders, authorities, systems. There’s a struggle over whether to keep the peace or start a fight. If we’re lucky, the Sun and Chiron’s trines to Jupiter may offer a level of protection precisely because of the big investments held between different countries. With Jupiter opposite to Pallas in the 2nd house though, there may be rumblings over who bails out who. Perhaps certain patterns of trading may be pushed to compromise.

With Mercury tightly conjunct Venus also in Aries, there are animated conversations going on about money and the nature of our relationships. Both Mercury and Venus are squared by Pluto in the 10th house of the chart. Who has the power and who doesn’t is also likely to be a talking point. By its nature, Venus has a softening effect but combined with Pluto, there’s a possessive edge and no one wants to be left empty handed. Aries after all, always wants to win and Pluto is a dominating force.

The Moon’s presence in the 2nd house, closely trine to Saturn and also trine to Mars suggests that collectively, people may be more inclined to take personal responsibility regarding their wealth and security. Our attention is firmly fixed on how we can survive in this world. Maybe we’re feeling more capable of taking matters into our own hands and challenging (Mars) authority (Saturn) in a way that is sensible and credible (the Moon in down to earth Taurus). Luna’s square to Ceres in the 5th house shows that some of the tension comes from wanting to protect our children. The presence of the North Node in the 5th house reminds us that they are our future. The Moon in Taurus square to Ceres may also bring in tensions surrounding the treatment of Mother Earth and food production/resources.

It’s important to note that Neptune is technically unaspected as he forms no major aspects to any of the other planets. Unaspected planets tend to be a wild card. Working negatively, Neptune can manifest as distraction, an overblown imagination, illusions, fairy stories, fiction, deception and confusion.  The Sabian symbol of Neptune in this chart is ‘An Officer Instructing His Men Before A Simulated Assault Under A Barrage Of Live Shells’. What real and what isn’t is likely to be up for debate. It’s also possible, especially with the prominence of Mars and Chiron in this chart, that we could be dealing with toxins or infectious disease.

Still, it is also important to remember that Neptune is a highly spiritual planet. Intuition is heightened. The possibility of unity may feel out of reach yet the more we show compassion, the easier it is to connect. On an individual level, the Sun’s conjunction to Chiron encourages us all to face those aspects of ourselves that are suffering. Recognising where we are wounded and also embracing our weaknesses makes it easier for us to accept each other’s frailties.

“The Sabian symbol of the [US] Ascendant is :-

At A Railroad Crossing, An Automobile is Wrecked By A Train

This is, as suggested, quite a tough symbol and it’s difficult to get away from the saying ‘ a bit of a train-wreck’ to describe things being an absolute mess! There is an implication in the symbol that the car has ignored the warning and ‘crossed the line’. These analogies may be part of the picture as we move through this quarter in the US. Crossing the line, not stopping, ploughing on regardless of what’s coming. If the powers that be continue in this manner, then the result could be catastrophic. Often this symbol speaks of being aware of forces greater than the self at work.