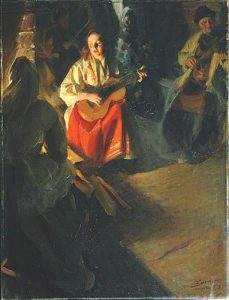 The shadow zone for the retrograde began on July 7, so mentally we may have been feeling off-colour for a while. Leo after all, likes the spotlight. The shadows, Leo says, is for the unheard and uninspired. Leo needs bright lights, attention, an audience, a round of applause with a loud bravo!

But we’re deep into eclipse season now and Mars is retrograde. The land is scorched and many feel burned out, troubled, irritated and frustrated. No one seems to know what’s going on. It feels like we’re all wandering around with a giant WTF bubble hanging over our heads!

As Mercury stations retrograde, he makes no major aspects to any of the planets so we’re speechless! We could feel unreal, detached, unable to think, out of ideas, utterly bewildered. Mercury becomes a wild card, a parody of itself. I imagine there may be more than a few people quoting the line ‘Am I talking to myself here?”!

In the mundane world, Mercury stationing retrograde whilst being unaspected could also manifest as someone saying exactly the wrong thing at exactly the wrong time. It’s like being at a club, shouting some private nugget of information into your mate’s ear when the music drops unexpectedly and now everyone’s looking at you with a stunned expression!

Mercury in Leo can be much louder than needed or intended so we too need to be careful of speaking out of turn during this period.

Mercury’s station comes in the midst of the build up to a heated, stressed eclipse on July 27. It feels like we need to act yet underneath everything is a quiet whisper “wait”. With so many planets retrograde and an unpredictable element at work, we need to let this scene play out before moving onto the next.

Mercury retrograde in Leo can feel like fumbling over lines as we try to work from a script. The problem is that the script isn’t original. Sometimes in life we end up working to someone else’s script – an internal dialogue born from family dramas and societal expectation. This retrograde gives us the opportunity to find our true voice and speak with authenticity. But before we can emerge from behind the curtain, we need some rehearsal time to get into character.

Totally Concentrated Upon Inner Spiritual Attainment, A Man Is Sitting In A State Of Complete Neglect Of Bodily Appearance And Cleanliness

Certainly, with all the retrograde action at the moment, we are encouraged to go within and reconnect with our spirituality. However, whilst this is an important first step, we cannot stay suspended in this state of contemplation. Somehow, we must strike a balance between answering the soul’s call to attend to the inner flame without disconnecting altogether. Ascension doesn’t mean losing touch with consensus reality. Pride can lead to spiritual bypassing.

On August 9, Mercury meets the Sun creating a turning point in the retrograde period. Something is becoming clearer. Ideas begin to form. Problems are illuminated.

The Sabian symbol of this meeting between the Sun and Mercury is :-

This symbol reminds us that instead of detachment, what is needed now is the warmth and community of like minds. We each have a separate, distinctive voice but it’s stronger when we sing together. It’s about having the confidence to step up and volunteer to make the world a better place, in whatever way we can. Life is a participant sport. Sitting in a spiritual bubble is not an option.

On August 11, on the day of the Leo solar eclipse, Mercury forms a square to Jupiter. The eclipse is then conjunct Mercury, amplifying the message. If we go back to the singing choir image, it’s like someone just took it upon themselves to try to sing louder than everyone else. Judgement is off kilter or we’re not seeing where we’ve been blindsided by our beliefs. We can’t force what we believe down each other’s throats, no matter how right we think we are. With the eclipse and Mercury in theatrical Leo, this could be the time when masks slip. We need to be real with one another. We can no longer play a part. I’m thinking of the play on words here too – if we play a part then we’re playing apart…

Now that the masks are off, Mercury’s retrograde journey becomes easier. A sextile to Venus on August 18 means that we’re ready to listen to one another. The more we listen, the more beautiful the natural harmony of the choir.

Mercury stations direct on August 19 on the Sabian symbol :-

Mercury will still be sextile Venus, plus trine to the Moon and conjunct the North Node.

It’s like Mercury is saying, “you guys need to learn to play together”! It’s time to gather around the campfire for a good old sing song. We’re not making light of troubles. We’re learning that there are many ways to connect. Sing from your heart. Enjoy the company of loved ones. Relax. These special moments are the light in the dark, leading the way ahead.

For further reading, you might find the following articles helpful :-

Mercury Retrograde through the Houses – For your Sun/Rising Sign