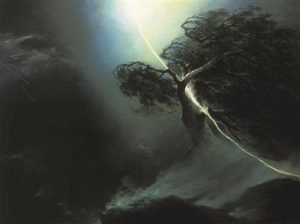 Often, when we think of Taurus, we think of placid and hardworking characteristics. Taurus is associated with the farmer. To me it brings up images of pastoral scenes of old England, paintings by John Constable, fields full of clover, the scent of ripe apples and fresh cut hay. It’s a creative sign ruled by Venus in all her luscious sensuousness. It’s farmhouse cakes packed full of dried fruits, cream teas, languid kisses and happy stomachs. I’m a Sun sign Taurus and I can attest to all of the above!

But there is also another side to Taurus. Just think of the Bull, the sign’s totem and you’ll begin to get a feel for it. Whilst this Venus-ruled sign is gentle when treated well, start waving those red flags and you’ll see the other side to it – and this too I can attest to. I have a terrifying temper, so I have been told!

Because nature always has a balance, an opposite, a black for a white, a day for a night. But those opposites are not ‘good’ or bad’. Taurus, as first of the Earth signs reminds us that nature just IS. The fox kills the hen because it needs to eat or practice its hunting skills. It isn’t evil or wrong or bad. It’s simply in its nature as a predator.

The Full Moon in Taurus brings us back to our instinctive nature and our relationship to the physical world around us. Thoughts arise such as how we feel about our bodies, the material possessions we have, money, how secure we feel. At this time of year, we can become very conscious of what we have and what we don’t have. All Taurus wants is assurance that it has enough to survive. Opposite sign Scorpio is the reaper. This is why Taurus is sometimes associated with possessiveness and insecurity, because driving the need for physical comfort is the terror of death. It’s survive (Taurus) or die (Scorpio). Taurus can be stubborn as a mule, stuck in the mud, old-fashioned and obstinate if it doesn’t embrace its shadow.

This Full Moon is a culmination of events where we can touch base with all that we have acquired, inside and out but there is a twist in the tale as the Full Moon is conjunct Uranus. This is a surprising harvest. We get something unexpected. It’s a shock, it’s a delight, either way, it’s different. Maybe we had a hint because Venus, ruler of this Full Moon, has been opposite to Uranus once already on September 12. The second opposition is exact on October 31. The last is on November 30. Venus is currently retrograde in opposite sign Scorpio, so we’re being directed to look within and explore shadow material. In the modern world, money is often linked with power but even if our bank balance is rich, we can be poor in other ways, particularly if we don’t value ourselves.

Storms are terrifying and awe-inspiring – usually both at once! Nature is so utterly unpredictable! This gives us a clue as to the nature of this Full Moon. I don’t know about you, but when I feel a storm coming, I get goosebumps. The hairs on my arms and the back of my neck raise as the static builds up.  I become jittery, excited and a little scared. There’s the anticipation, counting how long between a flash of lightning until the crack of thunder to gauge the storm’s distance. There’s the rush of excitement when fork lightning turns the sky pink and you can smell the burn. Most often, when the storm breaks, you’ll find me hanging out barefoot in the rain wearing a wild expression. Storms feel primal.

Something has been building for a while now. An imbalance has occurred. Venus, opposing the Full Moon is out of her comfort zone. Things feel complex (Scorpio) when they should be simple (Taurus). Venus opposing Uranus shows that we’re dealing with problems in relationships, inner disharmony, financial instability. Normally Taurus is a calm sign. It values things that stay the same. Change isn’t on the menu. But paradoxically, there can be no stability without change. The constancy of the seasons themselves rely on change – spring to summer, autumn to winter.

Venus opposite Uranus shows that we need to make way for new perspectives, different ways of doing things, innovation. We need to wake up when it comes to how we’re treating ourselves and each other. Our values too are changing. Note that the Moon-Sun, Venus-Uranus oppositions are square to the Nodes. This shows that the resolution of these issues is now of karmic consequence. This message is emphasised by the fact that the rulers of the Nodes (the Sun and Uranus) are also opposite one another.

With the South Node in Aquarius, we have been alienated, cold, on the fringes, remote, cut off, distant, too objective. With the North Node in Leo, the universe has asked us to step into the light, shine, show what we can do, demonstrate warmth, take part, reconnect with our inner child, play! But maybe we can only really do these things when we wake up to how precious we are. If this Full Moon makes us feel a little crazy, it’s because we need to shake ourselves free from old paradigms. Just as the land grows stale when planted with the same crops over and over, so too can our lives become stale when we continue to repeat the same old patterns. The Moon represents our habitual responses born from the conditioning we received as a child. With the Moon conjunct Uranus, we may become more aware of habits that hold us back from evolving. We need to be free.

The Full Moon is supported by a trine to stable Saturn so even though Uranus may feel like a wild card, Saturn is there to reinforce us and hold us steady. Whatever occurs during this time isn’t likely to knock us off our feet. Rather, it’s a brilliant flash of lightning, illuminating where we were in the dark before. It’s the exhilarating, thundering BOOM of truth, rattling us right down to our DNA, promising change is best for our long-term security. The storm breaks because it must to restore calm.

‘Oak fractured by a lightning. Allegory on the artist’s wife death’ by Maxim Vorobiev