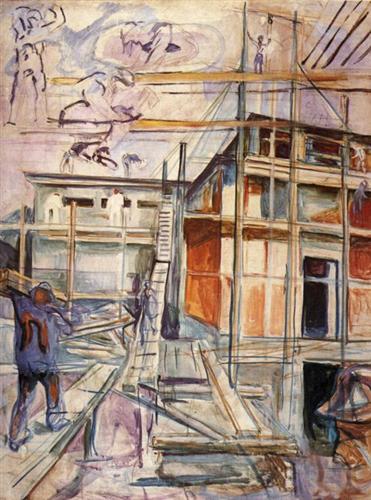 There’s no AIR in this chart, well aside from Vesta and Pallas, but all the major planetary players are in other elements. The majority are in Earth signs, with Capricorn the sign most represented. The atmosphere feels heavy, serious and like it means business. Capricorn makes sure it is always prepared…no matter what.

This is the first of the eclipses since the Nodes changed signs so naturally, we begin a new set of themes to explore and discover. As this is a South Node eclipse, what is revealed around this time is connected to where we have been stuck for too long, too rigid, too ingrained in the rules. As the Nodes are integral to eclipses, events that occur tend to be coloured by a sense of ‘fate’. Right place, right time, wrong place, wrong time, whatever is happening, it’s as though things are being engineered to bring about a certain outcome. As ever though, how we respond to these events influences what unfolds. 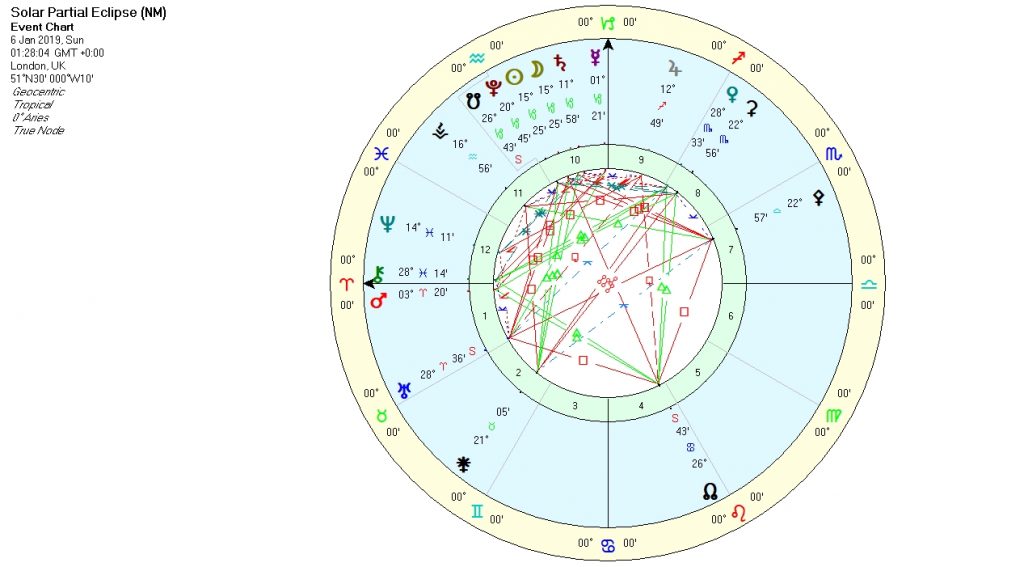 Generally, at a Capricorn New Moon, we are planting seeds for new endeavours. Capricorn is the big mountain to climb, our greatest accomplishments, lofty career and professional goals. Yet, with the South Node’s presence, it’s suggested that whatever is begun now, relieves us of striving. The North Node in Cancer shows that for all of us, we need to look more to our private and emotional lives. Capricorn, hardworking and responsible though it is, can also be inclined to take on too much. Capricorn can feel obligated and very focused on what ‘should’ be done. This is about releasing those burdens taken on in an effort to gain respect and good standing in society. Instead we need to get in touch with our own inner authority. Here we’re growing up enough to remember to be a good parent to ourselves. We need emotional support, connection, mothering, a soft place to fall. It’s not about building walls, it’s about tearing them down and holding hands across the divide.

It isn’t easy though, to let go of how things have always been. The Moon is conjunct both Saturn and Pluto emphasising the intense weight we feel on our shoulders. But it IS important. We DO need to change for long term stability and to build trust. A sextile between the eclipse and Neptune gives us a helping hand. It’s about recognising our connection and trusting our intuition. Compassion is the way forward. Let the feelings flow.

The old order (Capricorn) is undergoing a transformation (Pluto) and what we need to build (Saturn) now is something meaningful (Neptune). Look to your own personal chart to see what part of life is being deconstructed (the house where Pluto is transiting) and where you need to develop a more emotional involvement (the house where the North Node is transiting). The position of transiting Neptune is your relief point. Here is where you find meaning, imagination, spirituality and a sense of connection. Tune in to what Spirit is telling you in regards to the matters of that house and it might help the rest of the pieces to fall into place.

School Grounds Filled With Boys And Girls In Gymnasium Suits

So, we need to get fit, stay supple. Capricorn is a sign associated with rigidity, arthritis, inflexibility. Getting in touch with the physical body and taking care of this holy container helps us mentally and emotionally as well as physically.  Perhaps even more important is the ability to reframe rather than insisting on seeing the same old picture. A notable feature of this chart is that Uranus is stationing so there is an element of ‘expect the unexpected going on’. Sometimes things change in a blink of an eye and therefore flexibility in all its forms helps us to bend instead of break when life surprises us.