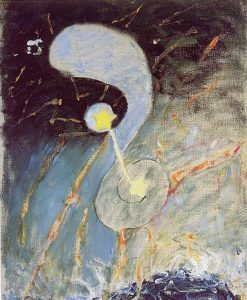 You know how it is, when you notice something and then you start seeing it everywhere? That’s me with anaretic degrees (the final degree of each sign). Right now, I’m doing a ton of research on these degrees so imagine my surprise when I see February is full of aspects that take place on these final degrees – thirteen aspects in total. This month feels dynamic and seeing as the 29th degree is also a critical degree, we could say that February is a critical turning point in our lives. The final degree of a sign has a sense of urgency about it, a powerful drive to complete its mission. These degrees can also be volatile as there’s a tendency to over-react. Not all the anaretic aspects this month are difficult ones, indeed some are trines and sextiles so there’s an invitation from the cosmos to grab hold of this powerful energy and turn it in our favour. But still, there are some tempestuous aspects to navigate along the way.

It begins with Mars squaring Pluto on February 2. This isn’t, by the way, an anaretic aspect but still, Mars is a warrior and Pluto a war lord. Both have the will and drive to keep bashing at the same problem until they find a way through. With these two at loggerheads, the problem is that no one wants to back down. We’re fighting (Mars) for control (Pluto) or we’re angry at the truth! This aspect can inspire incredible acts of courage or it can take us down the heady path of red rage, furious at the world and not scared to show it! We need to handle it carefully, gently. Things break under this influence and we can hurt ourselves or each other.

Venus enters Capricorn on February 3 where relationships become a serious issue. We may become more reserved and less demonstrative, but we are concerned with commitment. Whilst this transit is anything but flowery, Venus in Capricorn loves in a mature way. This is about investing hard work into relationships, not taking things for granted, keeping the long term in view. For those who are alone, this transit can bring up thoughts of aging alone and whether or not that seems like a nice or not so nice prospect. Maybe we want to get our money in order, decide on a pension or save for a rainy day. Spending slows down as we may become more choosy about where our hard earned money goes. As Venus rules the pleasure principle, what makes us happy now is feeling as though we’re working towards something tangible. Negatively, if we feel hampered by problems around self-worth, these issues could become more prominent during this period.

The New Moon in Aquarius on February 4 is well supported with a sextile to Jupiter and conjunction to Mercury. Something feels different, expansive and perhaps we’re ready to welcome new ideas and options. When Mars squares the Nodes on February 9 though, we’re challenged to find our courage and commit to a course of action that drives us towards easier emotional expression and support. Mars usually prefers a clear direction, but life isn’t always so obliging. It can be disconcerting when there’s no longer a hard line to follow. Perhaps Mercury’s entry into Pisces on February 10 will help us to trust our intuition more. Instead of thinking our way through it, we can now feel our way through it. Its about following hunches, dreams, whispers from Spirit. Sometimes the wandering path is the one with the greatest meaning.

The First Quarter Moon on February 12 brings the lights into a tense square between Taurus (the Moon) and Aquarius (the Sun). The new objectives sparked at the previous New Moon could now feel too different or progressive. With the Moon in Taurus, we need to feel secure. We need to know that we have food on the table and a roof over our heads. The best approach would be to allow for change but move slowly. We don’t need to jump in with both feet.

But then comes Mars in his anaretic conjunction with Uranus on February 13 and it also sparks the ongoing Uranus-Pallas opposition which stays in tight orb for the entire month. The exact dates of Uranus opposite Pallas this year are February 8, February 21 and September 11. This means that problems sparked around this period may not see a full resolution until September. Pallas is associated with negotiation, mediation, wisdom and pattern recognition. She is currently moving through Libra (and stationing on the final anaretic degree of this sign) and therefore accentuating the need for agreement and working together. Uranus however tugs in the opposite direction, pulling us towards independence and revolutionary change. Mars amps up the desire for freedom from the constraints of diplomacy. Whilst Pallas will watch her language carefully, Mars will be effing and jeffing (for my international readers this is a polite English way of talking about swear words) without a care in the world. F*ck you very much says Mars as he flips the bird at Pallas. Pallas however is going to do everything she possibly can to keep a dialogue going because it feels crucial to find a compromise. It seems funny that as I write all this, the ‘meaningful vote’ about Brexit is happening as I type!

So, February brings up dilemmas over where to compromise and where to stand our ground, when to go it alone, when to team up with others. Mars conjunct Uranus on the final degree of Aries brings the Uranus transit through Aries to a final booming close. It’s not going out quietly, that’s for sure. The biggest challenge is that patience may be in short supply and any delay could feel like torment. Guard again impulsive decisions but also be prepared to act quickly if the need arises.

Some of the heat begins to cool as Mars moves into Taurus on February 14. This slows the pace considerably and gives us staying power. The focus is on action to create tangible results. We want to see where we’ve spent our energies. If you feel frustrated, make a list of what you have achieved each day, do a time and motion study. Get a practical handle on what you are doing and why. Look for tools and resources that will help you to achieve your goals. If life is a garden, then Mars’s transit through Taurus is the digging phase where we prepare the ground for what’s to come. It’s hard work but worth it in the end. Slow and steady wins the race.

On February 18, Chiron finally makes his entry proper into Aries after a short preview last year. I made a long video about this transit here.

Chiron in Aries will be about actively finding ways to heal.  As Aries is connected to courage and fighting for what we want, we may become more aware of the wounds that make us afraid to follow our passions or defend what is right. As Aries is also about the individual, we may become painfully aware of where we don’t feel right compared to others. Some may feel not good enough, rejected, an outsider, ashamed of who they are. Deep wounds to our identity much be addressed so that we can function better. We will also need to look at how we hurt ourselves, continuing cycles of abuse from the past. When a person hurts us, we can point the finger, blame them, get angry, demand an apology. But when we hurt ourselves, how do we deal with that? Raging at the self in the end only causes more pain. These are some of the complex themes brought by Chiron’s passage through Aries.

Just as Chiron leaves Pisces, the Sun enters Pisces so there is a softening in the atmosphere. This is a time of forgiveness, letting go, acceptance. As this is the last sign of the zodiac, we can use this time to consider the past twelve months and look at what we need to release. Creatives may enjoy this imaginative period where dreams are more vivid, and we’re more easily moved by sights of great beauty and suffering. Given Chiron’s entry into Aries though, we must guard against losing ourselves in self-pity which is very different from self-compassion.

The Virgo Full Moon on February 19 offers some possible practical solutions to problems, especially those sparked by the Uranus-Pallas opposition as the Moon makes positive aspects to both. Although part of us may feel a little lost at times, if we pay attention to details and work conscientiously, we can improve the outlook. Also on this date, Virgo’s ruler Mercury will enter the shadow zone of the upcoming retrograde period so it’s advisable to focus on completing tasks rather than starting something new.

In keeping with the Pisces Sun, the rest of the month is quiet, giving us time to rest and recuperate from a busy start to the year. The final major aspect of the month is the Last Quarter Moon on February 26. This is the closing chapter of the lunar cycle; a time of introspection as the Moon grows smaller and smaller in the sky. The Moon is in far reaching Sagittarius where we yearn for truth and understanding. The Sun in Pisces however reminds us that there are things that we cannot possibly understand. But if we’re quiet and aim our hearts towards the truth, the in those moments we can catch glimpses of the beyond, shimmering on the horizon. Whilst Sagittarius always wants to keep moving, sometimes we can roam too far. If you’re struggling, stand still. Maybe what you’re searching for is already with you.