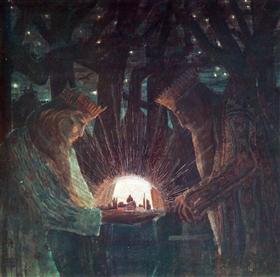 The skies are heavy with Earth energy. The atmosphere feels weighted. Only Pallas retrograde in Libra is in Air so mentally we could feel strung out, unsure of ourselves, needing someone else to validate our experience.

The chart itself is a locomotive pattern with the Moon leading. This Full Moon in Scorpio tells us that emotions are intense, and this is what is driving us forward. Feelings, fears, deep unconscious material, it’s all on show, floodlit by the opposing Sun in Taurus. The ego would like for things to be simple. “I want an easy life” says the Sun in Taurus. But of course, life is rarely so simple. Emotions are sticky, complicated things that lead us to scary places – and places of real depth, power, insight and riches.

The Sun is almost exactly conjunct Sedna so we have stories about loss and betrayal illuminated. The Moon in Scorpio desires greater intimacy but Sedna has already lost so much that it’s hard to move into a place of trust. But we need to trust. We need to have those deep conversations that speak of unpleasant things before getting to the good stuff. Mercury has just perfected a trine to Full Moon ruler Pluto. Mercury tells us that we must talk about what hurts us so that we can find our way back to the ease we yearn for. But is isn’t easy because the Moon in Scorpio likes to keep secrets. We don’t want to feel exposed. 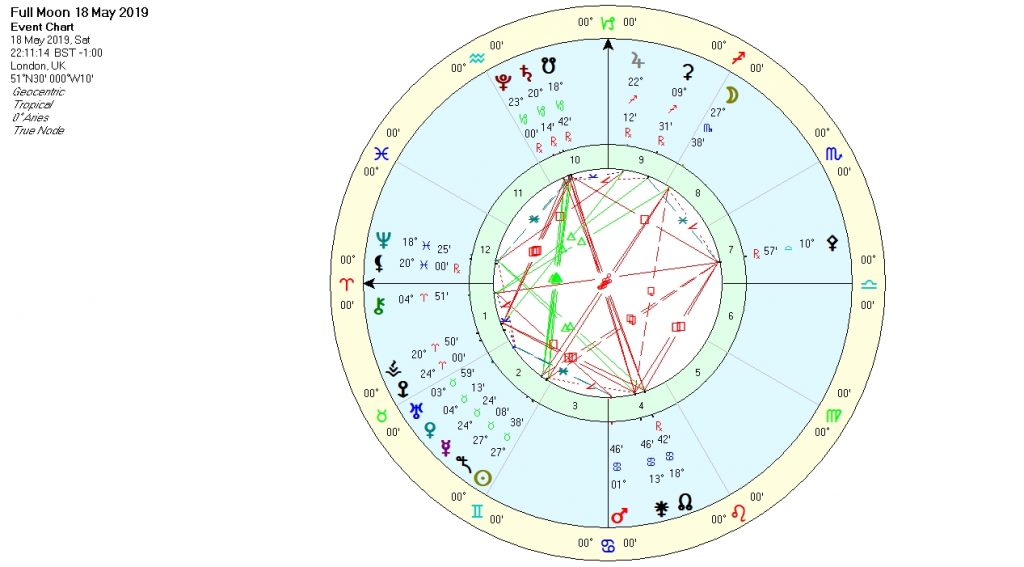 The Moon is however in a wide out of sign trine to Chiron. Here is the release point from the tension. Healing is possible. We can find our way back to one another and to ourselves if we show courage. It’s okay to be wounded, fragile, vulnerable, different.

Another important point is that Venus has just perfected a conjunction to Uranus. Note that the Venus conjunction to Uranus is the first of its kind for 81 years. The last time these two met in Taurus was in 1938. In the mundane world, this Full Moon may bring us stories about money as both Taurus and Scorpio are concerned with wealth and Venus is connected to those things that are valuable. Perhaps there are some shocking revelations, surprises around cryptocurrency, more tax revelations, banking computer glitches. Bear in mind Mercury trine Pluto could be translated as news about government, banks or taxes too!

On a personal level, Venus conjunct Uranus illustrates that despite the overt tension in this chart, sometimes people can surprise us. Sometimes we surprise ourselves. Venus conjunct Uranus is liberation from heartache and potential for an awakening at heart level. It’s like a high frequency blast of energy that shakes the bedrock of our lives and shows us what really matters. It’s the glint of a brilliant jewel in Pluto’s underworld. To release the jewel, we need to release resistance to change, no matter how insecure it might make us feel.

The King Of The Fairies Approaching His Domain

Close your eyes for a moment and imagine this glorious, otherworldly King returning to his castle. What we have here is an image of assurance, certainty, belonging wrapped up in powerful magic. Scorpio energy might be tough at times, but it strips us bare and lets us know without a doubt who we are. Like the King, we need to keep our heads held high, eyes straight ahead, fearless. Whatever happens, we are being brought back to ourselves and to where we belong.