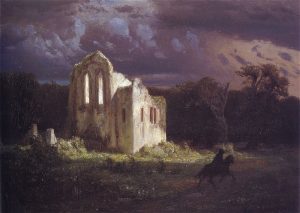 There’s no air, no air, NO AIR. It’s hard to think, hard to relate, hard to see the other side. Only Pallas is in an air sign, doing her best to help in what seems like an endless journey through Libra. This transit began last year at the beginning of November and she almost made it out. But at a critical moment in negotiations, Pallas stationed retrograde on the 29th degree of Libra in February. Then began a period of backtracking that lasted until the end of May when Pallas stationed direct. With Pallas now at 17 degrees of Libra, in the degree of the Nodes and squaring the Nodes in this eclipse chart, it may feel like we’re at tipping point. Maybe we’re concerned with whether the scales are tipping in our favour or not. The impetus is to consolidate, hold our position (Moon in Capricorn), hole up until a better deal comes along (Sun in Cancer). But the status quo has to give as a Nodal square points us to a missed step that must be completed before we can evolve. We must put aside our differences and look for common ground between us. We must find a way to agree. We need to work with one another. We need to find our balance.

The Moon is in Capricorn, traditionally the sign of its detriment. As the Moon represents emotions, we could feel like a fish out of water, exposed, raw, tender and yet still we must do what needs to be done. The Moon is conjunct Pluto, intensifying, amplifying, escalating. Moods are dark, or perhaps reflective like obsidian, taking us to deeper and deeper levels. Luna is also widely conjunct Saturn so there’s no sidestepping the personal or spiritual work. Both Saturn and Pluto are insistent that old structures (Saturn) must change (Pluto). 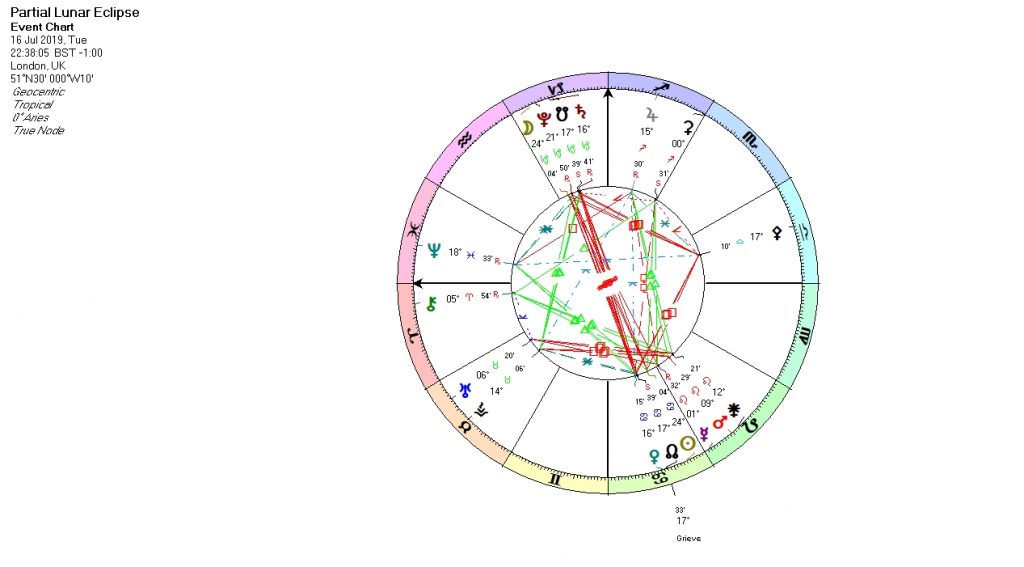 Working at its best, the Moon in Capricorn is mature in the face of gravity, consistent despite fear. Even if we’re way out of our comfort zone (Sun in Cancer), we’re required to face up to the truth, deal with consequences and manage ourselves effectively. The Moon conjunct Pluto conjunct the South Node tells us that this eclipse is potent enough to rip away false concepts. As the Earth’s shadow falls across the face of the Moon, unconscious material materialises. Old karmic lessons surface. Reality sets in, bringing us to a conclusion or crisis to clear the way ahead.

The Moon also widely opposes Mercury retrograde in Leo and Venus in Cancer so there may be an underlying or even overt sense that things ain’t pretty right now! There’s a whole lot we don’t know. We’re not feeling confident about speaking up. We’re unsure whether we know what’s best. We don’t want to make a scene. And yet note Venus’s proximity to the North Node. This close conjunction is like a quiet reassuring hug from the cosmos that whispers, keep your heart open and you will find your way.

The Sabian symbol for the Lunar Eclipse is :-

This symbol suggests that we need to make careful choices before investing time, money or energy. Maybe too we need to recognise that nothing is going to be ‘perfect’ right now. It could seem like there’s a problem at every turn, like there’s a flaw in every Persian carpet. But the flaw is there to remind us that we are fallible. We are not Gods, and nor should we try to be. With Pluto so close to the Moon, the urge is to want to take control and to have ultimate power. But we must yield to those things that we can’t change, accept that there are some powers beyond us.

This symbol also brings up the concept of haggling. I note that asteroid Grieve is conjunct the North Node. It’s possible that we could find ourselves trying to haggle with the Gods, bargaining with our souls, promising the Earth if only we can have x…y… z. But maybe it’s important that we accept what is lost to release power to our future. We can’t go back, says Old Father Time. And neither should we want to. All our power is in the present. Let the walls fall. It’s time to make choices from a place of integrity and self-respect instead of from fear.

Painting – ‘Ruins in the moonlit landscape’ by Arnold Böcklin